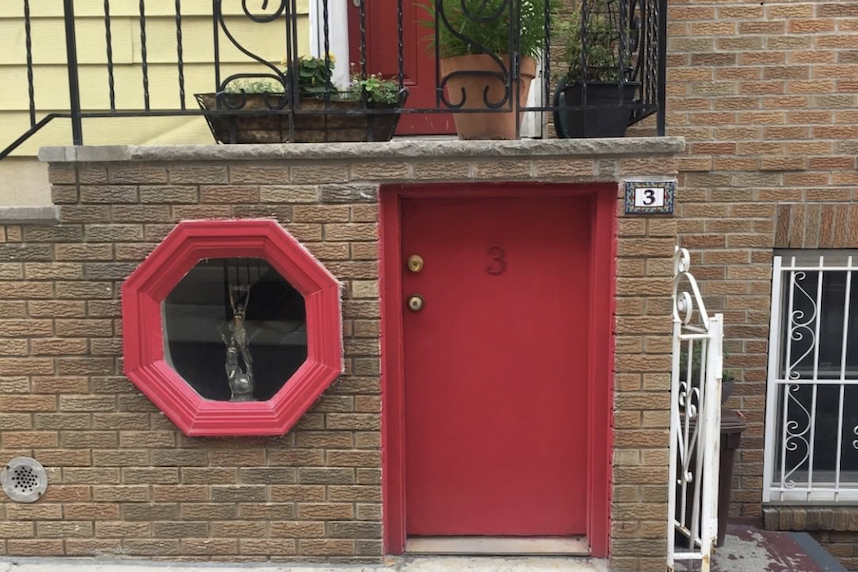 Maybe you’ve wandered down Dennet Place, the tiny, one-block stretch of Carroll Gardens that has become a Brooklyn curiosity thanks to its distinguishing feature—4-foot high, street-level doors, referred to as hobbit doors by the street’s longtime, mostly Italian inhabitants. “You bang your head on the door, once, and you never do it, again,” one 6-foot resident said as he unlocked his short, bright red door, and ducked inside.

Over the years there have been plenty of theories as to the original purpose of the doors (in fact the Brooklyn Historical Society asked us to report back with findings when we called to inquire). We didn’t find any logical or architectural explanation for the midget-sized entryways, but we did discover a million stories about the people who lived and worked inside these homes. There have also been retail stores, some official, some not, behind the hobbit doors including Mr. Frank’s Italian grocery store, Mrs. Gatto’s Bakery, Grado’s Candy Store (the last store to change over to residential housing) and a woman named Josie, who made and slung pizzas with only one arm.

Kim Hanley, a fourth generation Dennet Place resident and member of the family that owned P.J. Hanley’s bar on Court Street for many years, said that her grandfather and her uncle John (called “the golden arm” because of his dice-throwing ability) used to play craps in the middle of the street. Cops would come from both ends of the street and raid the illegal dice game while the players ran through the hobbit doors of whatever house was closest and out the back and over the garden wall to escape. Kim also reported the Saclasky’s, a family that used to live on the street took the hobbit door escape route to its illogical conclusion—saying that one member, Leo Saclasky, built an airplane behind his little door and realized he had no way to get it out and had to take the airplane apart again. “They were a peculiar family but very nice,” she said.

The super-friendly current residents include Terry Noto and her husband, who have been on the street for 18 years, and are fourth generation owners of their home, built in 1899. Her husband’s grandmother was the original owner and paid $5K for the house, which is now estimated to be worth over $1M, as are most of the houses on the street. Terry took us inside to show us her grandmother’s portrait and said of Dennet Place, “These are homes that have been owned through generations of families. This is a culture”–evident in the sweet sixteen, New Year’s Eve, wedding receptions, and Memorial Day block parties (pictured below) they throw.

Michael and Joann Mari have lived on Dennet Place for 35 years. Joann’s brother lives next door. Rocco and Dee Scarantino, a realtor with an office on Smith Street, have lived there for 13 years. Their daughter, Ruby, 17, says she loves living in the hobbit houses. The Brooklyn-famous Esposito sausage-making family lives on the block and are related to the Hanleys. Joy Boggio, of the longtime Dennet Place family the Orefices, is another notable resident. As the reigning matriarch of the block, she is called “Aunt Joy,” by everyone, though no one we spoke to was actually related to her.

Newcomers include a documentary filmmaker, Jay Nubile, his wife, Karen, and their son, Alex, and lawyers, Karin and Jamie. Karin describes Dennet as “such a warm block.” She also feels that she and her husband had an in against two other offers on their house because her mother was a teacher at P.S. 58 and taught some of the kids from the block. It’s a small world on an even smaller block.