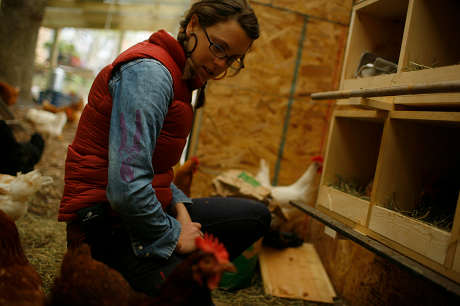 Last spring, when Bee Ayer stood inside her finished chicken coop, she thought to herself, this is bigger than my room.

“I kind of wanted to move in,” she said.

The impulse is understandable: The spacious coop is tucked away in the back of Imani Garden, a public garden in Crown Heights. A large willow tree seems to shelter the entire quarter-acre space, a green curtain blocking out the street.

Bee Ayer calls the coop “Fort Hen.” It’s solidly built, and it’s now home to about 50 chickens. Stand on the doorstep, and you can see the tip of the Empire State building.  Look down, and a chicken is probably pecking your shoe.

A similar dissonance can be created just by speaking the names of Bee’s chickens aloud: Rhodesian Red, Red Star, Black Australorp, Barred Rock, Leghorn, Araucana, Buff Orpington. It’s like speaking a lost language, from Brooklyn’s agrarian past.  It’s a good bet that no one else within miles is regularly saying these words, save for the dozen or so members of the egg CSA, which Bee runs as the farm manager of BK Farmyards, a Brooklyn based nonprofit that manages a network of small farms throughout the city—all of which fall under Bee’s purview.

For the uninitiated, CSA stands for Community Supported Agriculture; you pay upfront for a share in a farm, and assume all risks and 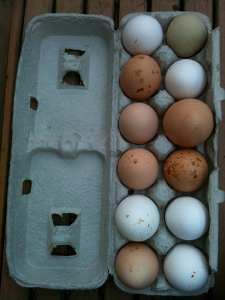 reap all benefits along with the farmer. The egg CSA started last March; members pay on a sliding scale between $90 and $135 for the season, and come to Imani Garden every week, and receive a dozen eggs a piece. On pick-up day, Bee presides over a cooler filled with eggs of varying sizes and colors: blue, green, beige, white. During the summer, there are 16 or so members; during the winter that number shrinks to five—unlike conventional egg operations, the coop is not lit artificially to induce more egg laying.

Almost all of the CSA’s members come from the immediate neighborhood.  “A lot of people from Greenpoint, Williamsburg and Manhattan wanted to join,” says Bee. But these out-of-towners were turned down. When Bee says local, she means really local.

BK Farmyards has been doing this sort of thing for a few years now, becoming established enough that the New York Restoration Project last year approached them about producing food at Imani Garden, then an under-used community space.  NYRP would provide the space; BK Farmyards would provide the labor and resources to turn that space into a tiny egg farm.

This is how Bee found herself making a springtime quest upstate in her battered, white 1990s-vintage Subaru Impreza, searching for chickens for sale.  The farms she encountered about an hour and a half drive from the city were so grim that Bee couldn’t bear to leave any of the chickens she found—she bought nearly all of the birds she met.  As a result, the CSA has the feel of an animal rescue shelter; some chickens still bear scars from the rough treatment at their former homes.

A sign reads, “Thanks for being kind to chickens,” and Bee takes this to heart.  “I feel like I have 50 pets here,” she said. 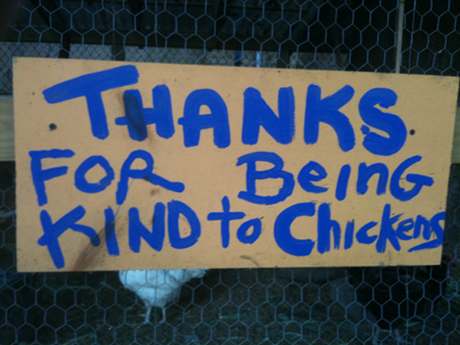 Before the egg CSA, Imani Garden’s hours were unpredictable.  Now, Bee is there most days, clearly relishing every opportunity to interact with the neighborhood.

A trip to fill five-gallon buckets with water—from a corner fire hydrant, which Bee opens with a special wrench—yields several conversations.  A young boy, at most 5, approaches with his caretaker, and asks to enter the garden.

The kid hesitates at the entrance, the border between pavement and dirt.  “I’ll leave the gate open for you,” says Bee, as she carries full buckets back into the garden.

In a little bit, the kid shouts: “I’m scared,” and requests that Bee hold his hand as he ventures into the garden.  She obliges, and the two of them make their way toward the chicken coop.  “I’m scared,” the boy says again, and repeats it like a mantra as he nears the chickens.  “I’m going to go pick one up for you,” Bee says.  “But I’m going to have to let go of your hand.” He agrees, and Bee grabs a white chicken, and kneels in front of the boy with it.

Once again announcing his fear, the boy hesitantly reaches out and pets the bird; the contact is made. He’s touched a wild chicken. He pets it again, then his attention is drawn to a large, empty plastic tub recessed into the ground.  “Throw it in the pool,” he suggests.

Bee Ayer grew up in Dexter, Michigan. In college, she began to pay attention to what she sees as the downside of industrial agriculture, “not just on the farmers and workers, but on consumers as well.” She began volunteering at local farms, and started a garden at a neighborhood school in Ypsilanti.

Bee read about BK Farmyards on a blog, and was immediately intrigued, so she contacted its founder, Stacey Murphy. “I told her I was really interested in what she was doing and would love to work with her,” she says. Less than a month later, Bee was hired as the Farm Manager.

Recently, Bee learned that her interest in farming may be hereditary. At a recent holiday gathering in Michigan, one of Bee’s aunts brought a family scrapbook. In it, there were letters and clippings from 1915 or so, showing Bee’s great-grandmother running a garden at a school in Ypsilanti—the exact same school where Bee started her garden, almost a century later.  Somewhere in between the two, the farm had disappeared; but Bee was able, unknowingly, to restart the work that her great-grandmother had begun. Both even raised chickens.

Of course, farming in the city didn’t have the same implications then.

“It wasn’t an ‘urban farm,’” Bee says, “And it wasn’t ‘guerilla gardening’—it was just what people did.”

Whatever it’s called, it has its benefits. This is how Bee describes a typical morning:  “I sit under a willow tree in a beautiful space, and drink coffee and watch the birds.”

Isaac Kestenbaum has worked as a farmer, a reporter and a commercial lobsterman. Originally from Maine, he now lives and works in Brooklyn.