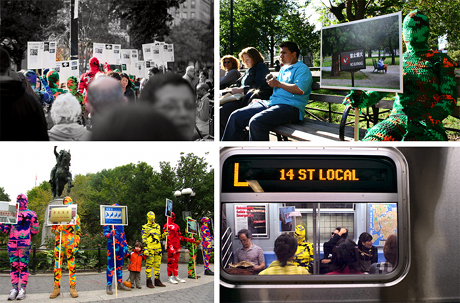 Imagine stepping onto the L train in your usual commuter’s haze. It’s Monday, your iPod’s juice is dwindling, and a moustached hipster just snagged the seat you’d been eyeing. Then the doors slide open and a strange man steps on the train. Not that kind of strange–he’s not singing or panhandling. He’s wearing a crocheted body suit. Every inch of his body is covered in yarn. There are no mouth, eye, or nose holes, but he doesn’t seem to mind. He’s just standing there, reading a magazine, as if it were any other day.

This has happened to many a morning commuter, and not as a group gag a la No Pants Day. It’s the work of Olek, a South Slope artist who’s turned a crafty gal’s hobby into a renegade art form. She crochets everything: people, windows, text messages, vegetables—truly everything.

Olek, who is currently a 2010-2011 Workspace artist-in-residence at the Lower Manhattan Cultural Council, first used crochet as an art form in 2003. She was taking a sculpture class, and her final project required her to sculpt something using a continuous strand. After toying with string and wire, she hit her eureka medium: yarn. “I crocheted a torso of a matador,” she remembers. “I brought it in to class and was so scared. I thought, ‘This is horrible.’ After, my professor said, ‘Now if you stop crocheting they’re going to cut your hands off.’ So I kept going.”

She has been covering her world in crochet ever since. And while her projects may seem like stunts created merely for shock value, they’re anything but. Each piece is conceived with the hope of making people see their everyday world in a bright new way. “I’m taking something very common that everybody is used to and transforming it,” she explains.

Her crochet-clad subway rider did just that for weary commuters. “I had the same performer go at the same time and place, every day for a week,” she said. “I wanted to create a situation where that person became part of the community, where people felt that the person exists with us.”

Her first subway performance happened on the L train in 2006, when Olek and her performer rode from 8th Avenue to Canarsie. Reactions varied wildly from one neighborhood to another. “The kids getting out of school were always crazy and would try talking to the performer. People in Williamsburg often pretended they didn’t see anything. Some people silently took pictures. New Yorkers are so used to strange things–the more people had been exposed to things, it seemed, the less they’d react.”

Olek thrives on turning the seemingly mundane into something worth noticing. Then she hides out to watch her onlookers react. “The art doesn’t exist without the audience,” she says. “You need them to participate in order for the piece to keep going and have energy.”

The Polish-born artist first witnessed the power of public recognition during a residency in Utica in 2005. “There was an abandoned, burned-down building next to my work space. It was so depressing to walk by every day, so I took a big ladder, climbed up the building, and covered the windows with crocheted panels,” she says.

“What made me realize this is something I want to do was the reaction from people,” Olek continues. “There was a bus stop nearby and when I went to check on the installation some people told me they’d been going to that bus stop for 10 or 15 years and it was the first time they’d realized something was different. They said it made them stop and smile. That simple reaction made me so happy because I changed something in these people’s lives—no matter how small.”

Olek often finds ways to sneak crochet bombs into our ho-hum routines. She created a piece for last year’s DUMBO Arts Festival based on a prompt from Yoko Ono’s book Grapefruit. “Painting to Shake Hands” consisted of a large canvas with holes in the middle so a performer (crochet-covered, of course) could put his hands through and see what happens on a busy street. She’s displayed the piece in Berlin, Harlem, DUMBO, and on the Brooklyn Bridge, where reactions varied from unfazed (hard New Yorkers) to freaked out (tourists). But one man’s reaction on 125th Street in Harlem stirred her like no other.

Olek started out in costume design, where she crafted outfits using everything from plastic six-pack holders to crocheted fabric. 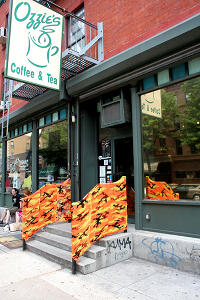 And while she spends most of her time on scuplture and installations these days, she still partners with dance companies like Rachel Cohen’s Williamsburg-based Racoco Productions. Their upcoming play If the Shoe Fits, which opens in March, will feature crocheted costumes and sets from Olek.

She also collaborates with Artichoke Dance Company. In 2008 they asked her to create landmarks outside the places they were performing in Park Slope and the results included a crocheted bench on 5th Avenue & 3rd Street, a yarn-covered stone in a community park between 3rd and 4th Streets, and crocheted handrails outside Ozzie’s. The installations complemented costumes Olek designed for the dancers: simple clothing peppered with crocheted patches.

This year, Olek’s public installations in New York City became even more elaborate. She recently crocheted two 12-foot-tall dogs out of balloons that were on display at LIU’s Brooklyn Campus; and she was commissioned by the Brooklyn Museum to host a one day community-based action called “Bring Your Clothes,” where she crocheted a new wearable sculpture out of visitors’ recycled clothes. But her show at Christopher Henry Gallery this past fall was the most impressive display of her work to date.

In the months leading up to her solo show, she left crochet-covered bicycles around the Lower East Side. Outside the gallery, she crocheted a VW bug, and inside she transformed the space into a studio apartment outfitted with furniture, text messages and people she’d crocheted in her signature rainbow colors. The show, called Knitting is for Pus****, embodies Olek’s creative philosophy: “Life and art are inseparable.” 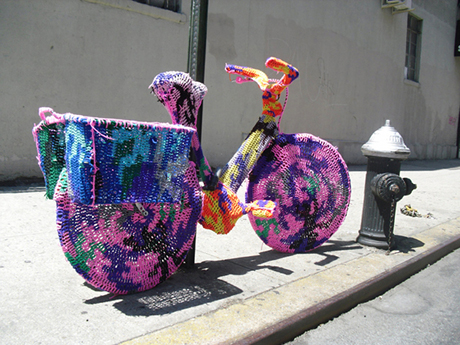 “I created a New York studio apartment with somebody living there, so I put performers in a suit to make them interact with the crocheted environment,” she says. “At the same time I had people from the audience put the suit on to be part of the show. That aspect is very important to me. I want to demolish the wall between observers, participants, and performers. You’re just an observer when you watch something through the window or door. But once you enter the room you’re a participant. And once you put the suit on you’re a performer. I hope to engage the audience so they actually become part of my work. Their response is the art, and my work is a mirror.”

Audiences will have another chance to become part of the show this month, when Knitting is for Pus**** reopens at the Christopher Henry gallery on January 5. Anyone who wants to can put on a crochet suit and become the art.

The only thing that rivals Olek’s obsession with crochet is her love for movies. When asked how long it takes to complete a project, she quantifies that time in films. It takes her 12 movies to crochet one bicycle. “Movies taught me how to make art,” she says. “For example, in the first scene, you see a guy running really fast. The movie keeps going and you never know why they focused on his running. Then at the end he saves somebody’s life because he can run really fast. They had to show in the first scene that he could run or you never would have believed the ending. That’s how you prepare your audience.”

“The same with art,” she continues. “You put the first bicycle, then you put the second and third, then they see a car, and other pieces. You prepare people for what you’re doing, so when there’s something huge coming up they get that you’re the person who did it. You have to build up to that point with smaller actions.” 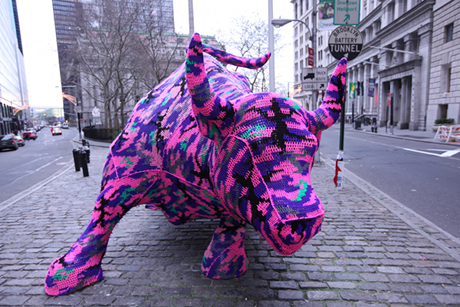 Olek just unleashed her latest “something huge”: a surprise Christmas gift to the people of New York City. In remembrance of those who don’t have a winter jacket, she donned the bull on Wall Street in a crocheted coat. The guerrilla project was completed at 6:30am on Christmas morning and was on display outside 26 Broadway for two full hours before a Bowling Green park keeper disrobed it.

Her work will take another unexpected spin on February 17, when her forthcoming show opens at NY Studio Gallery’s LZ space in collaboration with new media sculptor Devan Simunovich. Her signature bikes will be filmed as they’re crocheted and then slowly unraveled, with Simunovich’s 3D mapping projections intertwined throughout. “It’s a totally new thing that’s a little difficult to explain,” she says. “We’re starting with a bicycle because the show is in the Lower East Side where people in the neighborhood are already familiar with my bikes. I’m bringing this old, traditional method of crocheting, and Devan is bringing this new media technology. Put them together, and we’re creating something really spectacular that people have never seen before. That’s what always interests me more than anything.”

Maria Gagliano is a writer, book editor, and co-publisher of Slice magazine. She’s a Bensonhurst native living in Park Slope, where she’s teaching herself to sew, garden, pickle, preserve, and bake like her Sicilian family. She chronicles her (mis)adventures at pomatorevival.com.