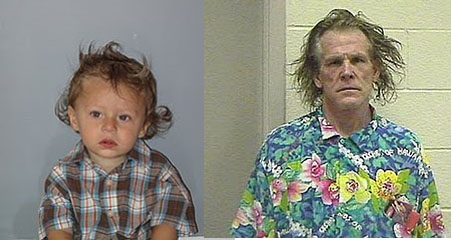 Last week we realized that our 15-month-old son Nate had started to look like a lot like Nick Nolte.

His blondish curly hair had reached his shoulders and when it was messy or he was cranky, there was no mistaking the resemblance.

It was time for a haircut and there was only one man to do it—Lucas Radcliffe.

We first learned about Lucas about a year ago when my husband and I, first-time parents of a three-month-old, joined Brooklynbabyhui, Williamsburg and Greenpoint’s parent listserv. At the time there was a heated discussion dominating the boards—dozens of messages multiplying daily under the subject line: “I’m really upset with Lucas the hairstylist!” Apparently Lucas, a neighborhood dad and former Soho-salon stylist, who was known as a local hero for his affordable house calls and overall friendliness—had been 30 minutes late to an appointment, making mom and son extremely upset.

The rant sparked a slew of emails. First Lucas’s wife apologized (“Lucas did not stand you up…He was running late…”) and offered a complimentary cut. Then other moms piped up in defense of Lucas (“No one was seriously hurt or put in danger, or even got a bad haircut…”) but the original poster still felt misunderstood and angry, and others argued this whole conversation was an inappropriate use of the Hui boards. In fact, the discussion got so intense that people started calling it “Hairgate.”

Then one sleep-deprived evening, kind of appalled at the never-ending nature of Hairgate, my husband pulled out the piano and, trying to make Nate smile, wrote a song. We sent it to Brooklynbabyhui:

“Hi everyone. With much respect for all, attached is the chorus of the opening tune, “Don’t Be Late Lucas,” from the never-to-be-written musical, I’m Really Upset With Lucas the Hair Stylist! Stage is a typical Brooklyn apartment scattered with toys and baby stuff. Boy, cute 2½-year-old (played by adult actor) is alone on the stage, staring out window. Super earnestly and sweetly, Boy sings…

And you only get one first time

And this is mine

The response, well you can probably imagine the response from this crowd. In short, “Hairgate” was reignited. There was a whole new flurry of emails—some hating us, some loving us, still under the same subject line “I’m really upset…” Ultimately the entire thread was removed from the board at the request of the disgruntled mom.

A year later, Nate was finally ready for his first cut so we made an appointment, with Lucas of course, for 9:30 on Wednesday morning.

On 9:30 Wednesday morning there was no Lucas. 9:30 turned into 10… Could this be happening? Was Lucas actually late? It would be too ironic. Around 10:30 I called Lucas’ wife who had set up the appointment. “I’m so sorry,” she confessed. “I put you down for 11.” Then Lucas called from his cell. “I’m so sorry,” he said letting out a short, infectious giggle. “Of all appointments for my wife to get wrong!! The universe is one big joker.” He giggled again and I couldn’t help but laugh too. We rescheduled for the next day. 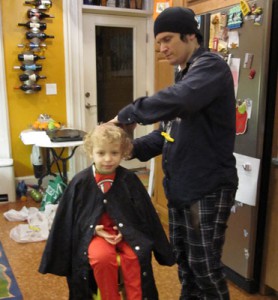 But the next day, right on time, in walked Lucas, a 40-something tattooed punk rocker who was warm, friendly, talented and super cool (pictured here cutting another child’s hair). He immediately tamed Nate’s tempertantrum with a few magic sprays of his water bottle (after first spraying mom and dad), and then set him up with a pile of Pirate Booty while he gave him an adorable cut. Nate didn’t even cry once. Lucas was awesome. As he swiftly twirled the scissors back into his black holster, Lucas told us that our song had garnered him a little business—some parents even played it when he arrived at their house. He was actually grateful for the whole “Hairgate” thing. And Nate’s cut was on him.

Lucas’s rates are $55+tip for a parent’s cut or $100+tip for color, with one free child’s cut included, and $25 for a child only. He also cuts children’s hair at Smoochie Baby in Williamsburg. You can book appointments via email (lucas.radcliffe@gmail.com) or phone, 347-277-8870.