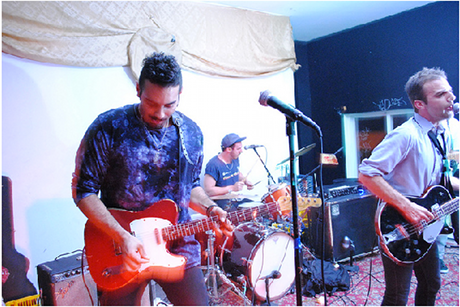 As we walked up Shea Stadium’s concrete staircase, my friend wondered aloud if they’d take credit cards. The door guy overheard and exploded with laughter. So, you know, it’s that kind of place. But in a good way.

There’s a sufficient selection of cold beer. Everyone smokes indoors. The bathroom doesn’t lock. It’s loud as shit. And I’m pretty sure the floor could eventually collapse. It’s DIY, definitely, but not, like, squatter DIY. I’d call it comfortably DIY.

Mix that with the decidedly un-hipster New York Mets theme, which owner Adam Reich tells me is definitely not ironic. He’s a native Brooklynite and says “it’s always been about the Mets.” Shea Stadium opened in 2009, around the time the original Shea was demolished.“I guess in some completely unrelated way, we’re preserving a NYC landmark, even if it’s only in the name,” he said. That’s all aside from the fact that Shea Stadium is an excellent, excellent place to see a show.

For one, this is not a “bringer” venue—people will be there. Shea Stadium, it seems, is a sort of cool kid Field of Dreams. Several strangers I chatted up hadn’t even heard of the bands performing, they just showed up because they like the venue and “try to come to pretty much any show here.”

You get the feeling that the room—capacity 275—is more than a handful of widely disparate bands and their friends, there out of begrudging obligation, creating a revolving door between sets. It’s more like one big, loud, smoky, writhing party where every act gets more intense, more boisterous, and more out of control. Eventually there will be crowd surfing, and you will consider doing it yourself until you remember you’re probably too old for that shit. Then suddenly it’s 1 am and you realize you’ve been smiling for about three hours straight.

Secondly, Shea Stadium records almost everything performed on its stage. To date, that’s exactly 774 sets. This week Reich is launching a website that will make recordings from around 170 of those bands available for free online. Visit liveatsheastadium.com in the coming days to listen.

Which brings me to my last point. There are no duds performing here. At least there weren’t last Friday. It may have helped that I checked out a show headlined by The So So Glos, friends/neighbors/apparent residents of Shea Stadium. They killed it. And the opening acts (all four of them) were equally as raucous. Ryann spit whiskey on my hair and writhed around on stage in a beaded tank and black panties. Your Youth knocked out a set of high energy power chords and cheesy doo-wop melodies. The Pharmacy rocked some 60s organs and dudesy dance riffs. And some other, last-minute act that used members of several of the bands didn’t disappoint either.