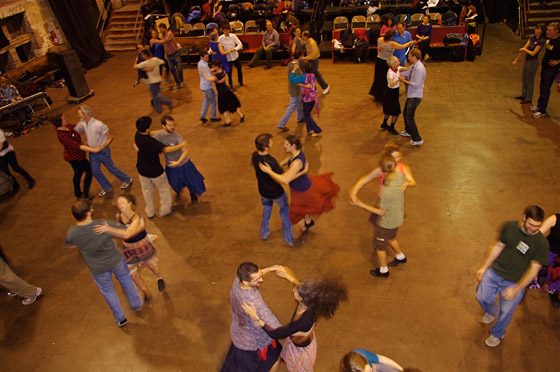 When making Friday night plans, the average New Yorker is more inclined to hit the nearest happy hour than head to the nearest dance hall. While dancing ordinarily requires expensive lessons and extensive searching for a second half to your duo, Lisa Bruno, founder of Brooklyn Contra, has solved that problem. “Don’t come with a partner, you don’t need a partner,” says Bruno. “Contra is perfect for people who are interested in dancing but apprehensive about choreography, since someone is telling you what to do.”

It’s also perfect if you want to hit the dance floor without having to wait in line at a club, navigate a skeezy pick-up scene, or pay $15 for a drink.

Contra, a tradition with roots in New England, is a form of dance that fuses styles from the United States–like square dance, and Western Europe–like French quadrille, into one multicultural social dance. From banjo to Irish fiddle, a variety of folk instruments contribute to the jigs played by a live contra band, accompanied by a caller delivering instructions for each set of moves as the dance progresses.

Bruno, a preschool teacher by day, began dancing in the thriving contra community of Asheville, North Carolina, while co-organizer Allison Shapp, now a linguistics grad student and member of Contra Dance NY house band The Contrapolitans, got an early start contra dancing in high school on Long Island. With a common interest in dancing closer to home, the two joined forces and began raising money for the first Brooklyn Contra dance in early December 2010. “Younger people live in Brooklyn, and there’s more of a community feel than Manhattan,” says Bruno. “Everyone knows what’s going on in their neighborhood and wants to become part of the community they live in.”

While there has been a resurgence of younger dancers in past years, the organizers say contra dancers represent a vast range of ages with one common quality—openness. “You’ll have all new friends after getting involved,” says Shapp. “About half the dancers are experienced, and they’ll seek out the new dancers. Everyone’s really helpful toward the new people, since we’ve all been there at one point. Then it becomes addictive.” 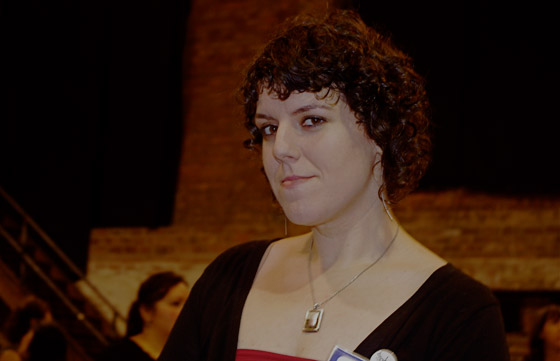 Every fourth Friday of the month, Brooklyn Contra hosts a dance to feed this addiction, followed by a trip to a local bar or diner. “It’s great exercise, so you can validate having a grilled cheese later that night,” jokes Bruno. With tickets at $14 a pop and $12 for students, she points out that it costs about the same as seeing a movie, “but it’s longer, healthier, and we have live music.”

The organizers not only hope to become a staple of the borough’s dance scene, with plans for regular venue in the future; they also plan to register Brooklyn Contra as a 501(c)(3) non -profit organization. “We plan to grow a community of people who regularly come. We want to have the hottest callers and the hottest bands,” says Shapp. The next dance will be held on January 28 at the Brooklyn Lyceum in Park Slope and will start with a thirty-minute beginners’ segment prior to the main event. Tunes will be provided by The Collar, a contra band made up of local musicians, The Contrapolitans and Carl Nevine, a Brooklyn native, will serve as the official caller. “Not only is this a new skill with lessons built in, but live music is now a part of our everyday life,” says Shapp. “And really, really great people,” adds Bruno.

Brooklyn resident Amy Sisti-Baum would be inclined to agree with Bruno; she met her husband Gary at a contra dance in Manhattan. “He was dressed like a pirate with a stuffed parrot on his shoulder,” recalls Sisti-Baum. “I said to myself, That guy looks really cute and geeky and fun.” Though the two didn’t begin dating for several years, Gary clearly made a lasting impression. “It’s a great way to meet people and make a connection. Contra encourages contact, and it’s also gender neutral. The women ask the men to dance, and the men ask the women to dance,” she explains. The same night she met Gary, Sisti-Baum also met five other dancers she developed lasting friendships with—friendships fostered by the receptive culture of contra. “In this context, approaching someone is not so forward,” she says. “People who go to contra, they tend to be open to new things. They have an adventurous spirit.”

Leave a Reply to cybercita