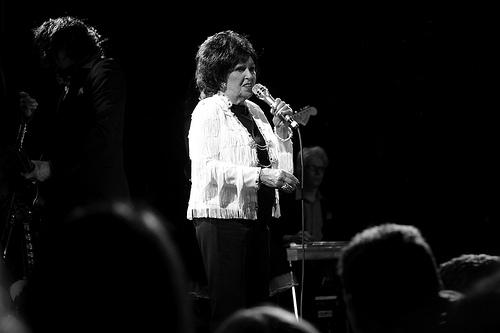 Last October, in the

Last October, in the virtuous 7:40 a.m. slanting sun, I departed for the first day at a straight-laced job unlike any I’d had before; one I intend to keep as long as they will have me.

In the first minute of my commute to my new job, I walked behind two girlfriends who were either roommates or who’d had a sleepover the night before. They were probably in their mid-twenties, dressed the way I dressed in high school and early college, only now it’s worn as a “retro” look. They both had long natural hair parted in the middle, flannels, leggings, and booties.

Seeing them elicited a little pang in me, dressed in office-appropriate wool skirt and heels. I won’t wear grunge again (although I have happily re-embraced leggings in context of a tunic or shorter dress), and I lazily envisioned the girls’ lives as simpler and easier. I’m re-acclimating to my old home in a different era of grownup life, and they reminded me of the single me before I moved, working in offices with my friends.

As it’s now the deepest, darkest hibernation point of winter, I force myself to go out a few times a week for the social/cultural/ mood-lifting benefits. Compared to some, I’m quite active, yet lately I also excel at being an old fart.

Exhibit A: Rock Shows I wish most rock shows I attend would end after about three songs. Yo La Tengo is one exception. They’re so great and have so many different sounds that I would be happy to listen to four or even six songs by them live, but when I caught one of their excellent Hanukkah shows in December, I did not mind in the slightest missing opening band Misson of Burma.

I never wish the rock lasted longer, except maybe if I were front row to see the young Rolling Stones, or Elvis or Johnny Cash. So outside of magical scenarios, if it’s a bunch of skinny dudes who don’t even address the audience, I’d just as soon be somewhere else (probably eating).

Exhibit B: New Year’s Eve Every person I spoke to about New Year’s Eve this year bragged about how much they didn’t care about New Year’s Eve. This is either a red-hot trend–a reclamation of the year’s final night from the pressure of having the Best Glittery Party Time Ever–or it means the people I talk to are old fucks. The husband and I took it to a new level this year, for the first time opting to ring in the year with no one else but our dogs. Even my father-in-law called us old when he heard the plan.

This was also the first year that I had a difficult time staying awake for midnight (my bedtime on work nights). You have to picture the setting: the house in the Berkshires where my father-in-law and his wife live during the summer months. We’ve dubbed it Slumber Acres, because it’s optimized for unplanned sleeping. It has plenty of wide, comfy couch space to accommodate all humans and dogs, and said couches are situated around a wood-burning stove, with views out to nature and a large TV. (The older I get, the more instantly I fall asleep when the trifecta of warmth, TV, and comfortable couch are in effect.)

It was like that the whole trip, though. In the passenger seat on the drives up and back, I dozed through the audio book of the Keith Richards autobiography, though not for any want of sex/drugs/rock/roll plot lines. Car heater + voice of Johnny Depp reading Keith Richards storytime = sleepytime.  If I’m like this now, what will I be like in actual old age? Hopefully Conan O’Brien will continue to accommodate me by getting ever-earlier evening programs.

Exhibit C: Williamsburg I have no use for Williamsburg, and feel old when I’m there. Before this past Friday, I had been on Bedford only once since we moved back, with out-of-town guests, so my reasons for previous dislike were no longer as fresh, and maybe I wasn’t being entirely fair before.

To be honest, there may be one or two uses for the neighborhood. There are some restaurants I’ll try when it’s no longer Williamsburg’s season of frigid wind daggers, which wage their constant assault off of the water. There’s also the occasional appealing live event (always during wind dagger season), like this weekend when I went to see Wanda Jackson play at Music Hall of Williamsburg with the Third Man House Band.

At age 73, Wanda put on a great hour-long show that I was wishing to be over by the eighth or so song (admiring Jack White in his well-tailored suit gave me extra stamina for this one). My reverie was interrupted as Wanda announced for her next song, saying she wanted to talk about something important: the Lord.

The vibe in the crowd shifted a bit. I couldn’t have been the only one holding my breath anticipating the crowd’s reaction.

A man behind me remarked, “Brave of her to talk about Jesus in New York.”

Wanda gave only a few sentences of introduction, as some in the crowd murmured, and someone else behind me said “Be respectful” in response, before the band launched into a Wurlitzered-out ‘70s take on an old gospel song from her new album.

It may be that no one has ever dared say something so earnest in Williamsburg before. You know what, though? If this city is so tolerant, why can’t an elderly lady from Oklahoma profess her love of Jesus without murmurs and heckles in the crowd? Some drunk yelled “JESUS CHRIIIIST” later between songs, a la “FREEBIIIRD.” Jesus Christ, Williamsburg. (It wasn’t a locals-only show, but I can’t help pinning this one on the locals.) To paraphrase the Wanda song, hot dog, that made me mad. I remembered why I once named that place Williamsjerk.

To circle back to my first day on the new job, that evening was not so adult and dignified as the morning. I entered the Casserole Crazy competition with my pal Kristina, who was visiting from L.A.. After gorging on carbs and putting away numerous free cans of Brooklyn Lager, Kristina, my pink Pyrex dish and I were stuffed into the photo booth at Union Pool, with much fun foolishness, her now a homeowner and me now with a “real” job, but not so unlike ten years ago.

Colleen Kane is a writer and hosts the reading series Show and Tell, which happens one special Monday each month at Union Hall. The next show is on Feb. 14, and the theme is…wait for it…”Love.”