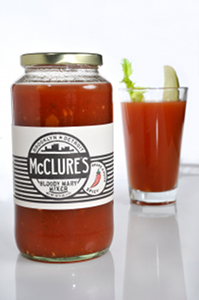 In the five years since McClure’s Pickles began making their delicious garlic and spicy dills, Joe and Bob McClure have watched their artisan pickles become a best-seller in markets across the country. But until recently, the brothers were overlooking a key ingredient to their success: their brine.

They began branching out with their Bloody Mary Mix, which, for anyone who has tasted Mr. & Mrs. T’s or Zing Zangs, is a mind-altering experience. For starters, there is no horseradish or worcestershire in it. Not that you miss it. The mix is based upon the brine from their Spicy Pickles, which they have always recommended as a Bloody Mary base, a chili base or even a marinade for shrimp or tofu gumbo. To make it easier on folks, they concocted a ready made recipe with tomato paste, cucumber juice, garlic, dill, black pepper and a mix of habanero and cayenne peppers. One jar is like a supercharged, fiery hot V-8. Try it with beer, and you have an original twist on a Michelada. Add it to vodka, and the effect is one of the spiciest, freshest-tasting, and yes, briniest Bloodies you’ll ever taste. (It’s also the vehicle for two frightening, funny commercials. One features Bob McClure himself, an actor on The Burg and writer and co-creator of All’s Faire.)

Then came the Pickle Back craze. Four years ago, a woman walked into a bar–our own Bushwick Country Club–where McClure’s was temporarily storing some inventory. She ordered a pickle juice chaser for her shot of whiskey, a well-known combo in her native Texas for cutting the after burn of rye, and they gave her some juice from a jar of McClure’s spicy pickles. The encounter sparked a local cocktail craze at schmancy spots like The Breslin and slew of trend pieces.And then a famous maker of whiskey approached McClure’s to see if they could purchase their pickle juice on its own. So McClure’s began bottling the brine last summer–and it just won a Good Food Award in January, presented by Alice Waters.

You can try both on Saturday, Feb. 5, where Bob McClure himself will be attending two McClure’s Bloody Mary tastings. The first takes place at Brooklyn Kitchen from 2-4  (RSVP here), and at the Greene Grape from 5-7pm with Tito’s Handmade Vodka (RSVP here). Also on hand will be McClure’s Spicy Pickle Brine for shots at home. The following day is Superbowl Sunday, after all,a perfect excuse for daytime drinking if we’ve ever heard one.