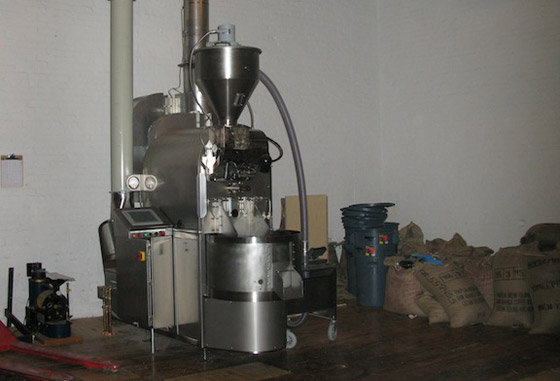 Even without the slushy complications of last week’s snowstorm, finding Brooklyn Roasting Company on Jay Street down in Dumbo is not an easy assignment. Aside from a little black mailbox on the side of the old Arbuckle Building, the whereabouts of Brooklyn’s newest local coffee-roasting company are elusive. An online search yields equally ambiguous results, which is how, for now, founder Jim Munson enjoys it.

“We’re happy to fly under the radar,” says Munson, who left his post as vice president of Dallis Bros. Coffee, a New York caffeine institution, to start BRC, which incorporated a little over a year ago. “We’re not spending a lot of money on marketing. There aren’t placards on our windows.” Prior to working at Dallis, Munson was one of the individuals who helped get Brooklyn Brewery up and running, and gleaned heavily from its business blueprint when it came to getting BRC off the ground. Having helped usher in the era of the beer snob, Munson has now turned his attention toward another archetype–the brew snob.

“The coffee scene is changing in New York the same way it did in Seattle and Portland,” Munson says. “There are parallels between the coffee world and the beer world. That same thing happened in the beer world 15 years ago. Now the beer business in New York has completely changed. The landscape has changed, and the other great American brewed beverage, coffee, is going to follow in its footsteps.” And in an effort to ensure their ascent is both conscientious and sustainable, BRC roasts up to a ton of fair trade, organic, Rainforest-Alliance certified coffee beans a week on a Loring Kestrel coffee roaster Munson and his team installed themselves six weeks ago when they moved their operations to Jay Street instead of contracting out their roasting to Eldorado Coffee in Queens, as they had been doing.

Silver, shiny and costing six figures, the Loring looks like a contraption that was transported to Brooklyn from the future. It is in actuality a computerized, 80-percent fuel efficient roaster revered for the heat re-circulating air system it uses to roast its beans. It’s the first of its kind in New York, and has been widely revered in the coffee roasting world as a marvel of green engineering. Or simply, as Munson puts it, the Loring “is not the average coffee roaster.” After sipping a double-roasted Sumatra full of rich chocolate and berry flavors, we’re apt to agree. 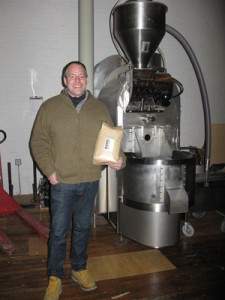 Turns out we’re not alone in our assessment. BRC beans percolate in a dozen or so of Brooklyn’s best cafes including Colson Patisserie, Swallow Café and Brooklyn Victory Garden, as well at restaurants such as Egg in Williamsburg and in the shared coffee pots at Greenpoint CoWorking. It’s also the exclusive brand brewed at Columbia University. For home use, bags of BRC can be found at Urban Rustic, Brooklyn Victory Garden and Colson Patisserie.

For cafe owners like Henry Glucroft of Little Skips in Bushwick, which serves both the double-roasted Sumatra and a custom roast BRC developed especially for their French presses, the high quality of the beans and Munson’s approach to coffee made the choice to begin brewing BRC a no brainer.

“We’re a really young company that’s ambitious, and we felt the same in Brooklyn Roasting,” Glucrost explained during a phone interview. “Jim’s really good about building relationships. He’s somebody who’s got that entrepreneurial ambition and open-mindedness that’s rare especially in the coffee business.” The company currently stocks 10 types of third-party-certified green coffees from around the world, which are delivered on cargo bikes able to hold up to 400 lbs. of coffee at a time and in biodiesel vans. Their sourcing policies, bikes and biodiesel, combined with the efficiency of the Loring roaster, may just make BRC the greenest coffee company in the city.

“The time is right for New York City to spread its wings and lay claim to its own best-quality coffee legacy,” Munson says. “We don’t need people from Portland or Seattle to tell us how to roast our coffee. We can do it well ourselves.”