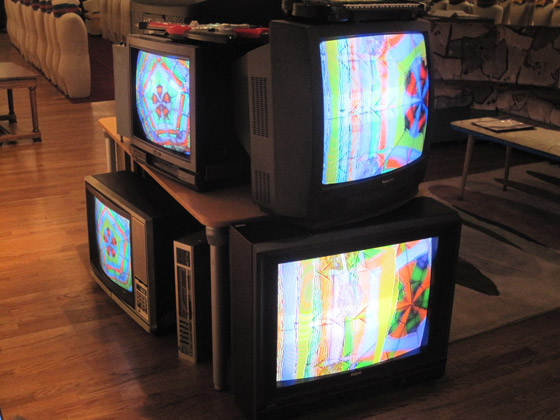 An exhibit at the Micro Museum

You’ve seen Van Gogh’s Starry Night at MoMA at least six times. The Museum of Sex retains little to no shock value at this point. And as a regular at the Brooklyn Museum’s Target First Saturdays, the permanent collection is permanently etched in your memory. Looking for some fresh inspiration? Need a new spot to take visiting relatives? More than a few cultural institutions “on the cutting edge,” as Kathleen Laziza, one of the founding directors of Micro Museum, puts it, call Brooklyn home. From African Diasporan paintings to the original subway token turnstiles, here are lesser-known museums worth exploring.

Micro Museum
“We’ve got talking furniture and clowns that laugh,” explains Kathleen Laziza. “It’s a place for kids of all ages.” Laziza founded Micro Museum with her husband William in 1986 as a nonprofit center for eclectic interactive art. In the midst of celebrating its 25-year anniversary, the museum is exhibiting pieces created solely by the Lazizas for the first time. “We’re taking a break from open calls to reformulate where we go,” says Kathleen. Their works range from a solar-powered kinetic sculpture displayed in the second floor window to a pair of televisions, Aunt Mame and Superman, seated in wheelchairs bearing the moniker “Invalid TVs.” These creations thrive on materials that are now useless in their original roles. In the early years of the Micro Museum the duo sold soup to bring visitors through the door. “It was a great unifier,” Kathleen says. Now they run a museum that functions as a stepping stone for emerging talent and performs a tricky balancing act between a space for serious art and a stomping ground for community members young and old.
Micro Museum, 123 Smith Street, Boerum Hill, 718-797-3116, walk-in hours noon to 7pm on Saturdays, $2; many other times and guided tours available with advance notice, including a $10 tourist destination package.


MoCADA
Twelve years ago, Laurie Cumbo began a project for her graduate school thesis dealing with modern Black African art. The result is a 1,700-square-foot center on Hanson Place dedicated to this very culture—the Museum of Contemporary African Diasporan Arts, where Cumbo now serves as executive director. In partnership with the Caribbean Cultural Center in Manhattan, MoCADA fills a needed space for African Diasporan art in Brooklyn, says special events coordinator Shante’ Cozier. “Brooklyn has the largest African Diasporan population in the state,” she explains. “There should be a space dedicated to the art and culture of this population.” The two institutions are currently collaborating on “Re-Imagining Haiti,” an exhibition co-curated by Cozier, which spotlights artists examining methods of reconstruction on the one-year anniversary of the earthquake in Haiti. And, the museum plans to establish a Brooklyn-centric permanent collection. “In our future, we’d like to become a pivotal center people reference for African Diasporan culture with a live and active permanent collection from famous Brooklyn artists,” says Cozier.
MoCADA, 80 Hanson Place, Fort Greene, 718-230-0492, Wednesday to Sunday, 11am to 6pm, Thursdays 11am to 8pm, $5 adults, $4 students. 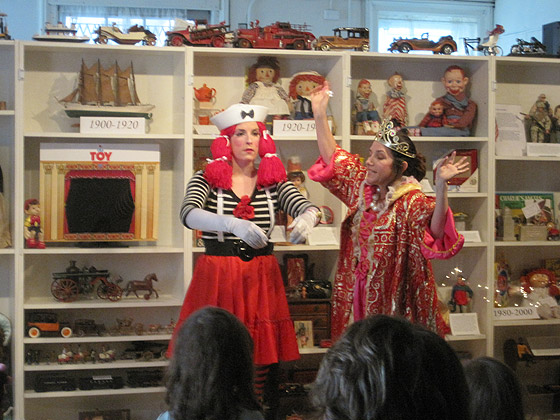 One of Queen Marlene’s shows at the Toy Museum

The Toy Museum of New York
Entering the Toy Museum of New York does indeed feel like walking into a doll house–the walls are lined with teddy bears and miniature porcelain figurines. Originally called The Doll and Toy Museum of New York City, in 1999 the establishment was renamed in honor of its tenth anniversary and because it is the only chartered toy museum in New York State. “Queen” Marlene Hochman, founder and director, puts on regular weekday and the occasional weekend shows dressed as a live version of Raggedy Ann. Her mischievous alter ego loves to share factoids like the history of the Frisbee. “Toys are always a reflection of society,” says Hochman. The current exhibit showcases toys and dolls from India to South Africa. “We’re beginning to gear our focus toward children’s theater in Brooklyn for ages two and up,” says Hochman. The museum also travels to the Brooklyn Heights and Bay Ridge branches of the Brooklyn Public Library on a weekly basis, to display select exhibits and programs for free.
The Toy Museum of New York, 157 Montague Street, Second Floor, Brooklyn Heights, Wednesday to Friday, 11am to 5pm, $10 adults, $5 children.

New York Transit Museum
No Brooklyn museum list would be complete without a mention of the New York Transit Museum. Housed in an abandoned subway station–and easy to mistake for a real subway entrance, as some have found out the hard way–the museum reveals a complete history of New York’s underground rail system. The vintage subway cars and buses are well worth the trip to Schermerhorn Street, but the two current exhibits “Inspiring Spaces: 25 Years of MTA Arts for Transit”  and “The Once and Future Pennsylvania Station” are particularly rewarding for New York history buffs. “Inspiring Spaces” offers a glimpse into past projects commissioned by the MTA since the inception of its public art program in 1985. And the opportunity to see what the much beloved, and mourned, Beaux Arts building that was Penn Station until 1964 looked like, will make you shake your fist at the clunky colossus of Madison Square Garden next time you’re in Midtown.
New York Transit Museum, enter the “subway stop” at the corner of Boerum Place and Schermerhorn Street, at the nexus of Cobble Hill, Brooklyn Heights and Downtown Brooklyn, Tuesday to Friday 10am to 4pm, Saturday and Sunday noon to 5pm, adults $6, children $4