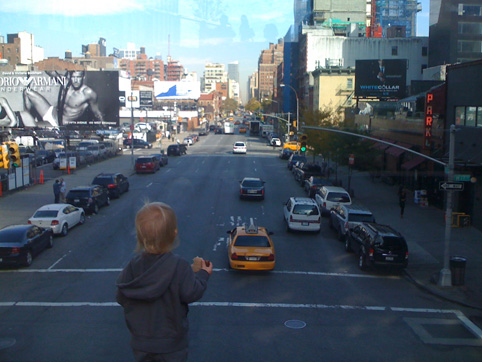 A mom admits she loves her son “just a little bit more” than her daughter, then goes on to say “There are moments – in my least sane and darkest thoughts – when I think it wouldn’t be so bad if I lost my daughter, as long as I never had to lose my son.” But after a ton of moms went after her jugular for being such a cruel psycho for saying such a thing, the post has since been neutralized with the following phrase: “There are moments – in my Sophie’s Choice type musings – when I wonder which child it would really be worse to lose…if I were ever forced to choose.” Hmm, maybe that will help soften the blow when her toddler reads this as a parent-hating 13-year-old? [Babble]

Erin Behan of A Brooklyn Life is also blogging for Babble. Her latest post, Top 10 Reasons Reasons to Have a Baby in New York City includes a surprising factoid. It’s perfectly legal for women to go topless in this state (unlike the rest of the union). So next time you get the stink eye for breastfeeding in public, you can say “Hey, be thankful I didn’t take off my shirt to breastfeed, cause I can totally do that too!”

W Magazine offers up a few of its favorites from last weekend’s Brooklyn Baby Expo, hosted by A Child Grows in Brooklyn. The gear looks great–wish I’d been in town for it.