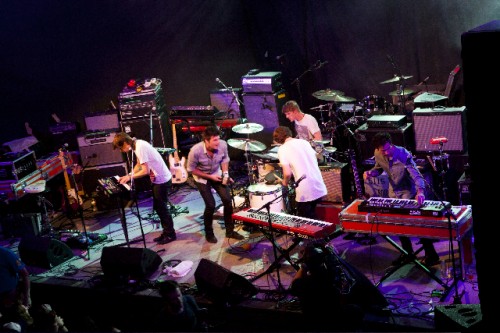 Foster the People at SXSW

So you couldn’t get out of Brooklyn for SXSW last month? It’s ok, the best bands are coming to you. Here are eight local shows that will recreate a festival’s worth of music and fun.

Tuesday, April 5: Weekend at Music Hall of Williamsburg
Hear: “End Times”
Open your SXBK shows with Weekend, a band that started many people’s SXSW. They played the Pitchfork Interactive showcase on March 15 alongside Surfer Blood and PS I Love You. Weekend (not to be confused with The Weeknd) is a lo-fi shoegaze trio from San Francisco. Their first full-length album, Sports, was well-received by taste-makers ranging from Tinymixtapes to NPR. They’ll be opening for Wire, the seminal British art punk band. The show is 18+, and tickets are $20.

Wednesday, April 6: Golden Ghost at Bruar Falls
Hear “Plain Sight”
Golden Ghost is Laura Goetz, but her live show includes Brandon Massei (Viking Moses) on bass and vocals. Goetz, a singer-guitarist-composer, bridges the gap between strange and accessible with her lovely voice. Golden Ghost is playing alongside Joanne Shornikow of Shivers, Tiger Saw, and David Garland. The show is $6 and 21+.

Thursday, April 7: Porcelain Raft at Glasslands Gallery
Hear: “Tip of Your Tongue”
Porcelain Raft’s recorded tracks are a one-man-with-a-laptop project. Unlike many bedroom projects, Porcelain Raft’s airy, aural pop translated well to stage with an electric guitar and sampler. Praised by Altered Zones, Weekly Tape Deck, and more before SXSW, Porcelain Raft has garnered even more attention in the weeks since the festival. The successful transfer of a one-man project to stage is worth the $10 ticket, with the added benefit of openers Oupa, Young Magic, and Computer Magic. All Glasslands events are 21+.

Friday, April 8: Beach Fossils at Music Hall of Williamsburg
Hear: “Youth”
Brooklyn’s own Beach Fossils returned to SXSW this year armed with their brand new album. After impressing audiences last year with their EP, the jangly lo-fi band gained a footing and a fan base that was waiting for them on their return to Austin. Playing to large and engaged crowds across the country, their homecoming show should be electric. Craft Spells and Crinkles open. Tickets are $12.

Saturday, April 9: Foster the People at Knitting Factory Brooklyn
Hear: “Pumped Up Kicks”
After releasing their single, “Pumped Up Kicks,” in early 2010, Foster the People played a few shows at SXSW 2010. The single was a runaway success, and the band exploded through the rest of the year. The LA dance-pop band has since played sold-out shows in the US and Australia, and at SXSW 2011, they opened for Raphael Sadiiq and Duran Duran. The Knitting Factory show is sold out, but they’re returning to Brooklyn on June 20 at Music Hall of Williamsburg; tickets go on sale April 8. See them now so you can say, “I saw them when…”

Sunday, April 10: Toro y Moi, BRAIDS, and Adventure at Music Hall of Williamsburg
Hear: “Leave Everywhere” by Toro y Moi
Hear: “Liver and Tan” by BRAIDS
Hear: “Feels Like Heaven” by Adventure
If there’s one Brooklyn show to sum up SXSW this spring, this is it–and unfortunately it’s sold out. Toro y Moi impressed crowds with music from their new album, BRAIDS played their dynamic art-pop in nearly every venue, and Adventure had crowds dancing to his 16-bit pop music. All three have renewed momentum after the festival and catch them all while they’re still riding the SXwave.

Thursday, April 14 Grimes at The Bell House
Hear: “Werglid”
Grimes is 18-year-old electronic artist Claire Boucher. Sometimes grouped with “witch house” artists, the young Canadian has carved out a niche for herself. Referencing genres from R&B to goth and industrial, Grimes has no musical training which seems to free her execution rather than hindering it. Grimes seems to be following a Zola Jesus trajectory, so this is the moment to keep an eye on her. She will be opening for Handsome Furs on a $15 ticket.

Saturday, April 16 Sharon Van Etten and Megafaun at Music Hall of Williamsburg
Hear: “Love More” by Sharon Van Etten
Hear: “Volunteers” by Megafaun
Sharon Van Etten made a name for herself as a melancholy singer/songwriter following the release of her first album, but following her second release, she began to tour as a full band. Her formerly sparse live show has filled out substantially, while keeping Van Etten center stage. Megafaun, a Durham, NC band associated with Bon Iver and GAYNGS, would probably have been this show’s headliner a year ago, drawing on the band’s stable reputation and fan base. Their Appalachian rock takes more risks than most Americana and folk bands but remains eminently listenable. She Keeps Bees opens. This show is 18+ with a $15 ticket.

Brigid Hogan is a student who loves music, magazines (online or paper), and brunch. She is a nap enthusiast, pop culture addict, and is continually searching for the ultimate bagel.