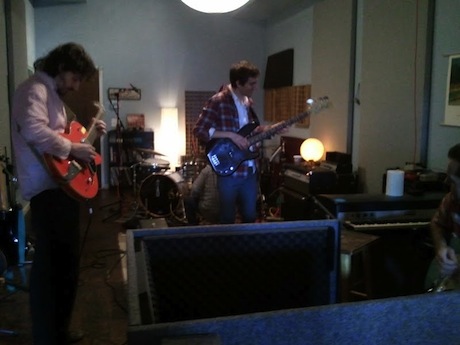 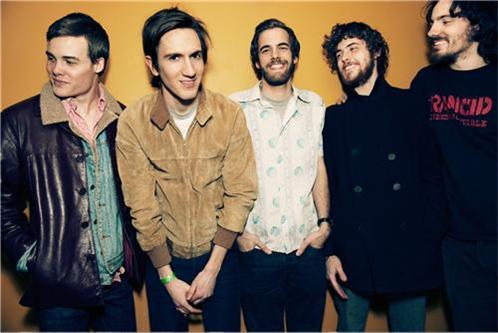 Each month, Brooklyn Based unveils an exclusive, new song by a Brooklyn band, recorded at Nadim Issa’s state-of-the-art recording studio in Gowanus, Let ‘Em In Music. This month’s mp3, “Oblivion,” is a Mastodon cover by Motel Motel.

Newcomers beware: The track that heartfelt alt-country group Motel Motel recorded during their Let ‘Em In studio session is far from a proper introduction to their sound.

But this post’s exclusive (not to mention epic) cover of Mastodon’s “Oblivion” does do well to show the personalities behind the band–in particular, the pure, unadulterated fun the Brooklyn-based five-piece has playing music together.

Lead vocalist Eric Engel, who also switches between guitar and bass duties, explains: “We picked six songs to possibly cover, but at the end of the day, Mastodon was the best blend of novelty, enjoyment and sounding somewhat good.”

“What happens is I have a lot of ideas, and other people actualize it,” says Engel of their general songwriting approach. “We all have different music backgrounds and tastes, so hopefully it makes for an interesting combination.”

Band members collectively list influences all over the map: Jim O’Rourke, Bob Dylan, Willie Nelson, the Silver Jews, Brian Eno, and the Dirty Projectors, just to name a few. Says Gundel: “It’s therefore hard to pin down a ‘usual’ sound when one song can lean towards Willie Nelson and the next towards Mastodon.”

Since the release of their debut full-length New Denver in 2008, the band has racked up considerable acclaim. That year, they earned an honorable mention in L Magazine’s 8 NYC Bands You Need to Hear as well as a slot in New York Press’s 20 Best Bands Currently Playing. Then, in June 2009, the group was selected to record a four-song Daytrotter session (and are slated to release a second shortly, following a newly-recorded session last week).

It was also in summer 2009 that Motel Motel played some of their most notable performances to date–in far away Egypt. They did so through the Rhythm Road: American Music Abroad program, a government initiative aiming to seed engagement with foreign audiences through live performances, workshops and jam sessions.

The invitation came from Laila Abbassy, an American Center worker in Alexandria, who reached out in hopes of expanding that year’s lineup past its usual classical and jazz focus. Compiled video footage from the trip showcases the varied experiences the spotlighted young American rock band had:

The eye-opening experience likely has a bit to do with why the boys of Motel Motel don’t feel too affected or constrained by the Brooklyn music scene. “We are a Brooklyn band because that’s where we live and practice,” says Engel. “We have never really felt too incorporated into a scene.

“I suppose we are exposed to the cattiness and competition that goes on. Everyone has their band, trying to make it somehow,” he continues. “Some people are very compassionate in that goal, but not all.”

Currently Motel Motel is rounding the last stretch of a several-week tour in support of their well-received August 2010 release The Big Island. But after that, the band’s future is uncertain.

Explains Engel, “I am getting married. Mickey is going to Yale for acting. Timo is looking at schools in biology.” There’s been talk of a hiatus–potentially permanent–as band members move on to pursue these personal interests.

Fans can rest assured, though, that if the band has met its end, it won’t be due to internal conflict. The one and only issue they bicker about on the road, admits Engel, is whether cigarette-smoking is allowed in the van’s back seat.

Besides that, their five years together–from New Denver to Egypt and back–have made for an easy-going dynamic despite their diverging influences, which you can hear in their cover of “Oblivion.”