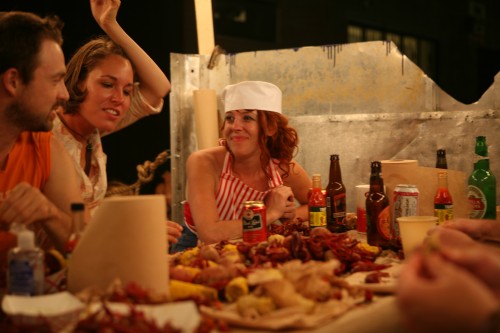 Alfresco food truck dining (Jen in candy stripes in back)

“Food doesn’t have to be art, but it definitely can be,” says Jennifer Catron, one half of Jen and Outlaw, a duo best known for their food truck, which premiered last summer in Bushwick. Serving mainly fried catfish po’ boys and boiled crawfish, she and Paul Outlaw managed to gain serious recognition from their brief and unpublicized run. In fact, Jen ’n’ Outlaw’s Fish Fry Truck and Crawfish Boil, named by L Magazine as one of Brooklyn’s Best Food Trucks, only operated for five weekends last summer.

I sat down with the couple at Boneshakers Café in Greenpoint, where they shared a McDonald’s breakfast burrito. Outlaw was sporting a pair of gold-rimmed Elvis glasses, a bald eagle American flag hat and a long beard that’s more Galifianakis than ZZ Top. Catron has a Jenny Lewis-meets-Neko Case Southern rocker appeal, with red ringlets in a state of Sunday morning dishevelment. The two speak with a somewhat thunderous intonation and twang—he is from a small town in Alabama, she from rural Illinois–and seem to be on the same plane, constantly rounding out each other’s thoughts and finishing each other’s sentences. It’s as if they’ve been cast to co-host a Southern-themed talk show. 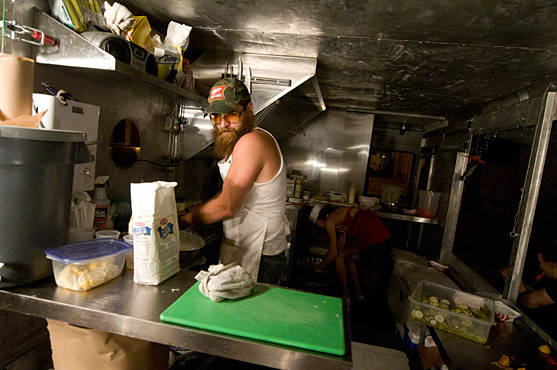 The two began dating at the Cranbrook Academy of Art in Michigan, where they also whetted their appetites for performance art. ”We look at performance art as we’re never playing a completely opposite character from ourselves,” Outlaw says. “We’re just wearing a different hat. Everyone does that. Every time you leave your house you become a different person. We just emphasize that change.”

Outlaw is interested in the role that entrepreneurship plays in art. While in college he opened up a bodega in his art studio and sold cigarettes and booze, to “meet the demands of the community.”

Upon moving to Brooklyn, the two noticed a similar need for decent Southern-style seafood. Catron fondly remembers the feeling of togetherness that revolved around the fish fries in her hometown.

“Every Sunday at church would be a fish fry. It would just be something special that we’d all look forward to. All sorts of rednecks would come out of the woods.”

The two proceeded to buy a truck off Craigslist which they promptly gutted, and turned into an art project all its own. “The back end is hydraulically mounted so that it opens up and folds out, kind of like a pop-up book, almost doubling in length. Inside there’s a picnic table, benches and an umbrella. It’s basically a portable restaurant.”

When the truck remodel was completed, the two began frying fish on weekends, usually near the Morgan Avenue L stop. They treated the project more an art show than a food truck, sans wealthy backers or advertising. For the entire summer, following @Jenandoutlaws on Twitter was the only way to track them down.

“It’s kind of like a treasure hunt, people just come upon us and it really amps up the excitement.”

Catron and Outlaw also play host with a special zeal. I asked if they dial up the Southern-ness for the sake of the experience. “We do, for sure. But when you’re in that truck and you’re frying fish with country music in the background, it’s just there, you can’t help but get in that spirit.”

Perhaps most impressive about their five-week run is the notoriety it brought. By summer’s end, the truck had been written about by almost every major food blog, and profiled in The New York Times. Of course, this kind of success doesn’t come purely from good vibes. Catron and Outlaw are meticulous about their craft. When asked about the secret to their fish fry, the two launch into an incantation of musts: peanut oil, soaking the catfish in buttermilk and proper cooking techniques.

“Have you ever had fried fish and if you were to hold it in your hand, it’d fall apart?” Catron asked. “That’s not good. It needs to be thick. It needs to be crunchy on the outside and tender and flaky on the inside.”

Outlaw describes how they bread their fried pickles individually. The two have a similar list of musts for BBQ, which they see as another need to be filled in Brooklyn. “Maybe a future food truck,” Outlaw says.

While waiting to resurrect the fish fry truck for the summer—it will likely make its first appearance May 6 at the New Museum’s Festival of Ideas for the New City, across from 179 East Broadway, then orbit again around the Morgan Ave. stop on weekends—the two have participated in a series of food-centric art shows.

“Our last show was at Allegra LaViola Gallery. We had a table that was 10 feet up in the air. It was clear, the glasses were clear, everything was clear. So people were dining and everyone was looking up at what they were eating.” 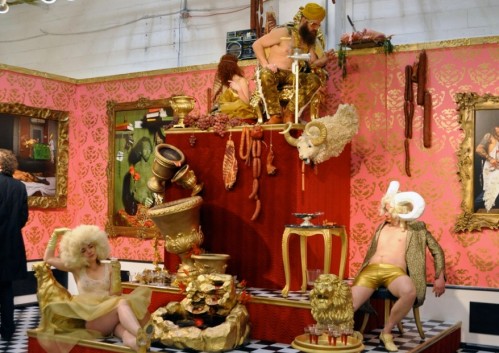 Jen and Paul at the Artists Wanted booth at SCOPE

At the recent SCOPE art fair, the duo’s Bacchanalian performance consisted of Paul cutting up raw meat and throwing it into a sausage grinder as Jen chewed grapes and spit the juice into a wine fountain–while both were in full baroque regalia. Both the wine and the sausage were then served to attendees.

As Catron made a slicing gesture to describe the cutting of the raw meat, a few people in Boneshakers glanced awkwardly toward our table. The vegan association of the café hadn’t occurred to me when planning this interview. Not until I asked Catron to recount her strongest food memory did my mistake become glaring.

“From a cow that had a name,” Outlaw explained.

“From my best friend the cow! We would slaughter it and stick it through the meat grinder and we’d have freshly ground hamburgers that day. I can still remember that flavor, it’s the best flavor you’ll ever have, so good. “

Her passionate description was a reflection of the kind of love the two of the put into their food. I’d even bet that her revelry whisked a few vegetarians pleasantly back to their burger-eating days. Catron and Outlaw have a talent for bringing you into their world. Eventually, though, she seemed to remember where we were, always attuned to her audience.

“My parents also had a huge garden, so there were fresh fruits and vegetables. So that was good too.”