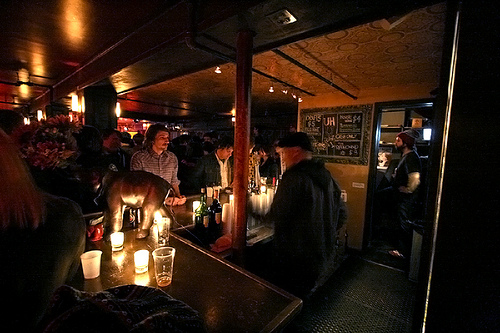 Park Slope’s Union Hall is known for a lot of things. The bocce court, the Floyd burgers, Keith the bartender, the cozy library décor, the stroller ban, the one-time neighborhood noise drama, the meat market vibe on the weekends, etc. But to me Union Hall is a music venue. Tucked away in the basement, behind the bathrooms and unbeknownst to probably half of its patrons is a well-established venue that hosts bands, comedy, burlesque, book readings, DJs and other random whathaveyou.

Full disclosure: I sometimes work the door down there.

See, I have a bad habit of ruining things I like by meddling in their creation. You’d think I’d learn that “behind the scenes” is never as exciting as “in front of the scenes.”

I liked reading magazines until I started working for one; now they represent stress and competition. I liked music, so I joined a band, only to naively realize that performing—the awesome fun part—is only around 10% of the deal. I like going to bars so I started bartending. All fun and games till someone pukes in the bathroom. Live shows are a favorite activity, now I work at a music venue. The point here is that of all these gigs, working the door at Union Hall has been the least disappointing.

I should note here that life as a door girl is not by any stretch of the imagination challenging. I show up, I distribute wristbands and drink tickets to the bands, I have a look at the will call and guest lists, I open the doors, I take money and I start stampin’ hands. Emergencies come in the form of deciding when we’re sold out, re-inking the stamp mid-shift, or running out of small bills. (The horror!) Otherwise, I enjoy (or in rare cases, endure) live music, direct 50 or so people to the bathroom, tweet (a lot), smirk at drunk people, and make a little cash.

But the main reason I like this job is shows like the one I worked Saturday night. It was Misstallica, an all-lady Metallica tribute band, with support from Body Talk, and all-lady Ratt tribute band. Call it a novelty, or a gimmick or a whateverthefuck you want, these chicks totally rocked. They packed the dark 98-person basement with a very un-Union Hall-like crowd, which made me regret my choice of Cosby sweater and lack of eyeliner. Plenty of one-time collar poppers from upstairs wandered over on their way to the bathroom, hoping to find karaoke or a dance party, only to stumble away very confused. There were black nail polished glam-y metal dudes for Ratt, unshowered ratty-haired metal dudes for Misstallica, creepy sleazeball dudes for Hot Chicks on Stage in General, and one black metal dude drinking a glass of chardonnay.

One group not represented was women, actually. In fact, the mother of a Misstallica member was the only female on the guest and will call lists. (Misstallica, as it turns out, is very young: Some members are just out of high school and they traveled from Philadelphia with an adorable heavy metal stage mom. Their youth actually posed a minor problem for the venue as they were unable to get past the bar’s front security guard. Further sidenote: The band was once called Clitallica but a band member’s mother requested the change. Which, awesome.)

So, they killed it. Lighters were held in the air. Heads were banged. Cans of beer were crushed. Sweat was, uh, sweated. Gigi Gleason, the group’s James Hetfield, sounded, amazingly, just like him. Between songs she growled at the crowd, terrifyingly, “CAN I GET A HELL MOTHERFUCKIN YEAH?” which was greeted, to everyone’s delight, with a powerful HELL MOTHERFUCKIN YEAH. Then she said, very sweetly in her real however-young girl voice, “Thank you guys so much for coming to our show,” and the crowd exploded in laughter.

It’s randomly wonderful shows like Misstallica that keep me behind the venue’s podium.

Erin Griffith lives in Boerum Hill. She is the keyboard player for Team Genius and a big fan of lots of bands, probably even yours. She’s reviewed a few other venues for BB, including Shea Stadium, Barbès , and The Rock Shop.