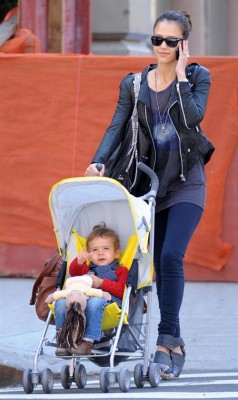 For a while now I’ve been thinking about the way technology is changing the way we parent, and the way our kids grow up. At first it was just a gnawing sense that all this constant texting, IMing and facebooking can’t be healthy–or at least not as healthy as the note-passing and three-way calls of my youth.  Then I read the book Alone Together: Why We Expect More from Technology and Less from Each Other, and it affirmed all that I secretly hate and fear about being so connected.

The author, MIT professor Sherry Turkle, spent 15 years researching the book, and shares horrifying anecdotes like the daughter who complains that her mother won’t look up from her phone when she picks her up from soccer. I say horrifying, because this is not so different from my two-and-half-year-old telling me “No Computer!” when I’m staring at the screen and ignoring her.

I try to reign in the multi-tasking, but I often fail. I once sent an email out at 5 o’clock, not thinking that the woman on the other end would respond immediately. She sent a string of replies back, then apologized for sending so many at once. She was discombobulated, she explained, because it was dinnertime and she was trying to feed her three kids. I remember thinking to myself, “Then why are you emailing me now?” Yet there I was, reading each email as it came in and putting my own daughter’s dinner on hold.

The problem with the networked life, at least for some of us, is that it’s like crack. However attentive you aim to be as a parent, having a device in your hand that gives you a constant stream of data is just too powerful to ignore. Particularly if you work at home–or come home early because you can work there too–and convince yourself that being physically present while working is better than being in an office, away from your kids. I sometimes think back to the afternoons that I let myself in before my folks came home (I’m an only child) and wonder if the latch-key method was actually better than the telecommute. At least it wasn’t a tease, or a chance to misconstrue their availability. (Then I think, how crazy is it to let an eight-year-old come home alone?!)

Throughout Turkle’s stories of parents buried in Blackberries, it’s clear that she laments this new hyperconnected life. When we came of age, there were long stretches of time when we could not be reached: bike rides in grade school, aimless drives in high school, and finally, that black hole of time spent going wild and figuring shit out at college, when calling home meant standing in the hall of your dorm, telling half truths on the pay phone. This disconnected time wasn’t always time well spent, but it was uninterrupted and unsupervised, and I managed to grow up. (I also wrote a ton of letters in college, and mourn the death of those too.) So of course I side with Turkle when she questions how adolescents can mature if they’re always a send button away from someone who’ll console or advise them.

I also realize that while I theoretically do not want to give my daughter a cell phone that she will use to constantly text her friends in school (and later, to constantly text me from college), I know I’m going to want to reach her at any given moment. And I know this is the norm. Though cell phones are technically not permitted in NYC public schools (UPDATE: they just approved them), unless there’s a metal detector kids are sneaking them past the door. And while schools may ask parents to call the office instead of calling or texting their kids directly, most ignore that perfectly sane request. (As I will.)

So here we are, arming ourselves and our kids with phones, but rarely using them for anything more than email and texts. As Pamela Paul wrote recently in the Times (“Don’t Call Me, I Won’t Call You”), the strange byproduct of a world filled with smartphones is that no one talks on them anymore. Instead we waste time going back and forth over email or text because people get freaked out by talking. But I’m pretty stubborn about letting this medium slip away. When it comes to the women I’m closest to, I still prefer a quick chat to a text. Even if it means having four distracted conversations at once. (“Yes, honey, one second. What was that?”)

As parents in the digital age, it’s doubly hard to cling on to the way we used to communicate. There’s even a brand new app, RedRover, that is attempting to automate the playdate. Its founder, a New York City mom, was an early beta tester of foursquare, and coupled some of its most compelling features–like the ability to leave “tips” about places–with a private system that allows you to share events and plan dates within a closed network of friends.

RedRover has the capability to make navigating the city with kids much, much easier. You can search for kid-friendly spots wherever you happen to be, find clean bathrooms in proximity, plan meetups with friends on the fly, and discover upcoming events from Time Out Kids. I suspect it will take off with the tech savviest of parents–the ones who are twittering and checking in everywhere regularly. Of the four friends I asked to sign up, one didn’t have a new enough iPhone to upgrade to the 4.0 OS required for the app, another said she would but didn’t, and another I had to strong-arm into signing up, while we were hanging out together. So until my friends magically become early adopter types, I guess I’ll be making playdates the old-fashioned way: emailing them an idea (maybe from RedRover!), or calling them on the phone, and hoping it works out. (It often doesn’t–schedules don’t align like they used to.)

I’m not bummed by this–the truth is, I’m networked out. I barely update my facebook status because too many of my “friends” are relatives and acquaintances. And while I know I can tightly edit who sees what, I just don’t have the energy or the compulsion to share my life online. Most of my working hours are spent in front of a computer, and parenthood has already made me disconnected from my real friends. If my personal relationships get any more virtual, I’ll never leave the screen.