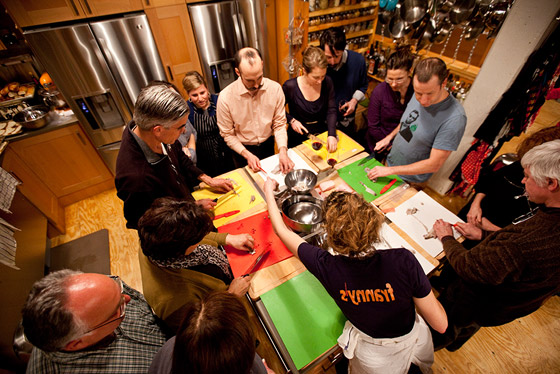 Your eggs are organic. Your chicken is free-range. Your beef is grass-fed. But do you know where your halibut comes from? With Brooklyn’s fishing village past long behind it, local restaurants and purveyors are more likely to stock farmed tilapia than pole-caught tuna or Jamaica Bay mackerel. That’s changing though, thanks to ocean-minded entrepreneurs and activists around the borough.

Sean Dimin co-founded Sea to Table with his father in 1996 to connect New York City chefs to fishermen in the West Indies. They started the Downtown Brooklyn-based company after observing the simple beauty of very small-scale fishing practices in a village in Tobago. “We just thought that a fisherman in Tobago pulling each fish in hand-over-hand was an inherently sustainable practice and a continuation of the way their fathers did it,” Dimin explains. “You could see the close relationship between the fisherman and the fish, and we wanted to share that story with chefs in New York.”

Concern over food safety and sustainability has helped Sea to Table gain a following among the more conscientious chefs and purveyors in the city, and especially in our food-forward borough. “In Brooklyn, it’s ever-present, whether you’re out to dinner, at a bar, at the library,”says Dimin. “Everyone eats, and more and more people are interested in what they eat. If you mention fish, people are curious. They want to know ‘Is farmed salmon bad? Is wild salmon all good?’ And it’s inspiring to me that people are asking these questions.”

In addition to Tobago, Sea to Table is now sourcing sustainably caught seafood from the Gulf and Alaska, and Dimin is hard at work extending his network of above-board fishermen to more local stomping grounds–Montauk and the Northeast. “These waters are really rich with fish,” says Dimin, who himself routinely fishes in the still-fertile Jamaica Bay. “Restaurants should be using the fact that their fish is local and sustainable as a marketing tool. If you’re at a restaurant and the menu doesn’t say where the fish comes from, ask. If the server doesn’t know, he’s gonna get embarrassed and ask the chef. And if the chef doesn’t know, he’s gonna be embarrassed and ask his purveyor. And if he doesn’t know, he’s not going to work with him.” 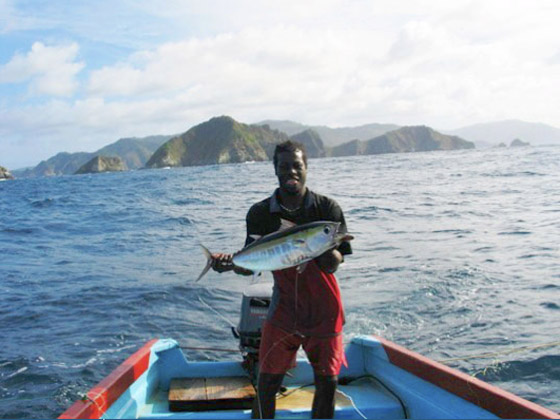 One of Sea to Table's fishermen in Tobago.

Dimin and Sea to Table aren’t the only ones working hard to publicize the importance of responsible fishing practices in New York. Another Brooklynite, Greg Yagoda, made the decision to devote himself to sustainable fishing after a scuba-diving trip where he witnessed first-hand how industrial fishing was decimating underwater ecosystems in the Caribbean.

After studying marine biology in college, he began searching for ways to eat responsibly and educate others about how to do the same. “I just remember how hard and confusing it was for me living in New York City to eat sustainable seafood,” says Yagoda. “People eat grass-fed beef, but no one thinks twice about going out for sushi.” Now a graduate student at Pratt studying visual communications, Yagoda has found a way to fuse his passion for the ocean with his upcoming thesis. “I felt that there was a lot of confusing information out there and that not many people were going to take it upon themselves to do the research.” The result has been two events he’s organized in Brooklyn in the hopes of educating people about how to eat seafood responsibly. The first, a cooking class at Ger-Nis taught by Franny’s chef, John Adler, was a huge success. For ocean lovers who may have missed it, Yagoda is spearheading a dinner on April 12at Applewood in Park Slope in collaboration with chef David Shea. The menu is based around sustainably-sourced seafood and a portion of the ticket sales to the event will go to the Blue Ocean Institute, an organization focused on ocean-centric research and education.

Recent concern regarding the safety of fish from Japan, as reported in The New York Times yesterday, is all the more reason to seek out fish and seafood you can trace back to its origin. “We import a large percentage of fish from Japan, so it’s definitely important to keep that in mind when eating seafood,” says Yagoda. When in doubt about how sustainable a particular type of fish might be, consult the Monterey Bay Seafood Watch–there’s even a handy smart phone app for when you’re out and about shopping.

And abide by Yagoda’s simple strategy: “Eat smaller fish because they’re lower on the food chain and require less energy to reproduce than larger fish.” That goes for shellfish, too: mussels, scallops and oysters–yes, oysters!–are all safe bets. Sometimes there’s no need to sacrifice luxury for scruples.