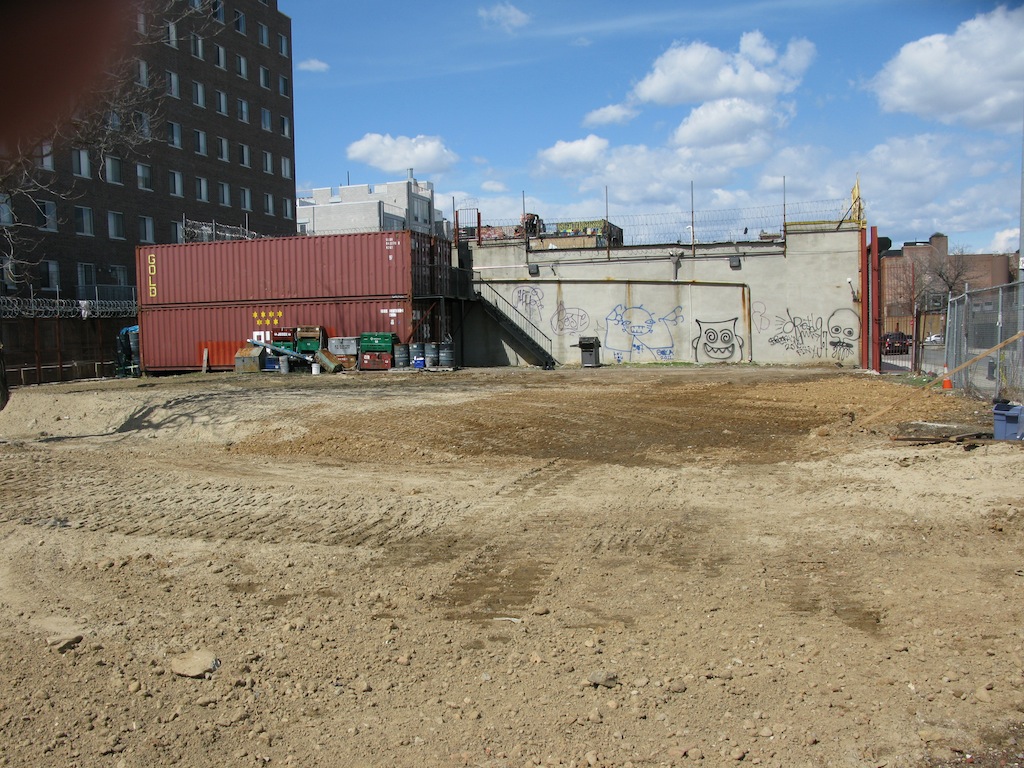 Haphazardly stacked cinder blocks sit atop a bed of charred rubble; a pair of worn-out work boots lay upended, their laces untied and covered in ash; a melted plastic lighter, so contorted by extreme heat it looks almost like a sculpture. This in the scene on the outskirts of an otherwise impeccably excavated lot on Walworth Street in Bed-Stuy. They are the only visible remnants of the Brooklyn Free Store, which burned down nearly a month ago.

In the aftermath of the fire, NBC New York reported that the FBI was helping with the FDNY arson investigation of the fire, as a possible domestic terrorist connection to the group Animal Liberation Front. Gothamist wondered why one anarchist group would target another, writing, “perhaps this is just part of some internecine anarchist squabble that’s not worth the headache to unravel.” We profiled the Free Store and A New World in Our Hearts, the anarchist collective that ran it, a few months ago. After we ran our article about IOH, we were contacted by a number of people who wanted to highlight just such a squabble, so we reached back out to members of IOH and to the individuals who had complained about our coverage of them, to hear what they had to say about the fire. 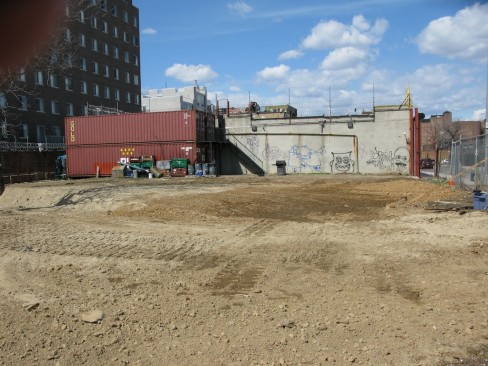 The lot where the Brooklyn Free Store once stood.

“March 19. Saturday. Around 3 o’clock.” That’s how Thaddeus Umpster, a member and organizer of In Our Hearts, began when asked to describe the fire. “Nobody was home, but the police were there when I got home. There were a number of fire trucks there.” Umpster and five housemates lived in the three-story house next door to the free store, which was bulldozed due to damage following the fire.

The fire, which leveled the Free Store, was the third suspicious fire at the Free Store in the previous six weeks. It was the fourth fire on the premises over the past year, Umpster said. The first occurred last June, and appears to have been directly targeted at Umpster himself. His cargo bike was set on fire while chained to the fence between the free store and his house.

Umpster, whose legal name is Dennis Burke, is not new to such hostility. Prior to joining IOH when it began in 2005, Umpster appears to have been a controversial member of the city’s anarchist community, resulting in severed ties and bad blood between himself and several anarchist organizations over the years. Most of these groups have since disbanded, though their members are still around; some of whom have taken to the internet to air their grievances against Umpster and, in some cases as an extension, IOH as well. None would comment for this article. When asked if his past could possibly have any connection to the fire at the free store, Umpster said that he didn’t wish to speculate.

“They’re the only people I know who have expressed hostility toward the store, but I don’t know who burned it down,” he said. He then indicated that he is confident that the FBI investigation of ALF is “off base.” “I’m not sure if there’s somebody who calls himself an anarchist is responsible, but I wouldn’t consider them an anarchist if this is the type of behavior they engage in,” Umpster said. “I just think this is something that fascists do.” 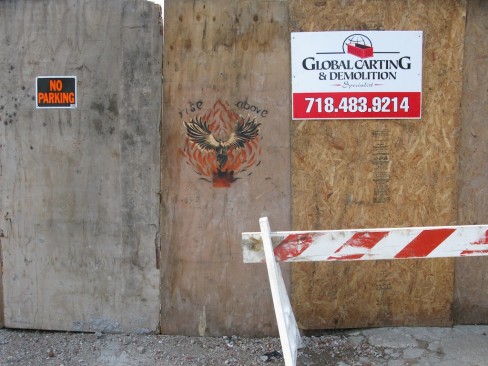 The former site of the free store is now a construction zone.

Meanwhile, members of the neighborhood community are already feeling the Free Store’s absence. “They’re all really great kids,” says Joel Hamilton, a music producer and neighbor. Hamilton and fellow neighbor and photographer Torkil Stadval reminisced about the free store a few Saturdays ago, standing in the parking lot next to where it once stood, looking over what they consider to be an obvious construction site in the making. Both were present the afternoon of the fire. “It’s a super bummer. The word on the block is that it’s going to be developed immediately.”

Hamilton has lived in the area since 2005, and counts the free store as one of the few shining spots. “What a shitty, karmically ironic thing to have happen,” Hamilton says. “ The only people in the neighborhood who are actually trying to help, are the ones that wind up with their house burned down.”

For now, IOH remains undeterred by arson, preferring to focus on rebuilding rather than revenge.

“We’re going to rebuild the free store in the same area, and we’re all going to move into another place together,” Umpster said. “We’ve actually put down rent on a place already. I’m not hoping they get caught. I’m not hoping they go to prison or anything like that. I just hope that they stop what they’re doing if they’re going to be doing this type of destructive, hurtful behavior.”