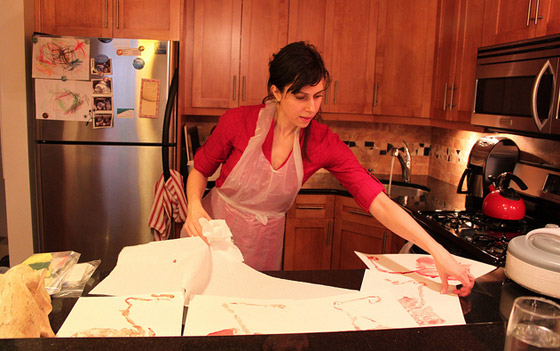 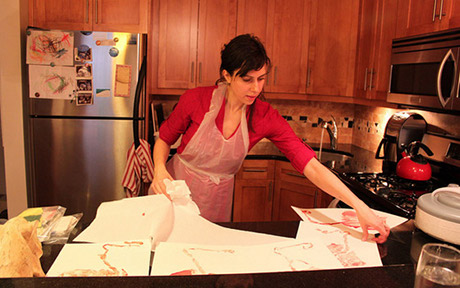 Sharon Lewinter has always been an adventurous eater, and wouldn’t say no to a plate of glistening red tuna tartare or beef carpaccio. So the idea of eating a small slice of her placenta, flavored with unrefined Real Salt mined in Utah, didn’t seem all that strange.

This nutrition counselor wasn’t looking for a culinary dare. She joined the growing number of new mothers who are participating in an ancient ritual once confined to a small group of holistic birth advocates–placenta eating. Having battled depression as a young adult, Lewinter, 32, was worried that postpartum depression would creep up on her. Her online research turned up placenta consumption as an all-natural way to deal with the problem. Lewinter did taste a small sliver of the placenta, but she was put off by eating the whole organ, which is about the size of a large disc of dough. So she turned to a growing cottage industry–placenta encapsulation.

Lisa Fortin, 35, makes nutritional capsules out of placentas in the homes of her clients through her Brooklyn-based business Placenta Healing Arts NYC. The process dates back to the 1700s in Europe, and dried placentas have been used in Chinese medicine for centuries. In the United States, Fortin said, placenta consumption is more common on the West Coast but it is slowly catching on elsewhere.

Fortin decided to start her business when she couldn’t find someone to encapsulate her second child’s placenta. Processing it down to a powder seemed more palatable. “It seems a little less personal than eating a piece of meat that you know, came from your body,” she said.

The placenta is the organ that allows the exchange of oxygen and nutrients between mother and child during pregnancy. It contains protein, vitamins like B6 and minerals such as iron, and if consumed, according to believers, it can replenish a new mother’s body by adding what was lost during birth. In Western culture, it’s usually considered little more than post-birth clean-up–a gooey, bloody mess that is often incinerated at the hospital.

“I looked on a couple of message boards,” said Fortin. “My home-birth midwife didn’t have anyone to refer me to.” So she and her sister decided to teach themselves how to do it. The former jewelry designer not only encapsulates the placenta for $250 but makes a tincture from part of the organ and keepsake art prints using the placenta’s own blood on watercolor paper for an extra $25. 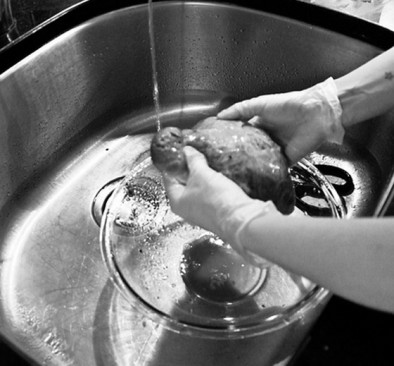 Prepping the placenta for encapsulation

The encapsulation process takes two days. Immediately after birth, the placenta needs to be refrigerated or frozen. Some specialists process it in the family’s home to reduce the risk of contamination from outside germs. Once rinsed, it’s steamed with frankincense and myrrh or ginger and lemon to mitigate the smell, likened to liver. It’s then sliced into steak-tip sized strips, dried to a jerky-like consistency, and ground into a fine powder that can be poured into capsules. The refrigerated pills can be consumed over the one- to two-month post-partum period.

Some doctors and medical researchers are skeptical about the benefits of placenta consumption. Patrick O’Brien, a spokesperson for the Royal College of Obstetricians and Gynecologists in the U.K., where encapsulation is more common, said in an email that there is no convincing evidence that eating the organ is beneficial. But there are no known risks, either, said O’Brien, “Assuming it’s your own placenta.”

Greenpoint mom Lelia Stina, 33, didn’t feel a dramatic difference after eating her capsules, but thought they may have contributed to helping her cope with a fussy baby through a difficult winter by averting fatigue, elevating her mood and helping with lactation. Her husband, she said, was open to the idea and even carted the placenta home on the bus from the hospital in a cooler.

Sometimes just getting the placenta after a hospital birth can be difficult, which is why doula London King from Pushlove in Williamsburg suggests requesting that the hospital save it in advance. Midwives, however, are often in favor of the practice so this is less of an issue after a birth at home or in a birthing center.

“A woman puts all of this time and energy into eating good food during the pregnancy, all of which goes into the placenta,” said Lewinter, who also encourages moms-to-be to consider encapsulation. “At least freeze it and think about it.”