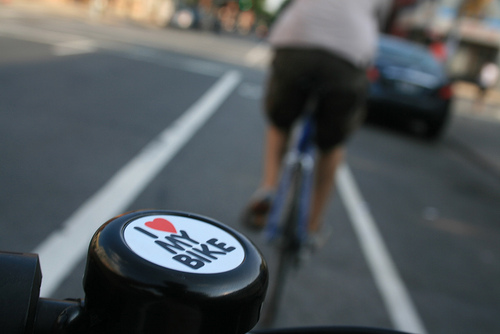 For bikers, and anyone itching to get back on the saddle, the city is about to enter bicycle mania, and not in a lame bike lane wars kind of way. May is Bike Month 2011, and to usher it in, the New Amsterdam Bicycle Show, the LES Bike Bonanza and the TD Bank Five Boro Bike Tour are all happening this weekend. If you’re in the market for new wheels or a tune up, check out our guide to awesome Brooklyn bike stores below or head to the Bike Show, where you’ll find many of the shops highlighted on this list. With all of the upcoming group rides and celebrations—like Bike Night at Brooklyn Brewery (May 11); the Brooklyn Bike Jumble (May 14); Bike to Work Day (May 20); the Brooklyn-by-Bike Scavenger Hunt (May 31); and the family-friendly Tour de Brooklyn (June 5th)—you’ll need one.

All-Variety Bike Shops
Ride Brooklyn, 468 Bergen Street, Park Slope, 347-599-1340
Types: Everything from commuter, to kids, to elite racing bikes; they have a large selection of Electras (newfangled city bikes) in all sorts of cool colors.
Price Range: Commuters range from $300-800; Road racing bikes go from $700-several thousand.
Popular Bikes: The Linus Dutchi and the Cannondale Quick commuters (both $400 and up). Most popular road bike is the Cannondale Caad 10 ($1500).
Service Package: All bikes come with a year of free service, including two full service tune-ups.
Tune Ups: $70 plus tax

Greenpoint Bikes, 1078 Manhattan Avenue, Greenpoint, 718-389-3818
Types: Half are used but refurbished in all varieties–Schwinns, cruisers, hybrids, mountain bikes, kids. The other half are new, and primarily single speeds for commuters, but they carry higher end road bikes, folding bikes, 3-speed hybrids, and do custom builds too.
Price Range: Used bikes are roughly $200-$400; the starting price for new bikes is $150 for kids bikes, $350 for commuters and $500 for road and mountain bikes.
Popular Bikes: Urban Uno single speeds from KHS ($380) and the Cutler 7, a 7-speed commuter by Origin 8 ($350).
Service Packages: Used bikes are sold as is with a one week return policy. New bikes have a 60-day store and manufacturer guarantee.
Tune Ups: $60 including tax

Brooklyn Bike and Board, 560 Vanderbilt Ave., Prospect Heights, 347-295-2339
Types: Three quarters of the inventory is used, refurbished Schwinns, Peugots and other steel-frame bikes from 60s, 70s, and 80s, converted into single or 3-speed bikes; the remaining quarter are single-, 3- and 5-speed bikes by Torker and Swobo.
Price Range: Used selection ranges from $250-$450, new bikes range from $350-$750.
Popular Bikes: Torker U-District single speed, $350.
Service Package: Warranty and free service on all bikes for six months.
Tune Ups: Start at $45 plus tax 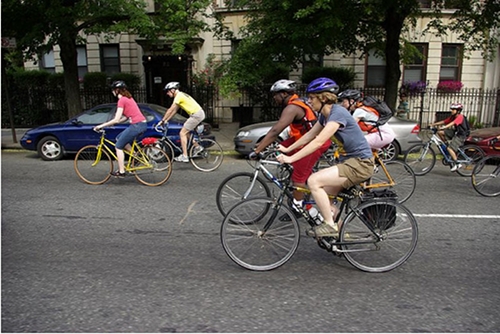 Custom Bikes (see also “Brooklyn-Made Bikes” for other shops like NYC Bikes)
718 Cyclery, 461 7th Avenue, South Slope/Windsor Terrace, 347-457-5760
Types: Collaboratively-built bikes in a range of styles, from cross-country tourers to park racers to daily commuters. Plus new and restored bikes by Leader, Public Bikes, Surly, Mission, Pake and others. (Read “Building a Friendlier Bike Shop” for a full profile.)
Price Range: $450-$1200
Popular Bikes: Surly Crosscheck ($1100) commuter bike; track bike communal build ($1200).
Service Package: One free tune up with all purchases. For collaborative builds, free adjustments for life of the bike. Will even reimburse work that has to be done at another shop if unavailable.
Tune Ups: $59 plus tax or $49 plus tax for fixed/single speed bikes

Used Bikes
Brooklyn Vintage Bicycle, 51 Fane Ct., Gerritsen Beach, 347-733-2079 (Note: It’s a hike but came highly recommended to us (and on Yelp). Peter sells out of his house, but accepts all credit cards and sells helmets, locks and the like. To get there without a car, take the B or Q to Kings Highway, get off at the Quentin Road exit, take the B 31 bus across the street, get off at Devon Ave., walk down to Fane Court, second house on right. Call ahead to make an appointment. You’ll be able to bike home.)
Types: Refurbished and serviced road bikes, commuters, and cruisers from the 60s, 70s, and 80s such as Fuji, Panasonic, Centurion, Myata, Schwinn, Ross, and Raleigh. Can customize to cruiser, single speeds or track bikes. No kids’ bikes.
Price Range: Typically $180-$200. $300 and up more rare bikes like vintage Raleighs.
Popular Bikes: Fuji racing bikes.
Service Package: 30-day warranty on all mechanical parts.
Tune Ups: $40

Shane da Bikejack, aka the Tallest Man at the Brooklyn Flea, every Saturday in Fort Greene and Sunday in Williamsburg
Types: Vintage refurbished bikes and “conversions” of vintage steel-frame bikes to single speed and fixed-gear bikes.
Price Range: On any given day price ranges between $100 and $1000. Shane swears his bikes are at least $100 less than what you’d pay in a shop.
Popular Bikes: Depends on the day. Typically Shane will theme his selection by the bike’s origin. The week before last it was the Revolutionary War, where he sold many Raleighs; the theme this coming weekend is the “English Channel”–English and French bikes.
Service Package: 60-day warranty on tires, tubes, brakes, gears. Also, if you’re only in town for the summer, you can purchase a bike and he’ll buy it back at 60 percent of its original price if you return it in good condition.

There are many other great bike shops in Brooklyn (like Bicycle Station!) that we couldn’t list in full. Add your favorite in the comments.