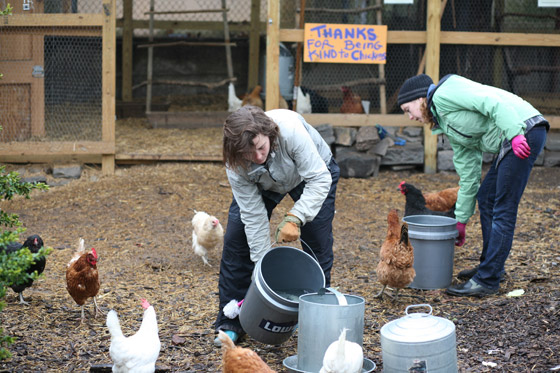 Martha Jackson and Elizabeth Ayer feed the chickens at the Imani Garden in Crown Heights.

On a recent rainy morning the clucking coming from the Imani Garden in Crown Heights drowned out the sounds of April showers. Forty-two chickens–white, black, brown and speckled–roamed around the community garden-cum-chicken run, pecking at pieces of lettuce or the occasional shiny rain-boot buckle, as two young women replenished the hens’ water troughs from buckets filled at a nearby fire hydrant.

“Chickens are proud,” Ayer said of her charges. “They’re really loud after they lay an egg.” On perfect cue, a praline-colored chicken alighted from an egg,  “bock-bock-be-gocking” its arrival to her fellow hens.

To an outsider, the scene feels surreal–chickens juxtaposed against high-rise apartments. But for Ayer, as a member of BK Farmyards, a decentralized network of urban farming initiatives established by Stacey Murphy, it’s all just a day’s work down on the farm.

In 2009 Murphy began turning backyards into farm plots. She wanted to “blur the lines between consumers and producers,” she said, “in order for us all to be co-producers of the foolscape.”

The project blossomed into BK Farmyards, an ever-expanding umbrella of urban agricultural endeavors, which now includes bee-keeping; a youth farm and farmers market at the High School for Public Service in Crown Heights (run in partnership with Green Guerillas); backyard farms; and of course, the chickens, which operate through a partnership with the New York Restoration Project. 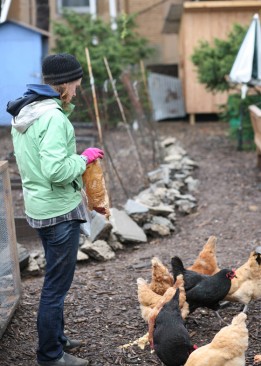 Elizabeth Ayer is kind to chickens.

“Our food system is one giant distribution headache,” Murphy said. “We waste so many precious resources trying to move perishable food around this earth, and all along the way, we are losing nutritional value.” She has discovered that the trick to serving a hyperlocal community from a decentralized network of farms is to share resources. To that end, BKFY has established community supported agriculture programs–one each for eggs, the backyard farms and the youth farm.

Customers pay upfront or in installments for each share–a weekly allotment of eggs, or vegetables–based on a sliding-income scale. This provides BKFY with the revenue necessary to operate for the season. “Part of being a food-justice-based organization is that we’re not just about allowing people to buy our food. It’s about really changing the food system and allowing people to have more of a connection to the food they’re consuming,” Ayer said.

Stephanie Schacht became more connected to her food when she started as a chicken apprentice six months ago. Once a week she shows up at the Imani Gardens for her regular shift at the BK Farmyards coop, where she lets the chickens out of their pen to range freely in the garden while she prepares their feed, checks that their water troughs are clean and collects any eggs laid since the last shift. She may also change the chickens’ litter–coffee chaff, the husks of beans blown off during roasting, donated to BKFY by Stumptown Coffee Roasters.

Having grown up in a rural area of Florida, Schacht says she was familiar with livestock; her family used to keep cattle, but as a teenager, she traded farming for academics and the beach. BK Farmyards has allowed her to get back in touch with her agricultural roots. “I had no experience with chickens whatsoever,” she said. “It surprised me how much I enjoyed it. I think there’s this very simple pleasure of connecting with nature.”

Two years ago, Foxtrot was just Adrienne Fisher’s backyard. She and her husband Zac made plans to farm it, but with three children and busy lives, they weren’t able to bring their garden dreams to fruition until a friend introduced the couple to Murphy. BKFY drew up new plans, built raised beds, and now three seasons of produce have been sowed and reaped on the 800-square-foot lot. The Fishers receive 25 percent of the produce grown on their plot and the rest is divided amongst CSA members.

“It’s just so great to see everything growing,” Fisher said. “It’s great to know our previously fallow and horrible backyard is doing something productive.”

The Fishers’ backyard is the precisely kind of transformation Murphy was hoping to cultivate when she started BK Farmyards. Last year the farms produced over 10,000 pounds of produce, over 1,000 people volunteered at the youth farm and at least 500 people bought produce, eggs and honey from BKFY according to her records. Murphy projects they’ll double that this year.

Currently, BKFY actually has a surplus of New York’s most precious commodity–land. They have space that they’re growing into this summer, and right now they’re not looking for any additional backyards to sow. With BKFY flourishing as it is, Murphy has a rare moment to step back and watch her hard work grow.