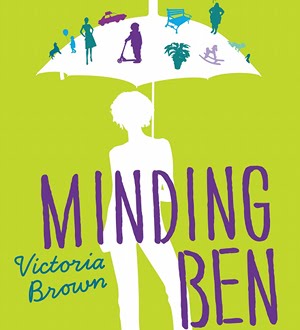 Victoria Brown’s debut novel, Minding Ben, is an eye-opening story of a young Caribbean nanny who works for a horrific Manhattan family. The demands the Bruckners make upon poor Grace are outrageous and wickedly engrossing, while her weekends in Crown Heights, where she lives with a family during the year leading up to the 1991 riots, are a fleeting respite, and fraught with a different set of burdens.

Brown, a Prospect Heights mom, lifted a few details from her life for the book—she too arrived here from Trinidad at 16, and found work as a nanny before entering school, teaching, and writing. (She’s now pursuing her M.F.A. at Hunter and at work on a new novel.) But ultimately Minding Ben is a rich, fictional portrait of one West Indian immigrant’s experience, and a peek inside the lives of women many parents know only as their nannies. Here, Brown shares a few more insights into her book.

The family Grace works for in the book is horrendous–they overwork, underpay and humiliate her. Do they have any basis in your experience as a nanny, or in your friends’ experiences?

I like to say that the novel is a work of fiction, biography and autobiography, but ultimately, it’s fiction. Ms. Bruckner is loosely modeled on one particular employer I had, but I did so much more imagining to make the character into a work of fiction. And, some of the crazy-ass stories I heard from other sitters in the years I’ve lived in America found their way into the book. In truth, the book could have a become a one-liner for all the wacky boss baby-sitting stories I’ve heard.

We get an intimate glimpse of Grace’s and the other nannies’ daily work routines–on the playground, during playdates–and for the most part it seems none of the nannies really like or engage with their kids in a meaningful way. There’s lots of gossiping on park benches and TV watching, or absent-minded care. Is this an exaggeration from what you witnessed as a nanny?

Well I thought I tried to do just that with Evie in particular. She’s such a conniving woman, but she thinks the world of the twins she takes care of. If you notice, the twins’ parents never make an appearance in the novel. They’re always with Evie, even on the weekend. And, she almost gets into a fistfight with one of the other nannies who calls them mongoloid! I do think that when the nannies have bonded into a group, and the children they mind are of similar ages, there can be a more communal feel to the care, especially if they’re at the playground or playing at each other’s houses.

Yes, there are definite moments of tenderness, but I don’t see this throughout. Could it be my interpretation, or did you mean to show that these women aren’t necessarily providing the best care for these kids–not because they’re incompetent, but because child minding isn’t their first choice of work?

I tried to represent a range of care: Grace loves Ben; Petal’s meant to be the exactly the kind of sitter she is (one who should be fired immediately); Evie, with all her human faults, is absolutely and selflessly dedicated to the twins. The other sitters are peripheral characters. Still, I don’t think that they’re not providing the best care, but that they’re not coddling the children. They’re minding them competently while their parents are at work.

You bring to light the personal life an immigrant nanny might experience here in New York. Did you feel like this was an untold story in the wake of The Nanny Diaries? Did that book influence Minding Ben in any way?

I think regardless of the The Nanny Diaries this was an untold story. Jamaica Kincaid had published Lucy long before the ascendency of “nanny lit,” but I hadn’t seen a more contemporary story dealing with such an overt part of NYC life, not from the perspective of the ubiquitous West Indian childminder. I still haven’t read The Nanny Diaries, but by now I’ve been told about the novel enough to know that Grace’s story is wildly different from that book’s protagonist.

In your author bio for the book, you say you employ a part-time babysitter. Is there a difference to you between a part-time nanny and a sitter? Is it a matter of terminology or something else?

And by now, I employ my sitter even less, as my younger child has recently started day care. For a long time, some of the West Indian sitters chafed at the word nanny (ok mostly the Trinis; one of the word’s archaic meanings on the island is slang for vagina). Also, the novel is set twenty years ago, right around the time of the Crown Heights unrest. Women weren’t generally walking around talking about their nannies, their nannies. I don’t think I or any of my friends back then thought of ourselves as nannies. Linguistics change and I’ve asked my sitter friends at Underhill and other playgrounds how do they prefer to be referred as, and the responses are split. I’ve gotten babysitter, nanny, childminder, and hilariously, “the woman who watches the children.”

Victoria Brown will read from Minding Ben Thursday, May 5 at Greenlight Bookstore.