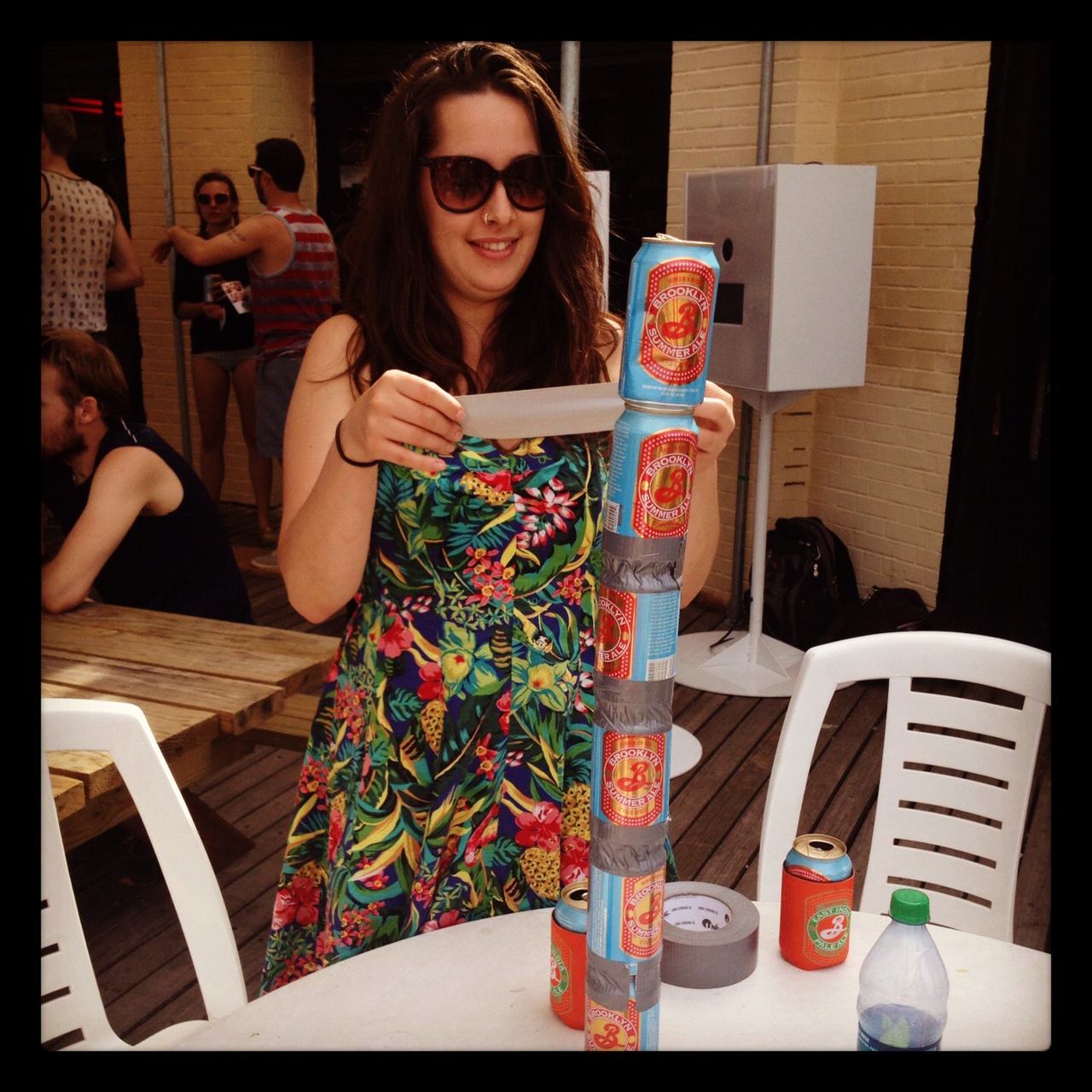 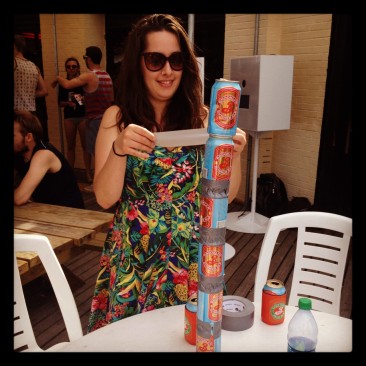 This is what happens in the Rockaways.

This post was originally published on May 17, 2011. The line-up, hours and other details have changed a fair amount over the past year. For a current list of restaurants, events and Rockaway fun, check out the Rockaway Beach Club website.

City beaches officially open for the season on Friday, May 27 for Memorial Day, and although Rockaway Beach is actually in Queens, there’s going to be plenty of Brooklyn on the boardwalk this summer. As sunners, surfers and swimmers return for another season, they’ll be joined by hordes of eaters this year, as three newly staffed food stands open on the boardwalk at 86th, 96th and 106th Streets, featuring dishes from some of Brooklyn’s favorite chefs and food entrepreneurs. 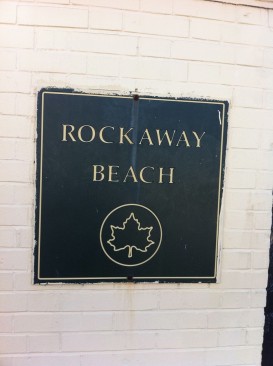 Rockaway Taco owners, Andrew Field and David Selig, submitted a proposal to take over the three boardwalk stands to the New York City Department of Parks and Recreation. As they were drawing up the plan, they decided that the sheer size of the three stands was ideal for a partnership with other businesses. “We reached out to people in the food business who we liked, respected and admired,” Selig explained. (See the list of current parks concessions opportunities here.)

“We’re not following the strict prescription,” Selig said of the parks food vendor rules and the way they’ve been updated for the Rockaways stands. “The standard contract basically says we have to sell Sabrett hot dogs and Snapple–this is less rigid.”

At this point, all three of the stands are planning on opening their doors to the public on May 27, but they also caution that opening weekend will only be the beginning.”This will be a process,” said 86th Street partner and manager Michelle Cortez. “We’ll be coming into full form by about the middle of June but we will open in some capacity by the 27th [of May]–that’s what we promised ourselves.” They’ll be fine-tuning menu items, adding seasonal specials and setting their hours according to demand over the next few weeks, and opening their bars as soon as liquor licenses become fully operational.

Here’s a sneak peek at what you’ll find along boardwalk:

106th St.: This is like seeing one of your favorite bands open for another of your favorite bands. Caracas Arepa Bar and Blue Bottle Coffee are working together, serving arepas, fried plantains, iced coffee and espresso. The two businesses have a friendly relationship at their Williamsburg outposts, and they’re taking those good vibes to Rockaway. “We are super excited to finally bring our food to it’s natural environment–the warm sunny beach,” says Caracas owner, Maribel Araujo.

96th St.: The biggest, by far of the three spaces, 96th is going to be like going to a weekend-long music festival, with a wide variety of bands and scenes. Rockaway Taco will serve Mexican street food, according to Andrew Field. Tortas, elote (corn with cheese and mayo), ceviche and salads will complement the taco-centric menu around the corner from Rockaway Taco’s original location (which opens Thursday). “We don’t want to totally defeat the vibe we have going on down at the shack,” said Field, explaining the two different menus.

Chef Jean Adamson (an owner of Vinegar Hill House ) and Lindsay Robinson formerly of Diner, Bonita and other Brooklyn restaurant standouts, have formed a business called Motorboat & the Big Banana that is like a fry shack with a sense of humor. They’ll serve fries and dipping sauces, including a homemade cheese sauce incorporating bacon and pickles, oyster po-boys, fish and chips and seasonal items like tomato salad and raw oysters when available. They’ll also sell big bananas–chocolate covered frozen bananas dipped in pretzels, peanut, toffee, the works.

The vegan bakers at Babycakes just joined the 96th Street gang as well, and Veggie Island, a farm stand around the corner that sells produce from chef favorite Guy Jones, will add smoothies and breakfast items to the mix. A few other players are still in the process of finalizing plans for the space, and there will be coffee and a bar..

86th St.: This is your classic super group (Cream?, Cactus?, Velvet Revolver?). The Meat Hook and Roberta’s have joined together to form Rippers, along with Michelle Cortez, who has worked at Savoy and on her own catering events. “Rippers is about good vibes and good times,” says Cortez. The menu will feature burgers and dogs made by the Meat Hook, a quinoa black bean burger and other veggie items, boat drinks and more. There’s a surfing beach at 87th Street, so Rippers will also have a pro-shop co-curated by Chris Gentile from Williamsburg surf shop, Mollusk, where they will sell basic beach supplies like towels, flip flops, sunscreen and Sun-In, for that 80s nostalgia you ordered. Rippers will be open from 7am to 7pm, seven days a week, offering a surfer’s breakfast each morning.

Cortez indicated that Rippers plans to deep fry a number of items, and while she wouldn’t reveal their exact plans, she did say that they have been “experimenting with a fried pickle on a stick.” She also spoke highly of a Mexican wedding shot: a shot of tequila following by a lime wedge dusted with sugar on one side, finely ground coffee on the other. 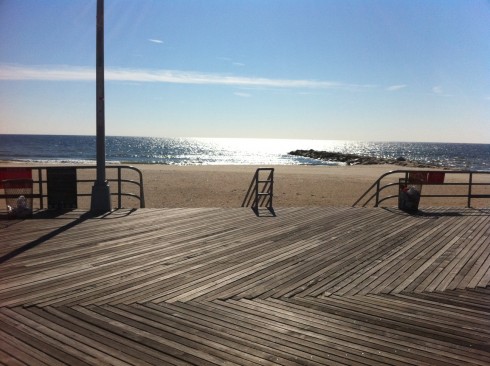 One thread that seems to run through all of the stands is the desire to keep costs down and quality up in an effort to blend into the neighborhood. “We want to have fresh food that is fairly priced so you can walk over to the boardwalk and get a tomato salad with feta or whatever we’re making that day,” says Jean Adamson. “We don’t want to come off like, ‘We’re fucking taking over here.'”

The bar at Rippers will close at 7pm most nights (though it will stay open later for special events like surfing competitions) to make way for long-standing local bars. “Anyone who spends the day at Rippers should walk around the corner and spend their night at Connolly’s,” says Cortez.

The Parks Department has been working to emphasize local food vendors as much as possible over the past few years. Though he would not yet comment on the record about the Rockaways, Brooklyn Parks Commissioner Kevin Jeffrey had plenty to say about the parks food revolution in general. “New Yorkers have a very sophisticated palate,” he told Brooklyn Based. “And to be honest, the pretzel, the hot dog and the knish were not cutting it terms of street food.”

Jeffrey pointed to the Red Hook vendors as a watershed moment for the relationship between the Parks Department and authentic, locally made food. He noted that while Parks had to create some sort of oversight system for the vendors selling arepas, huaraches and tacos, it became an opportunity to bring unlicensed food cart cooks into the fold of legitimate businesses, while bringing soccer fans and avid eaters to the ballfields alike. “How wonderful to have non-processed, freshly prepared food that are healthier and more diverse,” Jeffrey said of the recent addition of local vendors to city parks. “The picnic table, the park bench–we have a long history of inviting people to eat in our parks.”

So how do you get there? Here’s your transportation guide to the Rockaways this the summer:

Rockabus: The Rockabus leaves from Williamsburg on the weekends, costs $18 round-trip. Best deal in town.

Ferry: The New York Beach Ferry travels between Pier 11 near the South St. Seaport in Manhattan and Jacob Riis Park on Saturdays starting Memorial Day weekend. The ferry leaves from Pier 11 at 9:15am and 11:45am, and returns at 2:30pm and 5pm. Tickets cost $15 each way or $25 round trip with a $5 charge for a bike. If you’re not biking, take 22 and the 16 bus once you arrive down Rockaway Beach Boulevard to the beach and food stands.

A Train: First off, we’d highly suggest taking a look at the schedule (yes, there’s actually a schedule). You want to get on the A train headed for Far Rockaway, the same train that takes you to JFK. The A only runs out to Rockaway Beach Boulevard and 86th through 106th during rush hours, so you need to get off the train at Broad Channel and transfer to the shuttle which has stops at 90th, 98th, 105th and 116th Streets. It’s just a few blocks to the boardwalk, which is on the ocean, not the Jamaica Bay side of the island peninsula.

Bike: This is not the shortest route, but we’d suggest getting to Prospect Park, then following Ocean Parkway and its protected greenway all the way to Neptune Avenue which will then turn into Shore Parkway and take you straight to the Marine Parkway Bridge. And remember, you can always take your bike home on the train.

LIRR: Taking the LIRR from Atlantic Terminal will take you just under an hour and cost about $7 each way. Trains leave hourly from Atlantic Terminal and from Far Rockaway Station on the weekends. You’ll definitely want to bring your bike on the LIRR, though. The last stop is around four miles from the nearest parks food stand, but you can ride your bike along the boardwalk most of the way from the LIRR station. You’ll need to purchase a life LIRR bicycle permit for $5 to do this.