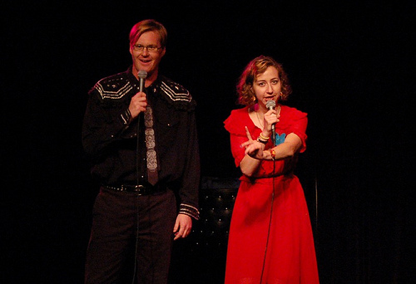 Kurt and Kristen at Hot Tub

Kristen Schaal remembers how she first got hooked on the Internet: She was walking outside, enjoying the fresh air and sun, when she stumbled upon a dark alley. A man beckoned to her, and asked if she wanted to write a letter without paper.

The joke (which is funnier when Schaal delivers it) gets a big laugh from the twentysomethings packed into a back room of Williamsburg’s Royal Oak bar for The Moon Show. Considering Schaal now appears in venues across the country and on national television—as the Senior Women’s correspondent on The Daily Show and as the voice of Louise on the animated Fox show, Bob’s Burgers—it’s pretty remarkable to see her live, for free. Yet she’s a frequent fixture on the Brooklyn comedy “circuit,” a constellation of casual, often excellent shows including the one she co-hosts with Kurt Braunohler at Littlefield, called Hot Tub.

“I do shows all over the country and I kind of use Brooklyn as my petri dish for new material—for better or worse,” says Schaal. She doesn’t change her act for audiences outside the city, but she won’t experiment the way she does in Brooklyn, where the cover for shows is next-to-nothing. “If you pay for it, then I’ll give you the gold,” she laughs. “If you didn’t pay then we’re going on a journey together.” Plus, she says, “I feel like I perform in Brooklyn so much that I want to do new stuff [here].”

“Brooklyn is a great place to build an act,” echoes Arden Myrin, who recently returned to New York after working on MADtv in L.A., then Chelsea Lately. She now has a new show with Lisa deLarios at Union Hall called Party Machine and still does Chelsea, but she prefers stand-up in Brooklyn. “There’s not that fear factor where every show secretly feels like an industry showcase.” Here, “You can be braver or try new stuff. The audiences are not super judgmental, they’re smart and savvy.”

Kurt Braunohler, Schaal’s Hot Tub partner, who also hosts a monthly late-night talk show called Night of the Living at the P.I.T. and will headline Caroline’s in June, credits Upright Citizen’s Brigade with schooling audiences here. “Right around ’98, ’99, when UCB started training people in comedy, it created this new brand of audience that was in on the joke. And then all of a sudden you had hundreds and hundreds of comedy fan gourmands that fed into a scene that already existed in New York.”

Brooklyn’s rise as a sounding board for comedians came about when downtown Manhattan stopped being the center of New York’s comedic universe. Nearly every comedian with their own local show today began doing stand-up in the East Village or the Lower East Side, either at Luna Lounge or, more commonly, Rififi.

“For years Rififi had been the epicenter of what the downtown or ‘alternative’ scene was,” says Max Silvestri, whose own show Big Terrific has drawn folks like Zach Galifianakis and Sarah Silverman over the years. “I feel like the first year I was in New York I drank there four nights a week. It was like the one place where you could count on finding a pretty good show, and good comedians hanging out.”

By the time Rififi closed in 2008, Eugene Mirman and Michael Showalter had begun their show at Union Hall (now called Pretty Good Friends, which Mirman hosts on his own). The following year Silvestri, Gabe Liedman and Jenny Slate teamed up to start Big Terrific at Sound Fix (which they’ve since moved to Cameo Gallery), Bobby Tisdale began a show in Greenpoint called Wards of Merkin, and Hannibal Buress began hosting a show on Sundays at The Knitting Factory in Williamsburg. All were living in Brooklyn by then, so it made sense to keep their shows local. Really local.

“I like the fact that it’s two blocks away from my house,” said Buress, who also writes for 30 Rock and is currently on tour. “That’s really the main thing. If the Knitting Factory moved eight blocks away, then some serious talks and negotiations might need to happen for the show to continue.”

Some feel the scene became fractured in its move to Brooklyn, but the same audiences pack shows around the borough. “I think in Williamsburg people seem vaguely younger,” says Mirman. “I did a show there and I guess there were people who were like junior copywriters and in Park Slope they’re already senior copywriters.”

For the past few years Mirman has curated an eponymous comedy festival in Brooklyn that draws some of the country’s best “alt” comedians, a term that most comics put air quotes around. It arose when mainstream comedy–think Andrew “Dice” Clay–and the mainstream club circuit collapsed in the 90s, but now that supposedly “alt” comedians like David Cross or Patton Oswalt have become huge successes, says Mirman, the term is a bit irrelevant. “Indie” might be a better word, given that the Internet, and all the blogs, viral YouTube videos, and Twitter followings it’s enabled, has radically changed the way comedians operate. “The difference now is that there are so many ways you can succeed on your own,” says Mirman.

Bobby Tisdale, for example, just started Wards of Merkin again in Greenpoint, but he only posts it on Twitter if tickets don’t sell out immediately from his email list. For him the point isn’t to make money on sales. He took a hiatus from WOM while writing for Late Night with Jimmy Fallon the past year, but was eager to get back to his own show to stay fresh and perform again. “I lost that working on Fallon.” Now, he says, “I’m doing it for the love of a silly show that the performers and audience get a kick out of.” 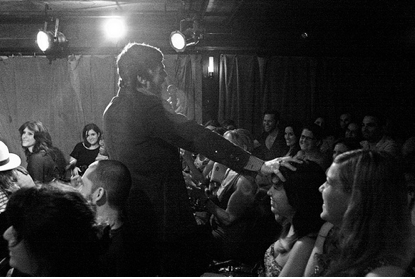 Greg Barris at Heart of Darkness

It’s not just the artists and audiences that make Brooklyn such a funny place right now, it’s the venues. Hot Tub was an on again-off again show in Manhattan until Schaal, Braunohler and producer Marianne Ways discovered how perfect Littlefield was. (“I’ve never in New York City worked with a venue that was run better than Littlefield,” Braunohler said.) And this weekend Greg Barris, a Rififi alum whose Heart of Darkness show blends live music, a bit of spirituality, and genre-bending comics like Reggie Watts, is bringing HOD back to Union Hall for a five-month residency, even though he lives on the Bowery.

Eight years into HOD, Barris isn’t particularly attached to the money it brings either, or the stage time he gets from it (though that was a motivating factor at first). “Now the show is a completely different thing. I am doing it so that I can collaborate with people who I think are highly talented in an environment that allows for any of our ideas to be possible. Not just stand-up comedy, but music, film, visual and performance art…You CAN do that in a shitty bar in the Lower East Side with everything against you, but I’d rather do it at Union Hall in Park Slope where everything and everyone is on our side and in our hearts.”