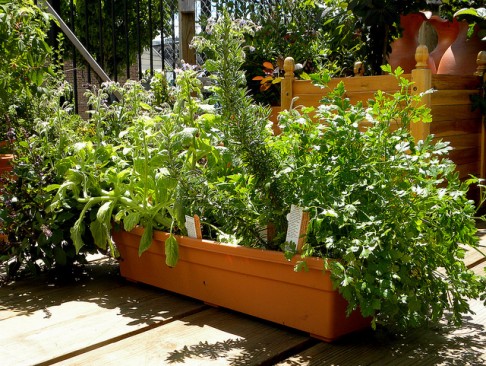 We always get short shrifted by spring in New York, but now that we have a tiny window of delightful weather, it’s time to get your green thumb on. The easiest way to play catch-up, or test out your growing skills, is with a few starter plants and a window box—especially if that box happens to be a sub-irrigated planter, or SIP.

Last year we wrote about this solution for urban gardens because they’re efficient and easy on the environment. Unlike traditional planters, SIPs are built with a reservoir at the bottom that provides constant “sips” of water to the plants’ roots, which saves an estimated 90 percent of water compared to overhead watering and requires less soil, making it lighter on rooftops (or fire escapes). Most of these “self-watering” planters are DIY deals, made using food-grade plastic containers and tubing (all of which is ultimately safer than toxic city soil—another reason to grow plants, especially edibles, in containers). There are also readymade versions now available at Lowe’s and Home Depot and online at Earthbox. 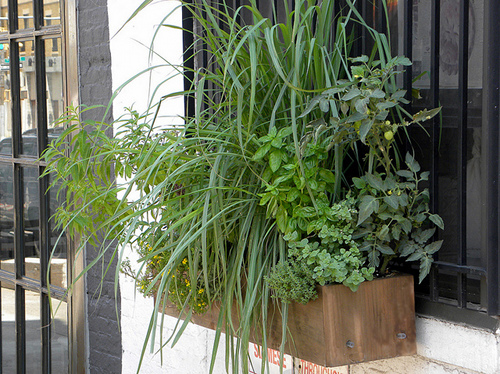 Below are some great tips on plants for your window box—be it a SIP or a traditional planter. Any garden center can set you up, and the farmers markets are filled with starter plants (try Silver Heights Farm at Union Square and Evolutionary Organics at Grand Army). Just find the right size box for your space and make sure the drainage holes are clear (always!); fill it with a good potting soil or mix like MetroMix; then blend in some fertilizer like the organic Plant-Tone or some manure (really), or the non-organic Osmocote for a season-long boost. Now for the plants… 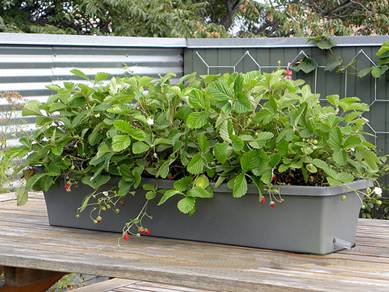 A SIP window box of strawberries atop Slippery Slope Farm

Eat What You Grow
Frieda Lim is a SIPs devotee who grows all her produce in containers, from turnips to tomatoes, on her Gowanus rooftop “Slippery Slope Farm.” In a window box, though, herbs and salad greens are the easiest edibles to harvest because they grow quickly and don’t require the depth that most vegetables need. It’s best to use starter plants for herbs, but note that dill, parsley and basil love water more than most, so you may want to plant those separately. Mixed greens and Asian greens will be ready to eat as baby lettuces in 20-30 days from seed. (But avoid spinach until the end of August, because it doesn’t fare well in heat.) For more mature, bunched greens, start picking the outer leaves of each plant when they get to be 2 to 3 inches long. Continue picking this way for 4 to 6 weeks until the plant goes to seed (also called “bolting”) and the flower spike grows up out of the center. Then pull the plant and replace it with a new seed.

Say it With Flowers
One of my favorite nurseries, Peconic River Herb Farm is actually way out on Long Island. Owner Chris Spindler likes to think of window boxes as “a living flower arrangement that lasts a long time.” If you’ve got full sun, she suggests heat-loving annuals like million bells, marigolds, and geraniums, which all don’t require a lot of water or depth. Throw in scented geraniums, lavender (or any herbs) and heliotrope for some fragrance. If you’ve got shade, try begonias for non-stop color, coleus, fuchsia, and torenia. And for variety, the staff at Chelsea Garden Center suggests mixing up the height with a tall grass or a spiky plant like a dracaena, or a cascading plant like English ivy, vinca vine or potato vine.

The Window Box for Dummies
Succulents are the lazy gardener’s best friends. According to Hannah Shaw at Jungle Design in Williamsburg, which has lots of varieties of hens and chicks and sedum, they can go indoors or out (provided they’ll be in full sun), and they’re pretty resilient. And if you are good to them, they’ll likely last you until Christmas.

Room to Grow
One last thing: Leave enough space around each plant so it can thrive. A three-inch perimeter is a safe bet, but consult with the staff at any garden shop to make sure you’re not overcrowding your plants.