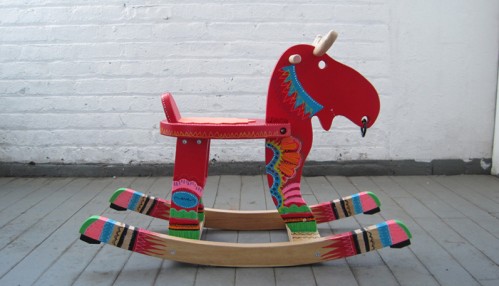 If you think of Ikea as a necessary evil (and strategically plot off hours to go) try +fliffa. The brand-new (as of Monday) Greenpoint design studio will order your blah Ikea furniture for you, transform it with colorful flourishes, and then ship it to you. Installation artist Kim Hennessy came up with the idea after she made the rocking moose on her homepage (and above) for a first birthday party gift.

“That was the first time I had done anything like furniture painting,” Hennessy emailed us, “but even before I was done with that piece I was saying to my partner ‘I think we could make a business out of this!’ and he was like “Why don’t you wait until you’ve completed ONE first.’ ” (She’s had three commissions since!)

The gist is this–you choose something on the Ikea site for Hennessy to embellish, making sure it’s in stock in the Brooklyn store, and has a surface that can easily be painted (her site has sample items to inspire you). Hennessy orders the item and aims to finish her work in two weeks time, and then repackages and ships it to you for assembly (arguably the most annoying part of Ikea, but there are assemblers for those who can’t be bothered). On her site, she estimates that much of her work is in the $100 range, including the price of the furniture, but not tax or shipping.

As for the name of her firm (which has already made waves on design blogs), it has a funny story behind it. She knew she wanted a Swedish word, so she translated a few online like “adorned,” “painted,” and “fancied” before settling on what she thought was the word for “doctored”: fliffa. A commenter on Aesthetic Outburst corrected her though, and noted that she’d misplaced the L–fiffla means doctored, not fliffa. But it was too late. A company and a domain name were born.