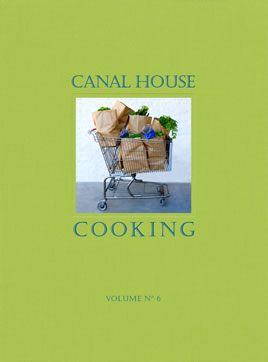 The idea of cooking through a cookbook, start to finish, had never occurred to me until the idea came up over email with my friend Shana and her friend Aimee. It would be “sort of like Julie and Julia but a different book” Aimee explained, and it would help her accomplish what she’d wanted to do for a while—“cook with one particular chef/writer”—with friends who could share notes and ultimately get together afterward for a meal based on recipes from the book.

We all love to cook so we jumped on. The actual cookbook selection took a week or two until I brought up the idea of Canal House, seasonal cookbooks that had recently begun popping up on my mom’s shelf. The series (of 6 so far) is produced by two women, Christopher Hirsheimer and Melissa Hamilton, who both worked at Saveur in its early days. (Hirsheimer was a founding editor, Hamilton the director of the test kitchen, and also the sister of Gabrielle Hamilton, who Gabrielle mentions a few times in her memoir Blood, Bones and Butter.) Each day they try new recipes for themselves and their families and ultimately collect them into these beautiful journal-like books. We decided to start with their latest volume, The Grocery Store, and would cook our way through it, in no particular order, while emailing each other about our success and failures. (Feel free to scroll to the end of this post for the next book in the club, which we’re opening to anyone who’d like to join in.)

Part of the cookbook’s appeal (like every edition of Canal House) is that it’s designed for experienced home cooks. Many recipes in Vol. 6 call for frozen vegetables and fruits you already have in your freezer (peas, berries), particularly if you’re feeding a toddler, and the instructions are very simple. Sometimes too simple. Often the intended effect of a step or technique isn’t explained, so if you’re not happy with the results, you’re left to wonder if the recipe came out right. (In the case of the Rotisserie Chicken, for instance, the roasting vegetables most definitely did not need two cups of water to keep them moist, though had the book explained that was what water was meant to do, the home cook could probably determine the right amount herself.)

Some recipes are more like ideas—throw some canned sardines, a paper-thin slice of lemon and some black pepper on a cracker (p.25) for hors d’oeuvres. Yum! And we definitely found several gems that we will be making again. Among them: The tarragon and dijon-roasted chicken wings, the asparagus bread pudding, the buttermilk pancakes, rich brownies, panko-crusted fish sticks and the preserved lemon dressing in the escarole salad. (One of the nice things about this book is putting the jar of preserved lemons in my fridge to good use.) 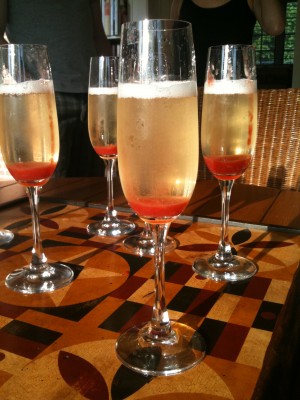 Ultimately Aimee and Shana weren’t as keen on the book as I was. For Shana, too many recipes didn’t come out right, though she “loved the concept and felt inspired by the recipes”—even though most needed adjustments. (Above are her cocktails made using the Rhubarb Syrup, p. 12.)

Aimee started off our experiment with a bad stomach flu, which made it impossible for her to even look at all the asparagus, leeks, baby artichokes, cream, cheese, and short ribs she bought for her first batch of recipe-testing. But even after recovering, she found that she just didn’t take to it. “I think that I liked some of the individual recipes, and some of your descriptions of the ones you tried sounded great. But I don’t think the book worked for me as a whole. It’s not been a great cooking month for me but I wasn’t inspired to cook up a whole lot of the recipes in one day. If I really like a cookbook I like to cook up three or four of the recipes together and somehow I had trouble tying them together.”

It would be impossible for us to all have the same experience with the book (that’s not the point really). But cooking through it together inspired us to try out new recipes, often using in-season produce and most importantly, it allowed us to talk about techniques and ingredients. We’re finally getting together on Friday for a meal made from Volume 6 (and maybe a bit of last year’s summer cookbook, since my mom found back issues on sale at the William-Sonoma outlet for $7 a pop!).

Over crab cakes, grilled duck and some other recipes TBD, we’ll start talking about the next cookbook for our club, Into the Vietnamese Kitchen, by Andrea Nguyen, a 352-page tome that will serve us well in the heat. If anyone wants to cook through it (casually!) with us, we’ve set up a listserv just for the club; join it to share your notes and read other’s. (Let us know if you want to order Nguyen’s book from a local shop–we’ll ask them to stock it.) We’ll begin recipe testing in a week, and after a month of cooking through it, we’ll all meet at foodie-friendly 61 Local for a potluck lunch drawn from the book.

And if you’re interested, below are our notes from Canal House Vol. 6. We actually asked if we could reprint a recipe but the Canal House chefs are working on a special project, and can’t release any. If you’d like to find a local store to thumb through one, The Brooklyn Kitchen carries them.

ROASTED CHICKEN WINGS, pg. 85
Aimee: It was a very simple recipe and I had to contain myself from adding things to it. One of the reasons I wanted to try cooking from cookbooks is because I can never stick to recipes. My food usually comes out pretty good but I’ve had a hunch that if I stuck to recipes it could come out even better. Well the wings were great! I felt a little weird cooking all these disembodied wings because I’ve never done that before. It was a simple marinade with olive oil, lemon juice, mustard and tarragon and you roast them for an hour. I’ll definitely make them again.

Nicole: I thought they were yummy! For some reason I had to cook them longer to crisp them up but it wasn’t a big deal. And I also thought the seasonings were good (so good I felt like doing a whole bird this way…) but I felt like amping them up a bit. I did halve the whole recipe (had only like 10 wings I think), so perhaps that was part of it.

ROSTISSERIE CHICKEN, pg 80
Nicole: I liked how this came out but felt two cups was way too much water to add to the pan of veggies below. (And it was–the veggies were still swimming in water when the chicken was done.) It’s a funny thing cooking from books because you often have to go against instinct. I even wrote the Canal House ladies to ask why they call for two cups and they said it was to keep the veggies moist as they roast, but to add just one cup next time if it was too much. So–I’m wondering if maybe my pan was just shallower than theirs… In general I’m finding that some recipes work perfectly and some are a little off or short on instructions.

ESCAROLE AND WHITE BEANS, pg 49
Shana: I thought it needed a lot more flavor and wound up adding a lot of lemon juice and a little hot sauce at the end — which helped. Also beware of overcooking it as it almost immediately starts to get soggy. Maybe it was also just too simple of a recipe….  I did make a pound of excellent white beans though for this (used the Canal House basic recipe for dried beans, p 67).

BABY ARTICHOKE AND FAVE BEAN STEW, pg 101
Aimee: I had never cooked baby artichokes before but they were in season so I figured I’d give it a try. The broth part was very tasty but the artichokes were only ok. They were a little bitter. I think I don’t love artichokes.

ANCHOVY BUTTER, pg 18
Aimee: This was yummy. Especially spread on roasted asparagus (recipe pg 40). I did add a good squeeze of lemon to it.
Shana: It was even better the next day on a cracker with some smoked salmon on top. 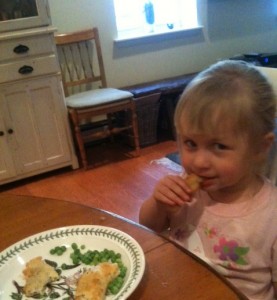 FISH STICKS (Panko-crusted), pg 75
Nicole: They were great–will definitely be making them again, although I would use a half cup flour instead of a full cup–I ended up throwing out a ton. And possibly only 2 eggs instead of 3. Maxine also liked them, and she’s never really had much fish before. (But what’s not to like, they’re fried).

MEZZI RIGATONI WITH PEAS AND RICOTTA, pg 57
Nicole: I found the directions confusing and the result a bit meh. Not sure what I would do differently–maybe add some other herb like basil, or even mint? But again, it was a simple recipe so maybe I was expecting too much from it.

RHUBARB SYRUP, pg 12
Shana: I was less than impressed. The process was easy but took over an hour and the syrup was too thick to mix easily with the prosecco so it was sort of a lump in the bottom of the glass. With heavy stirring we got the two to mix and the flavor was good but in the future I would probably just use creme de cassis or something like that. I loved the rhubarb/orange compote left over after straining out the syrup–it was sweet and fresh and good over ice cream. The book doesn’t mention what to do with this stuff but it’s actually the best part.

BROWNIES AND PANCAKES: pgs 115 and 121
Nicole: I did the brownies over the weekend and they were delicious. (I didn’t use the espresso powder either) I also did the buttermilk pancakes–best pancakes I’ve ever made. (I use Ruth’s recipe in the Gourmet cookbook, which isn’t buttermilk, but I loved how light yet thick these were).

SAVORY ASPARAGUS BREAD PUDDING, P. 103
Nicole: I thought it was delicious, and I halved that recipe just cause my pan wasn’t big enough for all it called for. I also didn’t have thick asparagus and it was fine. I still sliced some of the stalks in half. Served it warm instead of fresh out of the oven (guests were late) and it was still very good.

CHOPPED STEAK MARCHAND DE VIN, p 97
Nicole: The chopped steak (really a fancy hamburger) was good but the sauce was too rich for me. I would love to find another sauce, cause the hamburger steaks themselves were great.