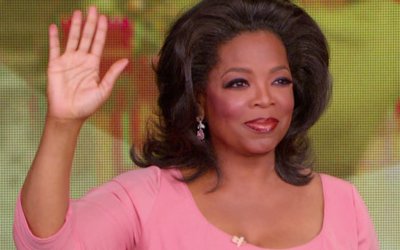 Introducing the first essay, by Orli Van Mourik, in an occasional series called “Lost & Found.” If you have an essay lying in wait on your desktop, email us. We’d like to give it a home.

People have strong feelings about Oprah. It’s not popular in my artisanal coffee slurping, scarf wielding, Times’-subscription-wall-jumping set to admit that, but that doesn’t make it any less true. There are few true Oprah agnostics. You either love her or you hate her or you’re just flat-out astonished at her audacity. And there’s no shame in that. Oprah became a cultural phenomenon before many of us had our first drink, cast our first ballot, or did our first walk of shame. When I was a latchkey kid, Oprah was the comforting voice in the background jabbering away about Autism and master cleanses, and she remained a pedantic presence in my life long after I stopped regularly watching her show. Sometimes I resented her. When her now famous Book Club started invading the arty (read: pretentious) independent bookstore I clerked at in the early aughts, it was all I could do not wrestle the cheesy schlock she was peddling out of the hands of unsuspecting customers. But as my twenty-something solipsism faded, I found my affection for her returning. Can you really fault a woman who managed to get Anna Karenina flying off the shelves in 2004?

Most people would have opined themselves into irrelevancy a couple of decades back, but not Oprah. Her influence can still be felt in virtually every corner of our lives. Her advice on topics as freewheeling as marriage counseling, money management and Third World development still inform the opinions of legions of the country’s viewers. She is an opinion maker in the old school sense of the term and people from all walks of life listen to her. Beef futures plummeted when she swore off burgers. And when it turned out that Oprah-ordained author James Frey was more of a fabulist than an outlaw, the relative veracity of memoirs became a hot topic at dinner tables across the country. Hell, even Jonathan Franzen stands up and takes note when Oprah speaks and that dude’s like the anointed one. 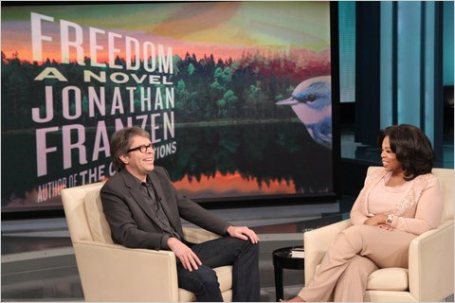 Is this a good thing? Yes. Even if you, like Franzen, happen to find Oprah’s tastes a little too, well, bourgie, she has been a force of good in America, working to bridge the ever-widening psychic divide between the rich and the poor, the white and the non white, the heartland-reared god adulators and the effete, ironic trend monkeys on the coasts. In an era when American culture is becoming increasingly atomized, when people seem hell-bent on splintering off into tinier and tinier sub-groups premised on some fleeting or just plain addle-brained affiliation with a popular cause, musical genre or dietary fad, Oprah has served as a democratizing force. Her good intentions, infectious enthusiasm, and down-home posturing helped all of us remember that we are—like it or not—more the same than different. Some of us can’t wear skinny jeans and others would rather build a bunker in the hills than vote Democrat, but we’re all participating in a shared experiment founded on the notion that we have the right to improve ourselves. (If there’s a secret to Oprah’s astronomical success, it might be her ability to tap into the bedrock hopes and fears that keep us all feeling strivey. And what, really, is more American than that?)

People with this kind of social influence are becoming something of an endangered species. With the country deeply fractured along social, political, and economic lines, our shared sense of identity is strained to the breaking point. This makes it increasingly difficult for any one person to speak to or for all of us. Once upon a time, America was full of opinion makers and public intellectuals—people from Woodrow Wilson to Eleanor Roosevelt to Walter Cronkite who helped shape our attitudes and fortify our belief in our shared cause. We saw them on the nightly news and heard them on the radio and read them on the opinion pages of our favorite newspapers. But that’s not the case anymore. There’s certainly no shortage of self-appointed experts out there, but few of them are interested in bringing us together. The loudest voices now permeating American airwaves—the Rush Limbaughs and the Glenn Becks and, yeah, let’s just go ahead and say it, the Keith Olbermanns—are far less invested in awakening our better angels than they are in grinding their respective axes down to nubs. We no longer have a Murrow for every McCarthy. So for suture, for relief, for a good long cry, many of us turned to Oprah. And now we don’t even have her.

Now I’m not asking you to agree that Oprah is a public intellectual, though I think an argument can be made that she’s been one of the twentieth century America’s savviest purveyors of cultural values. All I’m saying is that we should acknowledge her importance as a unifier. Her life in the public spotlight was spent digesting and disseminating the best high, low and mid-brow culture had to offer and then presenting it to her audience—red and blue staters alike—in a tastefully wrapped package secreted away under their seats until the big reveal. 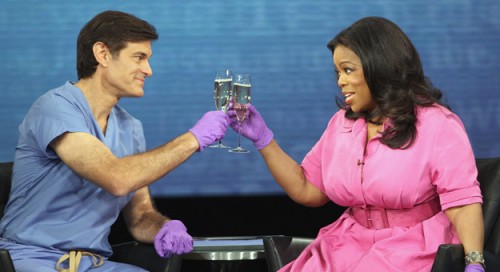 Oprah was no snob and that gave her enormously broad reach. Not only did her status blindness promote a more tolerant and inclusive attitude among her viewers, it allowed her to be truly Catholic in what she chose to highlight on the show. And her tastes we often spot on, appealing to people cutting across race and gender lines and socioeconomic brackets. Even if you’ve “never” (Come on, really? What were you in the Peace Corps? Yeah, dudes—I’m talking to you.) watched her show, there’s no way you’ve escaped her influence. You can feel Oprah’s echo everywhere. A surprising number of our country’s most popular experts have been handpicked and groomed by her, from Dr. Oz to Dr. Phil to Suzie Orman. And many of her “Favorite Things” are likely to be yours as well. (Enjoying your Kindle? Your iPad? Your Flip? Yeah, chances are she got there first.) You may dislike Oprah for lowering your cool quotient by appropriating your shiny new status symbol, but by democratizing the fetish objects of the elite she wrested these things from the paws of the few and made them accessible to the many. She did a lot to help flatten the artificial barriers we erect to distinguish the “us” from the “them.”

Don’t get me wrong, Oprah’s no saint. In addition to being a bridge-builder, she’s a preening, sanctimonious, take-no-prisoners self-promoter. In other words: the quintessential American. This may be one of the reasons she evokes such strong feelings in all of us. But if you still maintain you could care less about Oprah, don’t make the mistake of writing her off as just another talk show host. Give her the credit she’s due. She has been an icon for as long as many of us can remember—not ‘a’ household name, but the household name. Few before her have managed to spread their gospel as widely or with as much jaw-dropping success. And if Oprah has been a little too successful at pulling herself up by the proverbial bootstraps for some people’s tastes, no one can argue she hasn’t tried her damndest to yank the rest of us up after her. 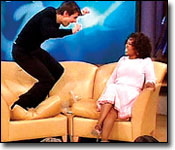 Even if you hate Oprah’s “Me first, you next” doctrine, you can’t deny her status as one of America’s most enduring cultural touchstones. Much has changed over the last three decades, but Oprah (dress size not withstanding) has remained largely the same and there’s something incredibly comforting about that—something that made a lot of us keep coming back for more. Part of me fears that May 25 marked the end of more than just The Oprah Winfrey show; it marked the beginning of the end of a type of collective cultural experience that transcends our differences and reminds us of what we share. What will we gather around now that there’s no Oprah couch to jump on?