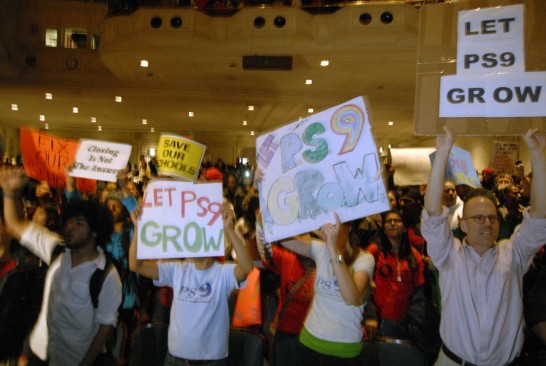 The process of getting your child into a good school is filled with angst, particularly when it comes to the notion of “space.” On the parent listservs in Brooklyn, we complain when we don’t get Pre-K placement, pass around petitions to expand our growing schools, and increasingly, at least on the lists serving parents in District 13 (which I’m on), there is talk about co-location, or sharing schools with other schools.

I didn’t pay close attention when Bloomberg and then-Schools Chancellor Joel Klein resurrected NYC’s small school movement because I didn’t have a kid then. But I do recall feeling supportive of the change—based on very little knowledge other than the notion that Bloomberg was “reforming” the school system, and that reforms were “good.”

In case you’re in need of a refresher, like me, consider this a starting point. The Bloomburg administration’s overhaul began in the early 2000s with the shutting down of 22 failing high schools that had an average graduation rate of 35 percent. They replaced them with smaller charters and public schools within the old campuses to improve performance and boost graduation rates, an effort the Bill and Melinda Gates Foundation backed with $51.2 million of their funding. Few schools were co-located back then—the Executive Director of School Governance for the Department of Education, Dr. MAK Mitchell, estimates there were less than 12, and for practical reasons, not as a reform measure.

Eight years later, there are now 801 schools that share space with at least one other school among the city’s 1600 or so public schools, on roughly 300 “campuses” in New York. Only 80 charters are currently co-located with other schools, with more to come this fall—including, quite possibly, a charter to PS 9 in Prospect Heights.

Whether this movement is benefitting kids is still being debated. Graduation rates are up—The Center for New York City Affairs at the New School calculated the graduation rates among small high schools in 2007, and found that 64% were graduating with either a local or Regents diploma. (The local diploma, considered the lesser of the two, is going to be phased out in 2012.) But the same report noted that teacher turnover at these smaller public schools is high—over 20% versus 15% at traditional high schools, and the promising attendance and graduation rates are declining. (The study has a lot more interesting findings if you have the time to read through it) And there has been great public debate over recent co-locations in Brooklyn—both Arts and Letters’ expansion in PS 20 in Fort Greene provoked public ire and the possible siting of a charter school into PS 9/MS 571 has parents and the teacher’s union embroiled in legal battles.

Last week, the Brooklyn Borough Education Policy Analyst Margaret Kelley called a few of the parents, teachers and principals in current co-located schools together to talk it out at Borough Hall, outside of the typically acrimonious settings of public hearings. That the DOE hadn’t thought to do this themselves is a missed opportunity (and a feather in Marty’s potential run for mayor cap).

Still, if this dialogue began earlier among parents, teachers and DOE officials, it might have eased tensions that are now simmering, particularly at PS 15 in Red Hook.

In 2008, PS 15 was sited with the PAVE Academy, a move they were told was temporary, but was extended to 2013 against their wishes. In the process they lost a significant amount of space for its students, 37% of whom have special needs. As PS 15 special education teacher Julie Cavanagh explains, there’s often an illusion of space at schools serving high populations of special education students. “The DOE thinks that because there are fewer kids in these schools, they need less space, but they’re not taking into account wheelchairs, sensory issues and the extra adults needed in those classrooms”–not to mention therapists who need rooms to work out of. Now, she says, the “therapist’s time is wasted looking for space.” Instead of dedicated classrooms for physical, occupational, and speech therapy, they look for space to sit in the cafeteria or outside, use the dental clinic between appointments or share a room with multiple therapists. And if there isn’t space, either because of bad weather or testing or some unforeseen event, the therapist doesn’t see children that day.

In response to hiccups like these, the city and state amended the New York Education Law and the New York State Charter School Act in 2009 and 2010 to create better guidelines for the way schools share space. Building Councils and Shared Space Committees—at charter and public school co-locations only–were mandated to discuss school calendars, staffing and equal allocations, and most importantly, the DOE had to come up with a “building usage plan” that laid out how the charter and public school would use the auditorium, gym, cafeteria, library, and classrooms equitably.

“Unfortunately, that didn’t help our school but it did help PS 9,” said Cavanagh, referring to the recent battle of PS 9/MS 571 in Prospect Heights. In early December last year, the DOE decided phase out the low-performing middle school in the building, MS 571. Two weeks later, it announced plans to locate Brooklyn East Collegiate, part of the Uncommon Schools network of charters, in its stead. Brooklyn East has only been around for a year in Crown Heights, but its sister school, Williamsburg Collegiate Charter School, a sister school to East Collegiate, is one of the ten highest-ranked middle schools in New York City, and its test scores far surpass averages in its district, city and state.

Regardless of its promise, its impending arrival was announced without warning to PS 9’s administration and parents, who would have applied to expand into a K-8 earlier had they known of the DOE’s plans in advance. (They’ve since applied, but haven’t received an official response.)

Faye Rimalovski, whose son is in kindergarten, describes increasingly crowded conditions at PS 9 because of the growing number of kids entering the school. Two years ago there were four kindergarten classes; now there are six. Her son’s lunch is at 10:30; twice a month he has gym in the auditorium. Still, Rimalovski is happy with the school and wishes it could continue, as she favors its enrichment, arts-based model, which differs from the more rigid, uniform-requiring, frequent testing model of Brooklyn East Collegiate’s. “I’m not anti-charter, I’m just opposed to this charter coming into our building,” she explained.

The power to close a school, or make any changes to a school’s use, falls to the Panel on Educational Policy, which has a majority of mayoral appointees—eight to the five individual borough appointees—and has historically greenlighted the Mayor and Schools Chancellor’s proposals. (The one time the PEP was set to vote against a proposal of Bloomberg’s in 2004, two of the mayor’s appointees were dismissed, and there hasn’t been a dissenting mayoral appointee since.)

“There’s no real opportunity to make real decisions, so at best the panel serves as a forum to raise dissenting or contrary views which is what I try to do,” says Patrick Sullivan, the Manhattan Borough President’s appointee to the PEP.

A passionate group of PS 9 parents, including some lawyers, argued against the co-location to the PEP on the grounds that the proposed building usage plan was inequitable—a quarter of the time they allotted for the PS 9 kids to use resources like the library, which the parents just spent two years rebuilding, occurred before school hours.

In February the PEP voted for the charter, so the parents took it up with the state. On March 31, the state education commissioner, David M. Steiner, annulled the PEP vote, and instructed the city to rework its plans. A week later the DOE gave PS 9 kids more library time, while the charter and, ironically MS 571, which won’t be admitting any more students until the last class graduates in 2014, got significantly less. Still, the charter was again approved by the PEP on May 18. The parents have since filed a petition with the New York State Education Department, the DOE is still considering PS 9’s proposal to expand to a middle school, and the United Federation of Teachers have included MS 571 in their lawsuit against the DOE for ordering school closings and co-locations without (purportedly) giving the failing schools the resources they were promised and needed to succeed.

(Considering that Bloomberg plans on adding more charters before his term is up, and the DOE continues to be obtuse in its co-location process, the takeaway from PS 9’s plight, perhaps, is to apply for a middle school expansion before your school gets sited to share space, because a new school could come at any time.)

In Patrick Sullivan’s opinion, the only real hope for PS 9 is if the chancellor has a change of heart, and grants them the right to expand into a K-8 school. “Rather than help successful public schools,” Sullivan said, “the DOE is more focused on giving preference to charter schools…and certainly the fact that the money behind the schools is from a lot a people the mayor knows helps the charter school agenda.”

Julie Cavanagh also believes cronyism is at play, and points out that the founder of PAVE, Spencer Robertson, received $26 million to build his charter school after his father, hedge funder Juilan Roberson donated $6.75 million to Bloomberg’s New York City Center for Charter School Excellence, and various other pet projects of Bloomberg’s. (There are other claims of the Robertson Foundation and Bloomberg’s funny business here.)

But again, charters make up just a quarter of the co-located schools in New York. When PS 20 got wind of the proposed expansion of the Urban Assembly Academy of Arts and Letters–which belongs to a network of public schools created at the advent of Bloomberg’s push for small schools, and already shares space with PS 20–parents were equally incensed. Their K-8 proposal has since been approved, and this fall their first two classes of Kindergarteners and First Graders will join PS 20’s. How they will ultimately grow together is unknown, but Ben Shuldiner, the principal at a successful, co-located high school, suggests that it often comes down to a school’s particular layout. When the failing Wingate High School in Prospect Lefferts-Gardens was phased out in 2003, his High School for Public Service was one of the first 4 smaller public high schools to move in. Together, they’ve lifted the graduation rate from Wingate’s 23 percent low point to an average in the 70s. But space, he noted, is on their side.

“Not all buildings are conducive to co-locations,” he said. “One of the things we’re lucky about is that we have four schools and four floors.”