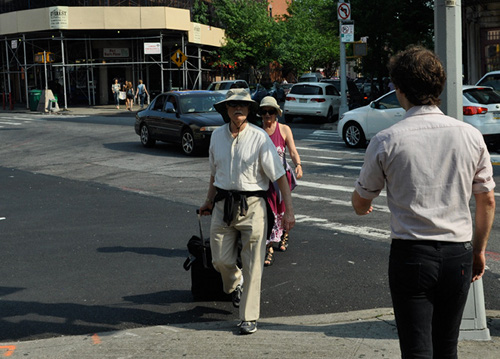 There are walking tours of every sort in New York. If you’re a punk fan or a pizza-holic, a beer nut or a biker, a tour exists for you. But if you cannot stand the idea of being led (or lectured to), then you might want to try a conceptual “walk” from Elastic City. On one of their free-form journeys, the path you take depends as much on your guide as it does on your personality and the random people you meet.

Prior to the Elastic City walk “Spontaneous Society,” for instance, our guide Jon Cotner asked the five people in our group to say friendly things to strangers we passed on the sidewalk. The point, he told us at the corner of Pacific and Court, was to inject life back onto city streets. “Face-to-face dialogue is in a tough spot right now,” he said, reading aloud from the preface he’d prepared for our walk. “It seems everyone—even those deeply concerned about this phenomenon—remains seated in their home, refreshing Gmail and Facebook accounts. Plus, infinitely more ears are plugged—clogged—with headphones.”

He then assigned us specific lines to use, lines he’d field-tested while collaborating on his diary of New York walks, Ten Walks/Two Talks. They were proven to inspire good vibes, he assured us.

So we set out to incur some good will, and put some oomph into our lackluster street encounters. My lines were the most natural of the bunch: “That looks cozy!”—said to any person pushing a stroller or wearing their baby—and “That’s a good looking dog!”—said to anyone walking their pooch. Some were more tongue-in-cheek, like “They say carrying bags is good exercise,” said to anyone hauling home a bag or two. Despite Cotner’s assurance that this line was a winner, the guy who got it used it sparingly. It had the potential, he felt, to piss off the dozens of people carrying home bags of food.

No one’s feathers were ruffled though. Many were too engrossed in their phones or locked in that I-Stop-for-No-One stare to hear us. Others were surprised by our kind words, and responded in kind. Ultimately our walk, which ended at the cinematic Brooklyn Heights Promenade at sunset, generated a few of those chance meetings that make New York feel so magical at times. Together we met a teenager taking pictures with three generations of her family before prom, and we shared this moment as a temporary gang, a cross between a flash mob and comrades.

Elastic City has been operating for a year now in New York. Its founder, artist and performer Todd Shalom, has a background in poetry, and using sounds poetically. His interests led him to the acoustic ecology movement of the 60s, started by musicians in Vancouver who led “sound walks” that explored the man-made and natural sounds of the city. Shalom started offering a few of his own sound walks in San Francisco, and upon moving back to New York, he decided to expand his repertoire and commissioned fellow artists to develop walks too.

The Elastic City walk, We and Our Shaaadows, is offered in Coney Island in July.

This season the number of Elastic City walks doubled to 20, including one that will explore our relationship with our shadows in rapidly changing Coney Island, led by Chiara Bernasconi. Shalom says he works with each artist to shape their walk’s beginning, ending, and the narrative arc between. He’s careful not to allow any that are too “fact-based.” “We give walks—not walking tours,” Shalom clarifies.

At least one other organization is entering the field this summer. Creative Walks, an offshoot of a social media site for artists called Create Culture, will offer a few experiential walks around the city, including a sound walk in Prospect Park in July led by Japanese musician Kaoru Watanabe.

As the variety of these artist-led journeys grows, it could further Shalom’s goal of establishing conceptual walks as a new genre of art. Already he’s pushing the self-proscribed limits of his walks. This weekend for New York City Pride, he’s collaborating with writer Jacob Gaboury on a walk called Findr that riffs on the smartphone app for gay men, Grindr. Instead of using the technology to spark sexual encounters, they’ll use it to make more meaningful connections. There’ll be no exact meeting place aside from “The East Village,” and it begins when participants turn on Grindr at 4pm, start walking, and by chance find each other (as all will have uploaded the Elastic City logo in place of their photos).

For once, Shalom will feel like an unwitting participant on one of his own walks. “It’s an adventure,” he said. “We’re not sure what we’re in for.”