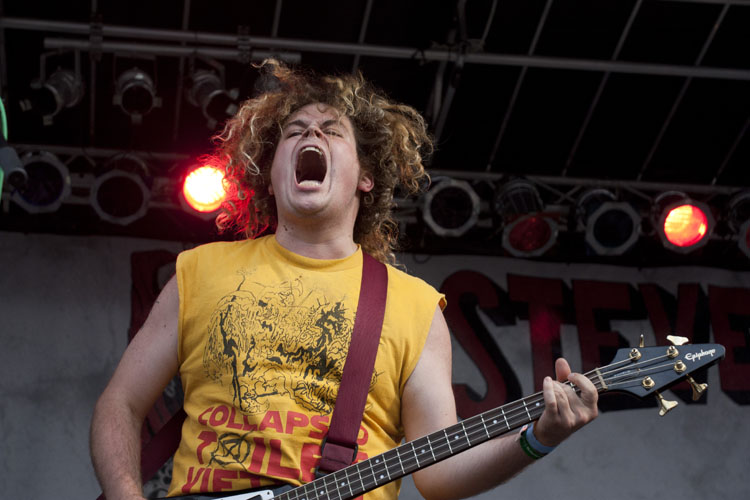 Attendees sat on blankets and jackets between sets to avoid the wet ground.

Fans found dry places to sit in every corner of the park.

The rain stopped before the music started, but clouds hung over the city all night.

Beirut’s new album “The Rip Tide” will be out this August.

Cassie Ramone is also a member of Vivian Girls.

Pope used to play with the late Jay Reatard.

Guided by Voices closed out McCarren Park on Saturday night.

Mitch Mitchell can still rock a high kick after all these years.

Ted Leo was announced as a surprise performer at Europa Saturday night; the information was released just a few hours before the show.

Leo broke a guitar string during his first song, and joked that it was a good thing not many people knew about the set.

He played a solo, guitar-and-vocal set to a modest crowd inside Europa.

Eleanor Friedburger of the Fiery Furnaces played a set of her solo material at Europa on Saturday.

Eleanor Friedburger of the Fiery Furnaces played a set of her solo material at Europa on Saturday.

With so much summer music to take in (Fort Greene Fest this weekend, folks) there’s hardly time to reflect on batch of performances before launching into the next. Let’s take a moment though, to get in the way-back machine and go all the way to last weekend and the Northside Festival..

The festival officially began Thursday, but I’d had tickets to Best Coast’s Planned Parenthood benefit for a long time, so I didn’t set out to north Brooklyn until Friday.

I decided to head to McCarren Park and see if I could get in and see Beirut, Sharon van Etten and Yellow Ostrich. It was sold out, so my back-up plan was to go see Dom at Brooklyn Bowl, if my press badge wouldn’t get me into the park. Maybe it was the threat of rain or my extreme paranoid punctuality (I really wanted to see Beirut), but I got there just as the gates were opening and got in without trouble. I had some time to kill inside, but no big deal. Then the rain started.

It got kind of ugly for a few minutes. What had been mostly mist and sprinkles for some time became a downpour–always fun when you’re holding an expensive camera. The crowd suddenly blossomed into a veritable forest of umbrellas, so many that it would have been impossible to see the bands had any started playing yet. The crowd got soaked–and I overheard one person loudly complain that the rain was watering down her beer and several feigning enthusiastic joy over the double rainbow that appeared in the sky–but stopped almost as suddenly as it had begun, so the first act came out.

Yellow Ostrich was first. They played their set of mid-tempo indie rock, commenting that it was the first time they’d ever played a show big enough to have security guards facing the other way. They said some of their songs were new, though they were all new to me. The group just signed to Barsuk Records and will be re-releasing their album “The Mistress” in August. Second on stage was Sharon van Etten. I was already feeling the strain of the poor choice in footwear I had made, so I listened to her set while sitting to the side of the park. She acknowledged that her parents had made the trip from New Jersey to watch her before launching into a song she knows they love, and otherwise played a solid set of songs, some of which were new.

Beirut played a strong hour-long set that included several tracks from the upcoming album The Rip Tide. Some of the songs surfaced online awhile ago, so they were already familiar to the crowd. The full band show closed with “Gulag Orkestar” before Zach Condon came out solo to play “The Penalty” as an encore.

Saturday was another day for McCarren Park. Maybe that means I’m not adventurous, but that’s where the acts I wanted to see were playing. The afternoon show opened with The Babies, a group featuring Vivian Girls’ Cassie Ramone and Woods’ Kevin Morby. Surf music was the name of the game at this show, and it started with the openers. They were followed by Florida act Surfer Blood, who similarly played a set of beachy rock and played some tunes that are going to be on their next release. Next up were Wavves, a group I knew I liked but hadn’t listened to a whole lot. They powered through their noise-pop-surf-punk show and then we waited for Guided by Voices. GBV, with their so-called classic line-up, smoked, drank and rocked their way through a long set.

In between acts I checked Twitter on my phone and learned that Ted Leo would be performing a surprise set at Europa that night. After weighing my musical options–legends I probably should see versus someone I actively listen to and enjoy–I decided to leave midway through GBV’s show and make it over in time to see Leo. So I didn’t see the entire two hour, multiple-encore Guided by Voices set, but what I did see of their show was fantastic.

I knew I would make it to Europa with time to spare, but I wasn’t sure how many other people had seen the same tweet and would make the same decision, so I wanted to secure my entry to the “secret” show. No problem. I got upstairs in time to see Ida, who played right before Ted Leo came on. He played a solid solo set, pausing after his first song to change a broken guitar string and crack a joke that it was good so few people knew about the show, performing old songs and new ones, like “The Little Smug Supper Club,” which he recently performed for Room 205. He also mentioned this weekend was the tenth anniversary of “Tyranny of Distance,” one of his albums with The Pharmacists. Leo was followed by Eleanor Friedburger of the Fiery Furnaces, who played a set of solo material. Her first album is coming out this summer.

Sunday I would have liked to have gone to see Deer Tick perform as Deervana at Brooklyn Bowl, but I woke up too sick to head back out. I’m blaming dehydration and an overdose of secondhand smoke. I hear it was an epic show, though, so I hope anyone who got to see it had a good time.