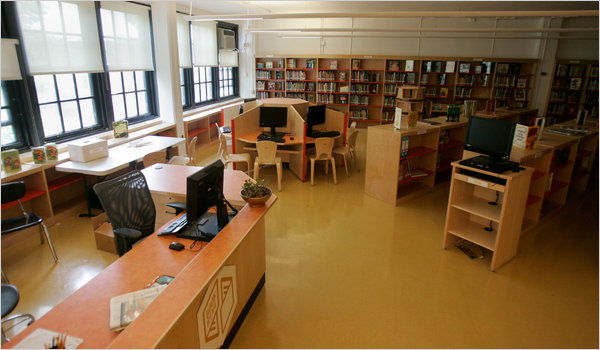 In the Times on Saturday, an article on the diminishing numbers of New York City school librarians due to budget cuts illustrated its point using the library at PS 9, the Prospect Heights elementary school that is slated to share space with a charter school this fall. Already the proposed co-location, which we wrote about last week, is disrupting the way its students use building.

Last November, PS 9 and MS 571 parents unveiled a new library that spans two full-size classrooms, has over 4,000 books and nine new computers–funded through $450,000 in grants from Letitia James and Marty Markowitz. A month later the Department of Education announced that Brooklyn East Collegiate Charter School would move into the school–Building K009 at 80 Underhill Ave.–and replace the current low-performing public middle school, MS 571. As a result, enrollment promptly dropped at the middle school, which is not accepting any more students, and will only stay open until the 2011-12 seventh graders graduate in 2013. And because the middle school receives funding based upon enrollment, it couldn’t justify the cost of a librarian, nor could the elementary school shoulder a librarian’s salary on its own, so now the library is used primarily as a reading room.

This is just one of the many fallouts of the planned co-location, which PS 9 parents have fought from the get-go, and are still fighting. For them, expanding PS 9 from a Pre-Kindergarten through 5th Grade to a Pre-Kindergarten through 8th Grade school makes much more sense than bringing in a charter, especially since the DOE has presented them with a building usage plan that scheduled a portion of PS 9 students access to the school’s resources–like the $450,000 library–before the school day even begins. In March they received an encouraging affirmation that the DOE’s actions were unjust, when the state annulled the vote for the charter by the Panel for Educational Policy—essentially the mayor’s rubber stamp in approving changes to NYC schools as Michael Winerip pointed out in the New York Times.

But the PEP approved the co-location again on May 18, after the DOE barely revised its Building Usage Plan for PS 9 and Brooklyn East Collegiate Charter School, a school that was initially blocked from being co-located to a school in Brownsville because of a lawsuit, before it found a temporary home in Crown Heights, where it can remain for at least one more year.

So PS 9 parents–with the help of an attorney among them–filed a petition last week with the New York State Department of Education to annul the PEP’s vote yet again. The document points out the flawed reasoning in moving BECCS to building K009.

Among the many oppositions to the co-location listed in the petition:

-BECCS serves the fifth through eighth grades, which conflicts with the DOE’s own efforts to standardize its elementary schools to be K-5 and its middle schools to be 6-8.

-BECCS doesn’t accept incoming 6th grade students (as middle schools are supposed to in New York City). This means that a PS 9 student can’t graduate from its own elementary school—they have to enter BECCS in the 5th grade if they want to stay in the same building–and even then, they can only enter through a lottery admissions process, aka luck. In fact, in its admissions lottery for this fall, BECCS did not even favor District 13 families.

-Having two fifth grades in the same building consumes classroom resources and reduces the actual number of middle school seats both schools will be able to offer. If PS 9 were to expand into a Pre-K-8, on the other hand, it could offer 138 more middle school seats than the co-located schools could.

-The number of zoned students enrolled for Kindergarten this fall jumped 52% from last year. As PS 9 enrollment continues to grow, it will need 19 additional classrooms by 2015-16 to meet projected demand, a figure the DOE has failed to account for in its revised Building Usage Plan and Environmental Impact Statement in April.

-Allowing PS 9 to expand would preserve its 54 Pre-Kindergarten seats, which are always in high demand.

-The DOE said it would address the possible expansion of PS 9 in a revised Building Usage Plan, but has not done so to date.

The DOE has 10 days to make their argument to the State, then the parents have two more days to rebut them, and finally the State will make its decision. However this plays out, the way the parents of PS 9 have organized their fight against the city is an impressive blueprint to follow.