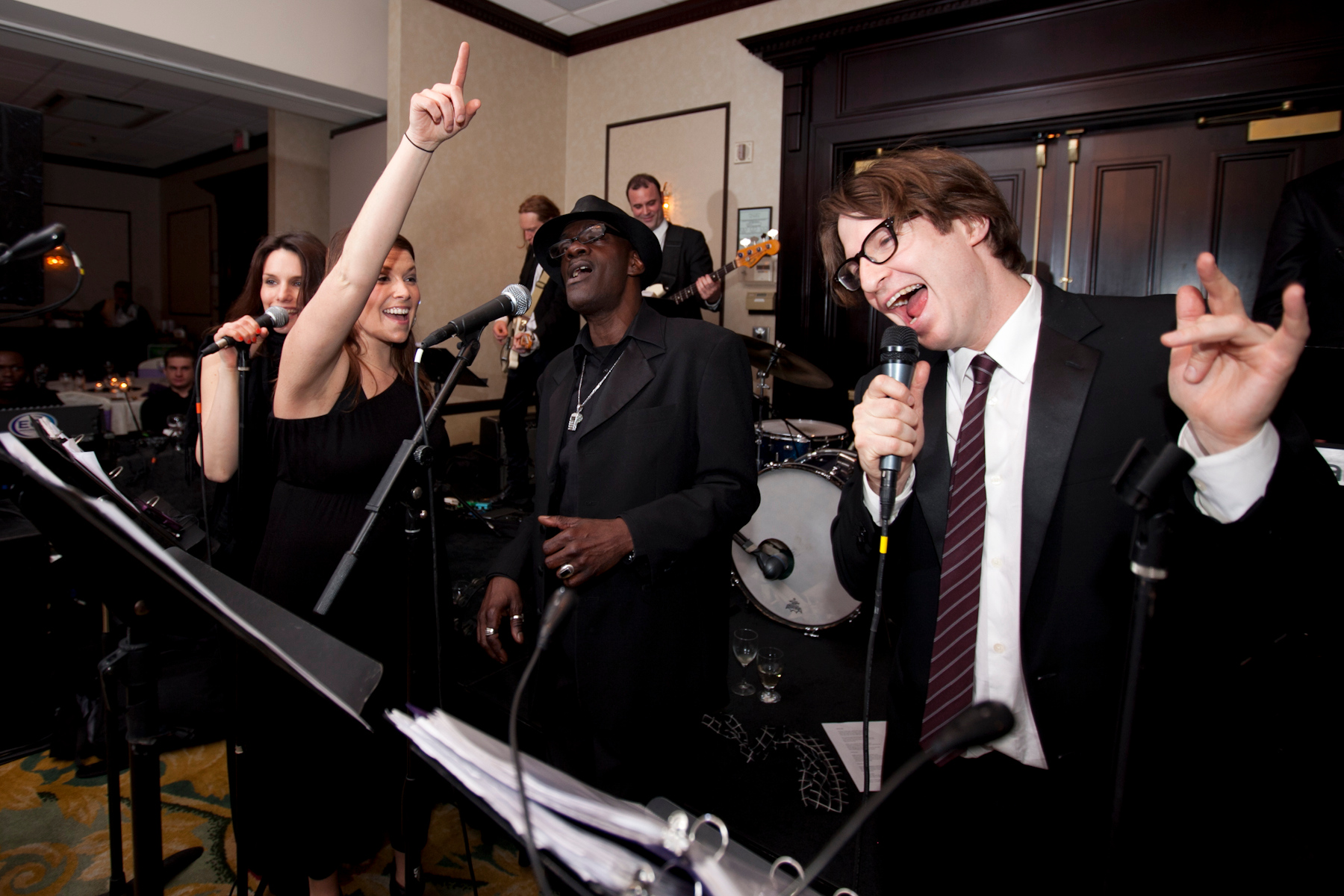 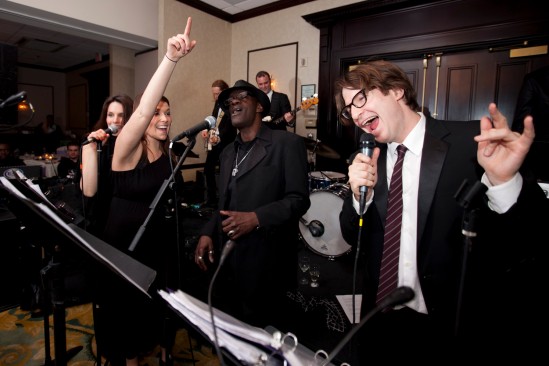 The Engagements in action. Photo by Christopher Lane.

The soul, new wave and 80s cover band The Engagements is one of our favorite wedding bands. Each time they’ve taken the stage at Wedding Crashers, they’ve mesmerized the crowd with their dance hits by everyone from Michael Jackson to The Cure to The Eurythmics (check out their version of “Sweet Dreams” below. Here, Aaron the drummer shares his tips on when to book a wedding band, songs you should consider taking off your “do-not-play” list, and the benefits of a 10-piece band.

How did The Engagements come together–had all the members been playing weddings separately, and you joined forces, or were you friends who decided to play weddings?

We are a bunch of professional musician friends who have worked together in all kinds of situations for years. We came together to learn a few sets of 80’s covers for a friend’s wedding some years back. It turned out to be super fun, and the band sounded surprisingly good, considering we had like one rehearsal or something. It was a great night, and we were recommended for other weddings, and it’s just sort of taken on a life of its own since then.

You’re a 10-piece band. What are the benefits of having so large an ensemble for a wedding?
The major benefit to having a 10-piece is simply being able to authentically go in a multitude of musical directions.  I should note that we can get down to a 7-piece when the situation calls for it. At our core, we’re a traditional rhythm section of bass, drums, guitar, and keyboards, with another keyboardist who also sings lead a lot of the time, 3 other “lead” vocalists and 2 horns–sax and trumpet. Also, we switch around on instruments and double on different parts for certain songs. We’re able to cover a lot of ground with our set-up.

What are all the musical genres you’ll play? What are your favorites?

Genre-wise we cover a lot of rock, pop, rare soul, Motown, and alternative dance music.  For weddings we play songs that could be described as rare classics –  songs people recognize, but aren’t necessarily being played by 50 other wedding bands at the same time on a Saturday evening.   One unique thing about us is we concentrate on music that was created for a live band to play.  That sort of breaks down to music from the 80s and before.  Rock, pop, soul, Motown etc.

Our favorite things to play are the ones that haven’t been butchered a thousand times by wedding cover bands.  We love taking on The Smiths, Blondie, A Flock Of Seagulls, David Bowie, The Kinks, Talking Heads… just fun songs.  We like getting into the soul and funk material too.  Dance music is our thing.  The fact that we have the experience to navigate the first dance, and the announcements, and do ceremony and cocktail hour music is what puts us square in the wedding band category.  But really, this is a dance party band.

Right now, we’re adding some things to our songlist that many people might know from later hip-hop samples, only we’re playing the original song. “Bustin Loose” by Chuck Brown, for example, which people know from “Hot In Herre” by Nelly.  That’s a high energy thing, during which we can feed off the crowd for a moment.

Also, I’ve learned that for better or for worse, “Living On A Prayer” and “Don’t Stop Believing” are like alternative National Anthems or something, and it can, in fact, be a surprisingly beautiful thing to see 175 friends & family, sweaty and drunk, playing air guitar and singing along at the top of their lungs.  Some of our clients put that song on the “do-not-play” list, but for those couples who want us to go there, while it doesn’t fall in the “non-typical” wedding song category, we do actually enjoy playing those ones.

What are your go-to songs that get people dancing? What’s your most requested first dance song?

For getting people up on the dance floor, we have a large cache of go-tos. Off the top of my head, “I Melt With You” (Modern English), “Just Like Heaven” (The Cure), any Michael Jackson (we just added “P.Y.T.”), “Don’t Forget About Me” (Simple Minds)…

We do our own version of “If Not For You” (Bob Dylan), with the horns and everything, which I often recommend to clients for the first dance. That’s probably our #1 most requested first dance song.  “That’s Where It’s At” (Sam Cooke) is a favorite as well. I have to say for some reason we (thankfully) attract creative, music-loving clients, so we rarely end up doing the same old first dance songs. This past weekend we did a request of the Stevie Wonder song “I Believe (When I Fall In Love)” for the first dance. Starts off a bit somber, but ends up joyful. 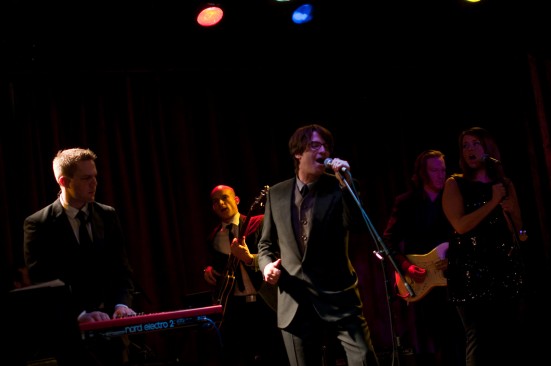 The Engagements at Wedding Crashers. Photo by Daniel Krieger

What types of weddings do you enjoy playing—destination, local? What makes a wedding special in your mind?

It’s certainly more expensive to take our operation on the road, or out of the country, but we savor the opportunities when they come up. We’re the rare wedding band that is comprised of friends who enjoy playing together, so we always give the client all we’ve got, no matter where the event is.

What makes a wedding special?  Well, it sounds cheesy, but it’s really about the connection between the couple and their family and friends. One of the most memorable weddings we played was in a backyard, and all of the food was done by the family. One of their special request dance songs was “Total Eclipse of The Heart.” (Totally worked for them.) This was a couple that knew their friends and family wanted to celebrate and not be forced into a stiff schedule. It’s certainly not about how much money you spend!  At that wedding, our fee may have taken up the majority of their budget, but music was important to them.

We’ve done weddings of most every size and budget. The ones that are the most memorable, from our perspective, are the ones that aren’t micro-managed or over-planned. The key to planning a wedding, in my mind, is leaving room for people to relax. Having something scheduled every 10 minutes on the timeline tends to gum up the flow of the event, in my opinion. Ultimately, what’s special is your particular collection of people, so give them time to interact, and time to dance!

What should couples keep in mind when hiring a wedding band? And how many months out should they book to make sure they get the band they want?

I think hiring a band can seem daunting to most couples. It’s perfectly understandable. Most of them have never done it before, and musicians can seem so cool that it’s intimidating. Joking. But seriously, I’d say don’t be afraid to address all of your fears with the band before hiring them. An experienced band will guide you through the process and won’t make you feel crazy for asking them questions.

It sounds nuts, but if your date is a Saturday in June or September, you’ll want to start 9 to 12 months in advance, at least. Those are the hot zones. We’ve booked weddings on shorter notice for sure, but most couples book us well in advance. If music is important to you, and you want it to be a pillar of your party, don’t wait. I hate telling people that, because it’s entirely possible that you can find some diamond-in-the-rough amazing group, especially in NYC, the week of your wedding. It’s just a gamble.

Are there certain venues that don’t work well for live music, either because of the acoustics or dance floor? Any particular venues that work really well?

There are certain rooms and venues that naturally sound great. In honor of Brooklyn Based, I’ll name some Brooklyn spots: ReBar, in Dumbo, is one. The Bell House folks know how to make things sound great in their room. We’re doing one at The Green Building this year, so I’m looking forward to hearing things in that lovely space. I haven’t been to Brooklyn Winery yet, but we’re doing one there this year, and I’ve heard nothing but great things. The truth is, a good band will be able to adapt to even the most acoustically terrifying venues.

To those planning their wedding:  A good band always trumps a DJ. Hire great vendors, work with them closely to customize your day, and then let go and trust them to do their thing. There are vendors out there who are completely experienced and professional, but are purposefully not dialed into the wedding-industrial complex. Seek them out, and you’ll get the personal taste and customized attention you deserve.

For more info about The Engagements, check out their site»