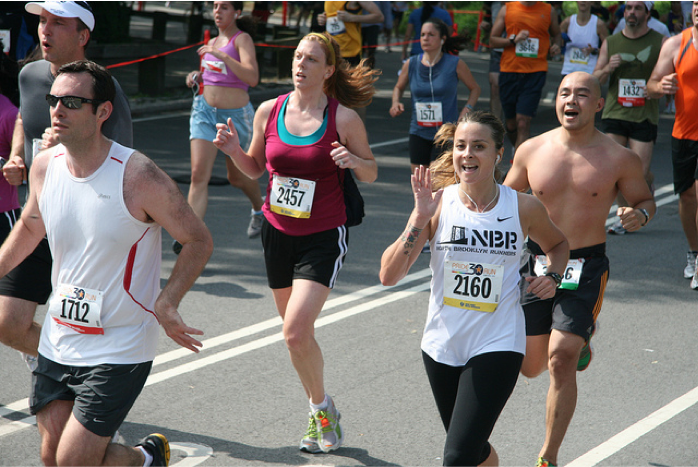 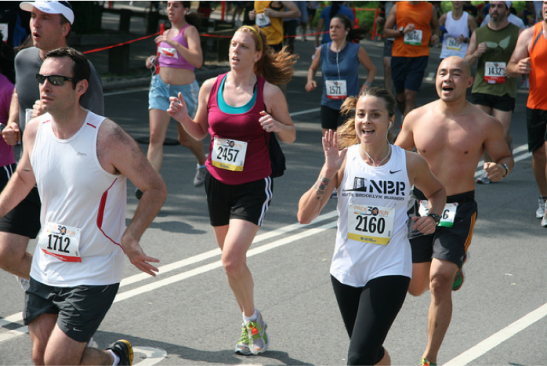 A North Brooklyn Runner in mid-stride.

It’s officially summer, and the Prospect Park pathways are once again filled with runners starting to rev up for the New York City Marathon or just getting some off-the-treadmill exercise. The price of gym membership continues to skyrocket, and jogging is not only free–it’s environmentally sustainable and works all your core muscle groups, so you can eat that dulce de leche doughnut at the Brooklyn Flea guilt-free. On the flip side, it’s hard to find motivation to get out there and pound the pavement alone when you could be at the Fourth Avenue Immersion with friends. The easy solution? At little to no cost, five running clubs in Brooklyn provide a built-in support system to achieve your personal fitness goal, whether it’s pacing at a 10-minute mile or training for your tenth marathon.

All the clubs listed here are free, (race fees not included), unless otherwise noted. Click through to their sites for schedules of workouts, runs, track days and bar nights.

For the race-minded, and for those looking for intense workouts, Brooklyn Road Runners Club offers group runs four times a week. “The variation is pretty great,” says team leader John Shostrom, “from people following very specific programs to those who want to run just for fun,” but a lot of BRRC members have completed at least one marathon. The club focuses primarily on easy-pace runs but mixes in speedwork in a non-competitive way for those who are interested.

“We’re mostly competing with ourselves, trying to meet a goal or standard set internally rather than trying to beat a teammate in a workout.” Shostrom explains that training with a group can alleviate the difficulty of pushing yourself and committing to a regular schedule individually, and rivalry among group members isn’t necessary to success. “In races it’s different, at least for me—that’s where you really go all-out in a competitive fashion.” BRCC also hosts team dinners, softball games, and pasta parties for club members to socialize and trade training tips. An annual membership costs $20 per member, $25 for families and $30 for a two-year membership.

If you’re looking for a similar club with fewer marathoners and more structure, the Prospect Park Track Club focuses on training in what board and committee member Michael Ring calls a “casually competitive” atmosphere. Registration costs $25 but provides access to guest speakers, a newsletter subscription, volunteer opportunities, and swim clinics in addition to the group runs, speedwork, and social events. PPTC has a more race-oriented schedule than BRCC accompanied by a more robust social schedule, including bowling, ice skating, and regular brunches. “You don’t need a club to run,” Ring explains. “But if you want to talk about running, joining a club is a good start. Also if you want to talk while you’re running, a club is a good place to find a running partner.”

In addition to several longer races throughout the year, the PPTC hosts a classic six-race speed series all summer long. Ring says though he initially joined to get bus transportation to the NYC Marathon–the same transportation he now organizes–he quickly became an integral part of the PPTC community. “We all encourage each other to get faster or run further, but we never make comparisons. Nobody is slow.” 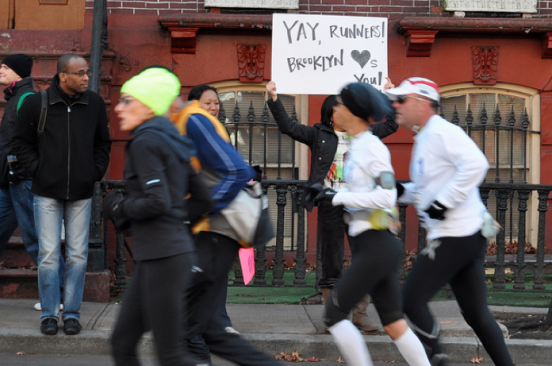 If you’re still shying away from commitment, note that convenience is a primary factor for the North Brooklyn Runners and South Brooklyn Running Club. North Brooklyn Runners has a 9:10pm, Night Owl run Monday evenings to beat the heat, and the crowds. Think you’re a beginner? They have group runs for that, too, as part of schedule that features multiple pace options almost every day of the week. The membership form takes note of any health issues you have as well as your running goals to complete the personalized running experience.

Ben Carter, one of the founders of the South Brooklyn Running Club, says, “Once you start running it’s never as bad as you feared, so getting out the door can be the hardest part,” citing the “awesome team shirts” as the best reason to make your way to Carroll Park (at the corner of Court and President) a few times a week. Each member runs at his or her own pace, and many run for fun while others train for events ranging from one to 26 miles. Just about a year old, the club focuses on motivating one another. “I, and many others in our club, will run with anyone at any pace if it means getting someone running,” says Carter.

Like North Brooklyn Runners, SBRC has runs scheduled for different intensities every day of the week and post-workout drinking to boot. The best part? Hitting up the Red Hook food trucks on the way.

Located on 7th Avenue between Garfield Place and Carroll Street, Jack Rabbit Sports Training Programs offer a more expensive but completely personalized training experience. In discussing what sets training programs apart from running clubs, Doug Oldiges, program director, explains that Jack Rabbit does goal-oriented training for specific races. “It’s a great motivator to come and be held accountable. When you’re left to run on your own, it’s so easy to work late or go to happy hour.”

To prevent this, Jack Rabbit ensures that you work with one coach throughout your entire training, with whom you develop a relationship. “The coach gets to know you and is able to see how you’re developing to provide feedback that’s really relevant to you,” says Oldiges. The programs meet twice weekly and assign homework in the interim as part of the online component to keep you inspired throughout the week. Jack Rabbit purchases spots for their participants in local races accessible by public transportation, and training programs run in Prospect Park departing from the Grand Army plaza entrance. Cost ranges from about $100-$300.