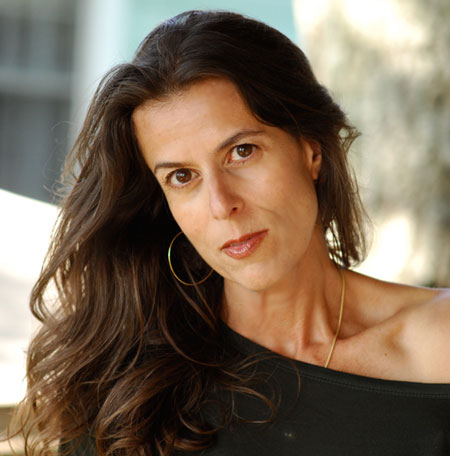 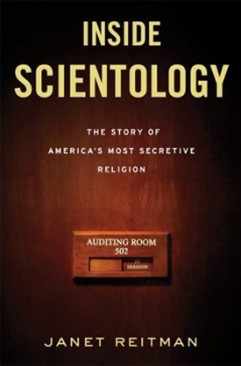 Last week we sat down with Janet Reitman at Building on Bond to chat about her new book, Inside Scientology: The Story of America’s Most Secretive Religion, which comes out today.

Reitman and Bode, her enormous French sheepdog dog, are regulars–the investigative journalist logged many hours at the café while writing the book. Her research into Scientology started in 2005, for an article for Rolling Stone, where she is a contributing editor. As we talked, friends and neighbors, human and canine alike, stopped to say hello, offer an ear-scratch or a sniff, and congratulate Reitman on the book. Here’s a portion of our conversation about the past, present and future of Scientology, which has been edited for length and clarity. If that leaves you wanting more, Reitman will read Wednesday, July 6 at Bookcourt, at 7pm.

I came away from the book thinking that the internet had killed Scientology, in part because secrets and the control of information is well nigh impossible these days.

I think without the internet they would have found a way to appeal to young people. But you can’t do it with all that information out there. My argument is that you have to change. I’m not saying in my book, or in any interview I do, or in my off-the-record conversations with my friends or anyone else that this is not a valid, quote-unquote, religion. Because I’ve met too many people for whom this is the only religion they know and they believe in it and I’m not going to tell them that it’s bullshit. I’m not. I could say the very same thing about Christianity, I could say the very same thing about the Mormon church. Everybody is entitled to their own belief and as long as it’s not hurting anyone, go for it.

What I do take issue with is the overwhelming control that Scientology has exerted over its followers, partially to maintain this level of secrecy because it was founded in a very paranoid time and that paranoia is written into the very essence of this organization.

You write in the book that numbers have fallen since a peak in the mid-80s, what happened?

They began to lose their own members in part because of alterations in the tech [Tech refers to courses of auditing and other work that Scientologists would have to pay for on the path to spiritual enlightenment–or the Bridge to Total Freedom in Scientologist vocabulary], and in part because the were becoming increasingly punitive–during the 1980s in particular, the church purged a lot of people from the ranks. But they also lacked a good marketing plan. Their marketing plan began to be about celebrities…this was very much a strategy where they were going to get out there and this is what people were going to respond to because they respond to celebrities.

What David Miscavige [L. Ron Hubbard’s successor and the current leader of Scientology] didn’t understand was that people don’t join religious movements, they don’t join a church, because a famous person is a member. All of this coincided by they way with Scientology beginning to really define itself as a religion. So it wasn’t just self-help–if it ever was simply that, it was definitely not that now. Do you want to join a religion that Tom Cruise is a member of? He used to be a Catholic, does that make me want to be a Catholic? It’s very superficial.

L. Ron Hubbard tapped into a much deeper need. He really tapped into a zeitgeist. I wouldn’t say the zeitgeist of the 90s and the 2000s was celebrities. I think in some ways yes, but that’s not the actual deep emotional need. Hubbard tapped into the deep emotional need that people had to either find psychological counseling or overcome some of their traumas, or find spiritual peace–he understood that the 50s was an era of anxiety and that people needed to find a way to handle their anxiety, and that the 60s was an era of revolt and rebellion and alternative thinking and that people needed an outlet for that and that the 70s and 80s was this new quest for self betterment and real, personal enrichment to basically put you on the top in the Reagan years, and he figured that one out.

What were the 90s and the 2000s? A very sarcastic, cynical period. I’m the classic Gen-Xer, we’re very ironic and whatever. Scientology would not have sold well to me–it didn’t sell well to me. 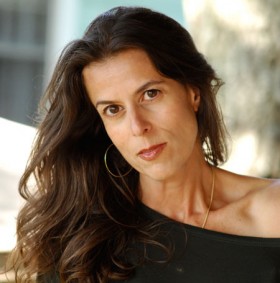 Inside Scientology is written in a very conversational style but you’re also presenting an incredible amount of information. How did you approach the question of tone when you sat down to write?

So how did you do that, taking into account the whole, big clam, exploding aliens in space part of Scientology? [Hubbard’s origin myth of the human race involves both mollusks and aliens.]

The thing is, that stuff is so not really what Scientology is about on a day to day level. The clam thing, that comes from a specific book called The History of Man, that Hubbard wrote that is one of his more, “out there,” shall we say, books … I never interviewed anyone who talked much about the clam incident or mollusk incident and the same thing with Xenu. The Xenu myth in particular a very specific thing that most Scientologists don’t know and never will because you have to get to a specific level, called “OT 3”, which is expensive and demanding of your time and money and devotion. What I tried to do was look at Scientology from the perspective of someone who knows nothing … My background is as a foreign correspondent and that’s how I decided to look at it, as a foreign culture.

What’s your relationship to the Church of Scientology? You write in the book about intimidation tactics the church has used against journalists, government employees and others, has that happened to you?

I’m not commenting about the book stuff but I will tell you that with the article–I don’t really separate the book and the research I did for that article, as the process seamlessly went from one phase to the next, and certainly I don’t distinguish between the article adn the book with regard to church officials, whose insights gleaned while doing that article helped inform much of the book. When I was reporting the article there were some phone calls and visits to Rolling Stone from church officials, very higher level church officials,who were basically trying to discredit me, and when that didn’t work, sort of trying to peer over the shoulder of my editors, so to speak. They made a lot of calls, “Just seeing how it’s going,” that kind of thing.

But it pretty much stopped at that. With the article and the book, everything has been very well vetted and extremely well fact-checked. What I will say is, it was a goal of mine to make this most objective, but also meticulously researched, and I have something like 45 pages of endnotes. You don’t produce a book on a group that is known for its litigious history without having serious documentation; everything in this book has been triple checked, essentially. There’s not a single account I haven’t had independently confirmed by two or three sources. It’s very well documented. That’s my answer, the book’s on the shelf. Not a lot of books on Scientology have been on the shelf, ever.

This is interview was edited and condensed for length and clarity.