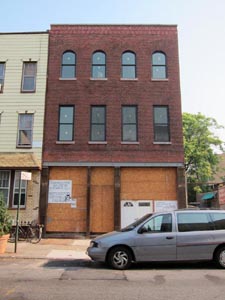 By the end of this summer Brooklynites will again be theorizing about the future of progressive media and watching rare Jon Moritsugu films in a new, 2,000-square-foot storefront that arts organizations Triple Canopy, The Public School New York, and Light Industry have purchased signed a five-year lease on in Greenpoint.

As in their previous location in downtown Brooklyn, architects Gabriel Fries-Briggs and Rachel Himmelfarb–creators of the 2009 pop-up putt-putt, The Putting Lot–have divided the raw space into a screening room, magazine office, media library and classroom area, all of which flow into one another.

The groups coexist—“best roommates ever,” said Light Industry’s Ed Halter—and support one another with projects and events. They foresee even more collaboration when the center opens in September at 155 Freeman Street, where they plan to host “performances, classes, artist talks, readings, panels, workshops, concerts, and weekly film screenings,” according to their Kickstarter campaign, which ends July 10. They’re trying to reach a goal of $40,000 to cover lighting, painting, construction costs, and “new, (much more comfortable) seating” for their events. 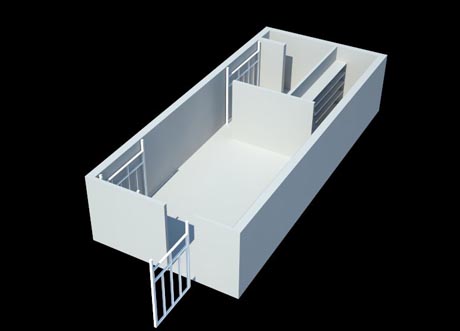 A rendering of the art center's interior

The idea of similarly situated organizations coming together for mutual support is not a new one. And in the current economic climate, sharing space is a necessary habit. But how did an online magazine, a cinema group, and an open source school become connected?

“The first point of contact was between myself and Sam Frank of Triple Canopy–he asked me to write something for them when they were first beginning, which eventually became an essay on [filmmaker] Jeff Krulik,” said Halter. “After that, people from each organization attended each others’ events, and when we found this opportunity to take a space, we decided to join [together].”

“Such exchanges,” said Alexander Provan, one of Triple Canopy’s founding editors, “allows us the unique opportunity to reenact New York circa 1977–or at least provide a space for writers and artists to get together in one place.”

One of Halter’s favorite events was called Impossible Geometries. “Each of the three groups hosted events for an evening, which ended up as a very late night dance party.”

Sarah Resnick of The Public School New York describes the three groups as “more roommates than collaborators,” though she acknowledged that the programming is complementary.

One of the first Public School series, “The Page and The Screen: Siting Text in the Early 21st Century,” included a discussion between Dan Visel and Bob Stein of The Institute for the Future of the Book. The talk was transcribed and published as an article in Triple Canopy.

As for the new Greenpoint location, it fit their need for space. Or as Resnick said, “You’d be surprised how difficult it is to find an unobstructed rectangle with 11-foot ceilings!” It’s also an area with a built-in arts audience, yet lacks the kinds of arts venues found in Williamsburg and Bushwick.

Said Halter, “We feel we can really bring something to the community that isn’t already there.”

“All three organizations are marked by a sort of radical eclectism,” said Light Industry’s Thomas Beard. “So there’s a lot of exciting potential for clever projects, sharing resources and cultivating different audiences.”

Because it is, in fact, a storefront, there’s a drop-on-by quality to the whole endeavor. “Hopefully,” said Provan, “people will come by, read, watch some things and then maybe just stay and hang out.”