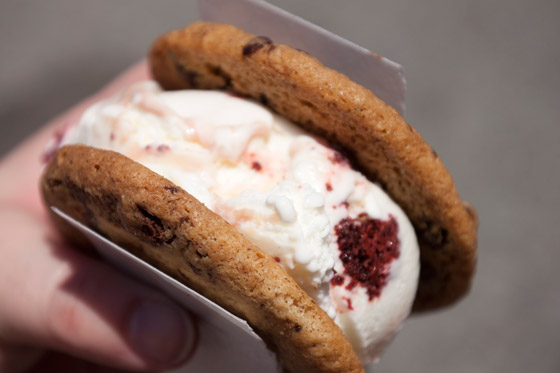 Rickshaw dumpling truck was one of the trucks offering savory food.

Despite the heat, people were lined up for warm slices from The Eddie’s Pizza Truck.

Shady spots were at a premium as people looked for places to eat.

Frosty desserts were in high demand, as the long line at Kelvin Natural Slush Comany demonstrates.

Many of the customers at Mud Truck were ordering iced coffee drinks.

On Sunday, a swarm of food vendors descended on Grand Army Plaza–along with many hungry Brooklynites. There were trucks to satisfy every palate, from dumplings to falafel to desserts, parked in the hot sun. With temperatures soaring, it’s no surprise that some of the longest lines were in front of the trucks selling frozen treats–Van Leeuwan Ice Cream, Joyride, Coolhaus and Kelvin Natural Slush Co.

The Food Truck Rally is held in Grand Army Plaza on the third Sunday of every month June through October. The next event will be August 21.