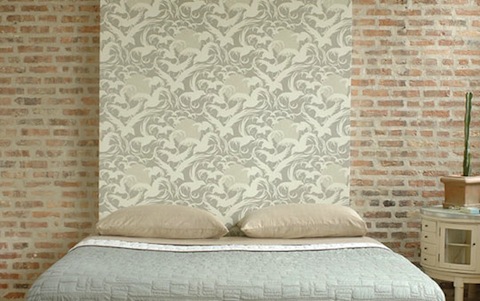 Proof that bigger isn’t always better: An accent wall can be a smart, sparing use of wallpaper.

If you’re looking to change the mood of a room, a fresh coat of paint is usually the first option that springs to mind for the most makeover for your money, and the easiest to undo if you’re renting.  Wallpaper though, makes an even more dramatic statement, and it’s not nearly as intimidating as it seems. (Especially if you win our wallpaper contest with The Sweeten and Flavor Paper. Details below!)

Why even bother messing with wallpaper when you can just break out the rollers and trays? “It can add a bit of history to your home since it has more longevity than paint,” says Brooklyn wallpaper designer Aimée Wilder. “It also makes a statement about the time period if it is left up for years. It’s not something you just paint over.”

Jon Sherman of Flavor Paper, whose showroom is located in Boerum Hill, explains that unlike the more subtle effect of paint, wallpaper can transport you to an entirely fresh mindset. “Choice of color changes moods, but large-scale patterns are impossible to ignore.” Often, a pattern will trigger a memory or an emotion. Artist and design blogger Nicole Cohen of Sketch42 says she decorated her daughter’s bedroom using Cole & Son’s hummingbird wallpaper because “it reminded me of my childhood bedroom growing up…You just can’t get the same feeling with a paint.”

And even though wallpaper is a more serious investment, there are work-arounds, and some designers, like Ryan Cox of Filthy Home, have made it easier for DIY types to install it themselves.

“I think a lot of people would like wallpaper, but feel like it’s a challenging obstacle to put it on your wall,” he explains. In response, Cox decided to only make self-adhesive wallpaper in easy-to-apply panels instead of rolls.

Even if you go the traditional route of unpasted paper and hiring an installer, we have some pointers from the experts on how to make your first foray into wallpaper simpler, cheaper and stress-free.

If You Can’t Go Pro, Go Self-Adhesive: When it comes to hanging wallpaper, the professional paperhanger knows best. “The intricacies and technique needed to successfully install the most popular papers increase fivefold when you throw in the graphics, different print mediums, delicate surfaces and the need to trim the goods,” says installer Alan Rada of DecoRada. But you can go with a self-adhesive paper if you want to cut costs on an installer. Ryan Cox of Filthy Home says his self-adhesive papers are not impossible to redo if placed imperfectly the first time. “You have a few months, almost a year where you can peel it off.” If left on longer, however, it’s possible that it will be just as hard to remove as traditional paper. Another solution is Flavor Paper’s new temporary fabric option for its digitally printed papers. Called Mobile Flavor, it has low tack but sufficient adhesive on the back that can be reused up to 200 times. “You can throw it up on the wall, roll it back up, and take it down,” says Jon Sherman. 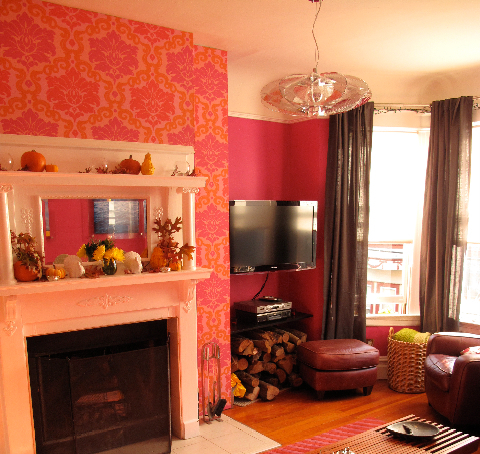 Wallpaper that isn’t glued to the wall!

Don’t Glue it the Wall: For a completely non-permanent solution, Brooklyn designer Aimée Wilder says this is the trick to wallpapering an apartment if you’re a renter. For temporary installations, she’s taken artist’s tape, rolled it in a circle so it’s tacky on all sides, flattened the edges, and applied it to the back of sheets of wallpaper. “It has definitely held up for at least a month without any problems removing the paper from the wall or the tape from the paper,” she said. A friend, freelance photographer Kelly Marshall, used another, longer-lasting technique–she hired a prop designer to cut and paste wallpaper to thin sheets of balsa wood. He then used small, discreet nails to nail the papered balsa to the walls of her San Francisco rental. It still required the same amount of precision of a professional installation, but she will ultimately be able remove it with more ease than if she had papered the walls. If this still seems like too much of a time and effort commitment, refer to the next tip.

Buy by the Sheet: Katie Deedy of Grow House Grow has a fix for those of us who are broke in Brooklyn—wallpaper by the sheet. “One day I realized I didn’t know if I could even afford my wallpaper,” she says. Each of her 27”x36” sheets are still very high quality but the smaller quantity cuts the cost down to $48 per sheet, versus $180 for a roll. The sheets then do double-duty as an art piece and a wall covering. “You can frame it and take it with you,” says Deedy.

Choose One Wall: Papering one wall doesn’t just reign in costs. Aimée Wilder recommends selecting one wall to paper because it changes the mood of a room without altering it completely. Accent walls also provide an opportunity to try out that super mod pattern straight out of A Clockwork Orange or some ornate scrolling that might feel too formal otherwise. Flavor Paper’s digital prints, like the winter landscape of “Soft Silence,” can transform one wall of a room into an entirely different location. “We’ve always done our storytelling through pattern and color,” says Sherman, “but now it’s also photographic.”

Hang it Yourself: Designer Barb Blair of Knack, who recently posted a how-to on wallpapering on Design*Sponge, believes that anyone with patience can hang paper themselves. She recommends beginning with a windowless wall so there are no “pesky corners” to cut around, and above all, follow directions! ” I think one of the key things to remember when applying wallpaper is to follow the directions for that specific wallpaper and brand specifically. Each wallpaper company is so different in how they recommend wallpaper be applied, so it is a good rule of thumb to read the directions and follow carefully.” She often uses pre-pasted paper, although cautions that it often requires additional paste.

Invest in an Installer: If you’re ready to paper one or more walls, and you do have the budget for an installer, hire one. Says Deedy, “Hanging wallpaper is kind of an art. Hire a professional. It’s a huge investment in your home, so it should be hung perfectly.” Jon Sherman recommends turning to the National Guild of Professional Paperhangers, a trusted source in the interior design community that provides the names of several installers based on location (see our guide for more recommendations). Some designers, like Ryan Cox, will hang their own wallpaper upon request. “Just don’t be surprised if I show up in boots and jean cutoff shorts.”

You can expect to pay an installer between $450 to $900 to paper one wall or a small area, not including the paper, which varies in price. (For an idea, a 12 foot long by 8 foot high wall would require six rolls of hand-screened Flavor Paper, which starts at $150 a roll.) Even better, you can enter to win Flavor Paper and a professional, J Marc Wallcovering, to hang it for free as part of our Home School contest series with The Sweeten. This is our third contest with the Brooklyn-based home improvement site, which allows you to post your remodeling projects and receive estimates from their hand-picked network of contractors and designers. Once you enter–the contest ends August 2!–check out our guide to Brooklyn wallpaper designers and paperhangers on the blog.