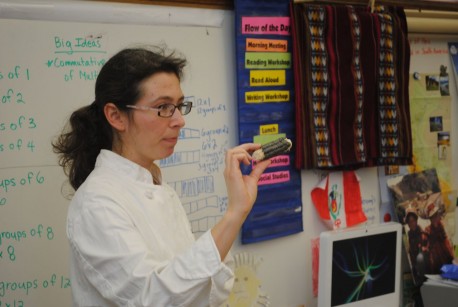 It’s 9:00 am during the last week of school at P.S. 230 in Kensington and the kids are even more excited than usual.

“Did you try mine?, Did you try mine?” is a phrase that bounces back and forth among them. Sitting on tables are platters of coconut-filled rice dumplings from Bangladesh, latkes from Israel, and tsimis, a Lithuanian stew with meat, sweet potatoes, and prunes. There are also pierogi, apricot and chocolate hamantaschen, and Moroccan chicken. It’s an end-of-year potluck feast, with foods representing the different cultural backgrounds in the class. The potluck is more than just a party; it’s the culmination of this year’s culinary curriculum.

Chef and mom Karin Endy responded to Michelle Obama’s call for chefs to be more involved in schools by adopting her children’s school. Endy, a graduate of the French Culinary Institute, integrated food-related workshops in her kids’ classrooms. For Ms. O’Neill’s third grade class, this meant that social studies units on Japan, Ghana, and Peru were supplemented by appropriate culinary lessons–and foods like homemade tofu, baobab lemonade, groundnut stew, and a purple corn drink called chicha morada. Endy also kept literacy goals in mind and tried to get the students to describe and write about the food they tasted in more specific terms than just “good” or “bad.”

Endy came into O’Neill’s class about once a month for two-hour sessions. She brought in kitchen equipment she owned and bought the ingredients for the class; the school cafeteria provided cutting boards. While the workshops centered around Endy’s demonstrations at the front of the class, the kids assisted with prep work, using plastic knives when chopping.

Throughout the year, the third-graders learned about how the geographic area of a country influences its diet. Learning about the Incas of Peru led to understanding early methods of food preservation, like how to keep potatoes in the winter.

“Basically, you cut open the potatoes and you freeze them, then stomp on them,” says Endy. “It breaks the cell walls down and gets moisture out. You do this several times and you end up with freeze-dried potatoes, the stuff that goes into Pringles.”

As part of their Peru unit, the class made a dish called papas ocopas, a recipe Endy picked because it was fairly authentic, dating back to the time of the conquistadors, and because it could be made with limited equipment. The dish is served like a salad and has potatoes, hard-boiled eggs and a chili-peanut sauce. (Click here for the recipe.) 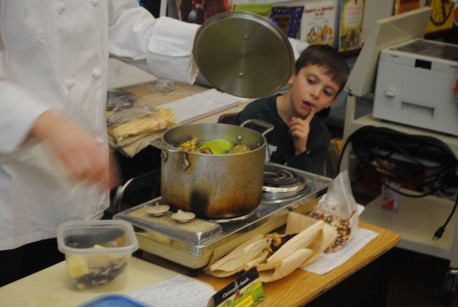 Jeremy Sonnabend, 8, looks on as his mother prepares chicha morada, a Peruvian drink made of boiled purple corn.

Endy made sure the class was thinking about the connection the recipe had to its roots. “I have a blender, I have a stove, I have a pot. What would they [the Incas] have done?” she asked them.

Lisa Panzera, a parent present at the end-of-the-year potluck, said that her own daughter Fiamma Cochrane’s reaction to the curriculum was positive.

“I cook a lot…but this, because it is coming from school, really engaged her and has got her to try completely different foods, which is fabulous,” says Panzera.

Describing the vibe in the class, Endy says that it was definitely, “cool to taste, uncool to not.”

Fiamma, 9, is sitting nearby, close to her contribution to the potluck–creampuff snakes.

“I thought that cream puffs were so ordinary; I thought I would make a new type and try to make them squiggly and put chocolate over them,” she says.

One of Fiamma’s favorite lessons this year was making tofu.

“You mash up beans with some other things and then it’s called okara and you shape it into tofu and then you can put soy sauce over it and do whatever you want with it,” she says.

Endy says discovering okara was one of the more surprising moments for her in the class as well. Once the soybeans are cooked in water, a byproduct is pulpy leftover bits called okara, which amounts to a high protein lunch that you can season with a little ginger, garlic, or soy sauce.

“They came back for second or third helping of okara. Who knew?” she says.

Moisan was also excited about eating fufu, part of their lesson on Ghana.

“It looked like mashed potatoes in a bowl, except it was cornmeal!”

Endy says when they made their instant fufu, they also talked about how the authentic version was made, by women using a long stick and a bowl to pound the roots for hours until they were a texture that could be used.

Throughout the school year, O’Neill and Endy tried to reinforce some themes, like getting the students to think about how geography and climate can limit what food are available. To underscore this, they decided to take the class to a winter farmer’s market.

They took the subway to Borough Hall, then gathered the kids around to talk to one of the three farmers there. When they asked him questions about what was growing, Endy says they were shocked by his reply.

“He told them ‘There’s nothing growing on my farm right now; it’s February. We’ve got four feet of snow up where I am.’ And the kids, their eyes got really big. ‘So, where are all these apples from?'” That exchange led to a discussion about cold storage and refrigeration.

Ultimately, Endy helped the children become more aware of the time and care that goes into cooking. At the potluck, Elijah Pluchino, 8, describes the preparation of his Sicilian scaccia, a tomato and cheese pie.

“I just really want to say, it’s a lot of work. You have to rise it two times, so you have to get one full package of yeast,” says Pulchino. “I didn’t help at all. My mom barely had some time to rest.”

For teacher Lauren O’Neill, the workshops highlighted the benefits of getting parents involved in the classroom.

“It’s great for parents to share their own passions with kids in the classroom. When it works out, it’s a really nice thing,” she says.

Endy hopes to continue bringing food lessons to P.S. 230 in innovative ways. Though she contributed her own money to create the curriculum, she points to the Culinary Trust’s Chefs Move to School Grant as a way to support similar work. Going forward Endy wants parents to get together and think of new ways to get kids to eat more of the healthy foods already available in school lunches. She also hopes to bring Days of Taste to the school–a curriculum developed by the American Institute of Wine and Food to teach kids about food.

For Endy, the best part of the experience was the kids’ openness and excitement.

“I would get to the classroom while they were at lunch and unpack, and they would line up outside and say, ‘Yay, cooking!’”