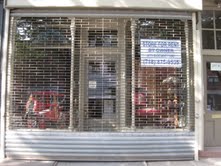 What would you put on Atlantic between Hoyt and Bond?

For this edition of Fill This Space, we chose a storefront that didn’t seem to have an exact number–but it was between numbers 377 and 377 A–on Atlantic between Bond and Hoyt. As it was, the space was occupied by a still fully-stocked antique shop with big teddy bear stuffed in a Red Baron replica plane in the front, but since it was closed and dark with a big “For Rent” sign in the window, it seemed as good a spot as any to try and fill.

Atlantic Avenue in Boerum Hill, by the Hoyt-Schermerhorn G, A and C stop is a totally unique and vibrant alcove that’s loaded with furniture stores, upscale boutiques and restaurants with specialty cuisines. With Mile End Deli just around the corner, a new Shake Shack, and a specialty bakery, this section of Atlantic, at first glance, seemed to have everything that many Brooklyn neighborhoods lack food wise.

Compared to my neighborhood in East Williamsburg, which lacks good buffalo wings, soup and sweets among other goods and services,  it seemed to me like this corner of the world had everything–a seafood restaurant, a burrito joint, and a falafel place were all within a block of our to-be-filled space. Which is why I was shocked to hear from the first three people that I spoke to that the one thing missing around here, was perhaps the ubiquitous of New York City businesses.

Chris Anderson, lawyer: “Seriously within six blocks of here, you cannot get a slice a pizza. You literally have to walk down to Court Street to get a slice. This area needs a regular pizzeria.”

Kevin Campbell, consultant: “The food selection around here is excellent. You know what we really need, a sports bar! There’s a bar a few blocks down but it’s not a real sports bar.”

Erin Shultz, teacher: “I’m tired of going into a place where they try to sell you a 10-ounce Budweiser for $20. All the places around here either don’t have good atmosphere, or the bartenders suck or the prices are too high. This area just needs a regular neighborhood bar.”

Oliver Keane, filmmaker: “I mean we’ve got a lot. We’ve got a butcher, a fishmonger, a bakery. We’ve got fantastic sweets, right down there is the best bakery in the city. Shake Shack is about to open. The one thing we could use is a really good delicatessen. If you want some ham, this is not the best place to buy ham.”

It seems that for Boerum Hill residents, it’s not so much about what businesses are selling (other than ham), it’s about the character and vibe of the business. For instance, while there are plenty of places to eat on that stretch of Atlantic Ave. ,two locals pointed out there’s no outdoor eating. In fact, most restaurants near our space had a deliberate “grab and go” feel to them. The passersby I spoke with expressed their desire to sit out on Atlantic Ave on a nice Sunday morning while drinking a coffee and reading the paper.

And, while there are plenty of bars in the area, several people expressed a desire for a “regular bar” on Atlantic.

Not everyone wanted to make things less fancy, though. Two groups of women expressed to me the need for a cheese shop in the area, “Like Stinky on Smith Street,” they explained. And two guys mentioned that a nice wine bar could be a good addition to the neighborhood.

But, as far as food goes, the people of Boerum Hill have spoken, and they all want a decent by-the-slice pizza place.