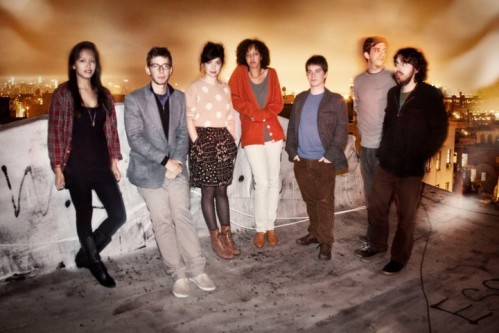 Every month or so, Brooklyn Based unveils an exclusive, new song by a Brooklyn band, recorded at Nadim Issa’s state-of-the-art recording studio in Gowanus, Let ‘Em In Music. This month’s mp3, “Down Right,” is by Ava Luna.

Here, Hernandez gives a behind-the-scenes glimpse at the making of this post’s track.

What’s the story behind the song you recorded at Let Em In?

The working title is “Down Right,” which refers to a move in Mortal Kombat. The song isn’t done yet. This is a very rough draft, so forgive us! We’ll be including the finished version on our new album.

Songs take absolutely forever to write. It’s a constant balancing act of all the components. I usually bring in ideas, and we spend hours as a group hammering out details. Usually the finished song ends up morphing so much that it doesn’t sound much like the first sketches.

What did it take to find your band’s signature sound?

It started with a concept that I basically just thought was hilarious–a menacing synthesizer paired with vocal harmonies–with the question, “How far can we push this?” But as we’ve played together as a group, we’ve hopefully managed to develop it from something conceptual to something more organic. Over time, the “grammar” becomes more intuitive.

Is your doo-woppy sound music influenced by any particular old-school greats? If you could pick another decade to play as a band in, which would you choose?

It’s not so much about the doo-wop or classic soul sound; I just consider those gestures and tropes a part of my own personal history and musical DNA (though I admit Al Green has been a huge influence). I’m really more interested in finding ways to question or deconstruct them, like a self-examination. I’d love to be a band in the late 70s or early 80s. I feel like there were a lot of people everywhere during that era who were trying to subvert, rather violently, their own musical heritages.

What current musical trends are you loving, and which do you wish would go away?

I used to be vitriolic about musical trends, but I’ve learned to accept them as part of nature. As far as I’m concerned, if a band is cunning enough to hop on a good trend, then more power to them! I have noticed that in the past six months, there have been more and more bands drawing from soul influences, and plenty of articles to go along with it. Whatever!

What do you like and dislike about being a Brooklyn band?

I wouldn’t really know–I’ve never lived anywhere else, much less been in a band anywhere else. I guess I don’t much like the long winters.

What are the band’s plans through the rest of 2011?

We’re slowly but surely working on a new album that’ll be released on Infinite Best Recordings. After that, we’ll see?