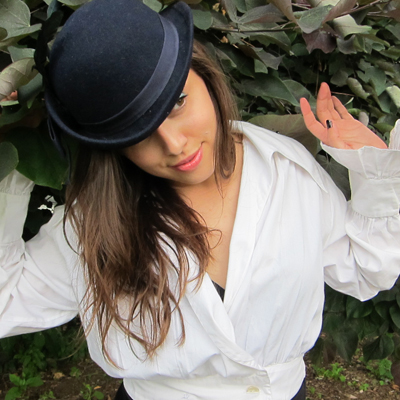 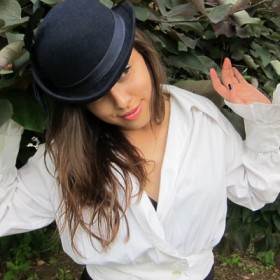 New York City has a way of drawing in strange characters. Christen Cappello is no exception. The Bushwick-based singer songwriter, who prefers the name C.C., creates electronic, folk pop beats that could also be described as inter-dimensional, since C.C. claims to come from another world called Vellae. “Lots of things happen there that would be described here as ‘supernatural,'” she explains. “We just call it natural.” I spoke with her about origins and her newly released E.P., “Portraits of Vellae.”

Tell me a little bit about your story. How did you come to land on Earth from Vellae?
Origin stories are so passé, no? Plus it’s a bit materialistic to brag about one’s mode of transport. Besides…I can’t remember exactly, things are fuzzy. Crash landings will do that to a girl.

Have you always been a chanteuse or have you developed your singing over time?
The Body of Vellae elected me Chantuese at 10 years of age. In Vellae it’s believed that these things are predestined. That said, any craft must be developed, predestined or not. So both are true.

How would you describe your music?
Folk songs from another world. A synthesized vacation dedicated to take you from your reality to mine.

What is your music-making process like? Do you attribute your creativity to Vellae?
Although creativity is Vellae’s greatest export…it is the currency of the universe. I certainly attribute my inspiration to Vellae.

Some notable craftsmen connected to this record are Josh Ascalon (Producer/Mixer) and Nicholas D’Agostino (Drummer). They are talented earth beings, indeed.

I absolutely love the track “Into the Night”–it has such a fun beat, I haven’t been able to stop listening to it. What track are you happiest with?
Thank you! What I have found interesting is that there hasn’t been one song that virtually everyone likes most, which I think is great because I worked very hard to make every song stand on its own. This E.P. was not made to appeal to any one group, age range, review site, or radio station—it was made with the intention of painting a picture as true as I saw it.

What’s your fan base like? Are they interested in otherworldly experiences?
At this point I think it would be accurate to say I have a “Friend Base”–a wonderful network of people who are extremely supportive.