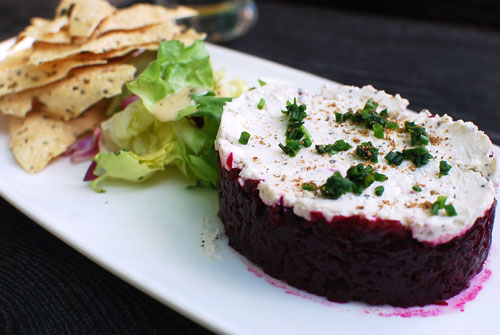 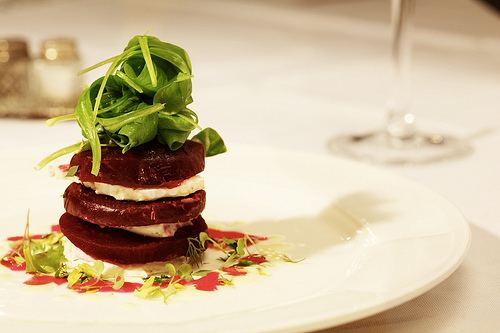 An artful beet salad at Rye

Dark red slivers, tender and juicy, staining fresh greens and bleeding into creamy white cheese–this is the essence of a refreshing beet salad. The formula is simple and its popularity shows no signs of waning, even though the beet and goat cheese combo has become a menu cliche, much like the molten chocolate cake of the 80s and 90s.

“From a chef’s perspective they’ve got to be one of the most derided of all menu items, right up there with endive salad with blue cheese and walnuts,” says chef Tom Kearney of The Farm on Adderley. “I suppose the prevalence of beet salads on menus can come to symbolize for a chef an unadventurous diner’s adherence to the familiar.”

It persists as an option, though, because diners and chefs still love it.

“It’s probably the biggest seller we have as far as salads go,” said Charles Brassard, executive chef at Cafe Colette in Williamsburg. Brassard’s beet salad is drizzled with a light buttermilk dressing, then topped with walnuts. He excludes the standard beet salad addition of cheese.

“It’s not that I’m against cheese, but it’s a dish where you can taste the beets and taste what’s there,” he said, describing their earthy flavor as beautiful and not to be messed with.

At Five Leaves in Greenpoint, chef Ken Addington serves a hefty bowl of golden and red beets with a tangy goat yogurt. Slices of orange make the dish even sweeter and pair well with the slight bitterness of the arugula. His customers, he said, have come to expect it and he will gladly defend it.

“Just because something is popular doesn’t mean it loses its value. I can see how people might find it as over saturated, but it’s a fun dish people respond well to,” Addington said. He grew up loving beets and says he continues to eat them at least once a week. His wife is a beet enthusiast as well.

“My wife has beets for breakfast every day, with seaweed, flax seeds and hard boiled eggs. It’s adorable,” he says.

Tamer Hamawi, owner of Colonie in Brooklyn Heights, has noticed that this hearty root vegetable (which he calls beetroot in his native Australia) is quite popular with the ladies. “We have a funny saying, ‘bitches love beets,’” Hamawi said while sitting by the bar at Colonie in the early afternoon. One of the hosts overheard and quickly said, “You can’t have them print that.” “Really?” Hamawi asked with a look of concern. “Why not? Is that not right to say?”

Regardless of whether its ladies or dudes who most enjoy them, Colonie’s chef, Brad McDonald, says beets are popular because of their visual resemblance to meat and their steak-like quality. “When you eat them it feels substantial,” he said. People also dig their natural sweetness–which, incidentally, is relatively new. By 1821 new research in plant breeding helped produced a higher sugar content in beets, explained Author Neil L. Pennington in his book Sugar, A User’s Guide to Sucrose. And many chefs will tell you it’s the sweets that sell. “Sweetness is the only flavor profile people crave,” says McDonald. “Especially in America which has a history of pouring sugar on everything.”

The beet salad has taken various iterations over time. In the 60s, beets usually came pickled with horseradish as a pairing for fish. The popular warm chevre with salad greens combo, a California import, started popping up on New York City menus circa 1992 and has been going strong since. But chefs constantly try to reinvent this predictable pairing.

Addington has had various versions of the beet salad on his restaurants’ menus for 12 years. His current version was inspired by his Russian-Jewish upbringing eating borscht, with the use of goat yogurt as a substitute for sour cream.

McDonald became executive chef at Colonie a few weeks ago. As a result the restaurant’s beet salad has gone through a major renovation. What used to be a medley of golden and red beets, whole hazelnuts, thin slices of orange and ricotta salata has been replaced with a red beet-only salad with fresh sour cherries from the farmer’s market, peppery mizuna leaves and crushed hazelnuts.

Said McDonald, “You always see beets on menus, but they don’t really shine. No one has risen beets to an a-ha moment.” Though many still try.

Last fall at Le Grand Fooding, where the theme of the night was New York versus San Francisco, chef David Chang went experimental with the traditional beet salad saying it was something you see on every menu in San Francisco. Obviously New York is guilty of the same.

Chang’s take was inspired by the granola yogurt cups you find at Korean markets. Crushed walnuts at the bottom represented the granola, and a goat cheese mousse mimicked the yogurt. The cup was then topped with a couple crispy beet slivers.

The Farm on Adderley’s Tom Kearney remembers the taunt fondly. “I thought he did a great parody of a California Cuisine mainstay.”

Daring to be different: The Beet Tartare at Strong Place in Cobble Hill

At Strong Place in Cobble Hill, chef Kenneth Tufo’s popular beet salad is experimental in design without intruding on the beets’ natural flavors. It’s called “beet tartare” because of its resemblance to beef tartare. The beets are finely diced and presented with a smear of creamy feta. Crisp papadums are placed beside it to dig into the salty-sweet combination. In the kitchen they jokingly call the dish beet nachos.

“We have to dance the line of giving something familiar, but in a new way,” said Tufo.