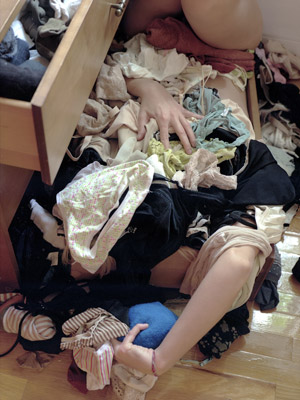 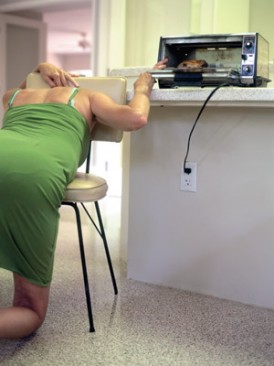 Photos from one of August’s postcards, by Lee Materazzi

Despite near constant cultural rumbles about print being a dying medium, a glut of indie zines still exist in this so-called era of demise. Just ask sisters Anna and Tess Knoebel, who spent several years conjuring up a monthly micro-magazine published on postcards. The result, Abe’s Penny, is the perfect marriage of the sisters’ complementary skill sets in literature and art in a very concise little package.

“We didn’t want to overwhelm people with another thing they had to read,” says Tess.

Subscribers to Abe’s Penny receive four postcards each month, collecting the four parts of each monthly issue in segments. Dripping content drop by drop to the reader base, a single artist produces all four of the images for any issue, and a single writer produces a brief stream of text that unfolds in four parts. Annual subscriptions cost $82 for 12 issues (48 postcards).

“We’re proud of the fact that these artists get a whole month to themselves,” says Anna. “It’s a lot of time for people to spend with the same artist and writer.”

Inspired by frequent childhood road trips, the postcard format seemed obvious to the Knoebels. The project’s title comes from their shared fascination with penny presses, which made the written word accessible in newspaper form to a huge number of people in the 19th century. Over time, the concept has taken on even more meaning, drawing a parallel between the minimalism of their publication and the smallest form of currency. More than two years since launching their first issue, the concept has proved successful.

“I love the minimalism of the whole project–the single image and a piece of text,” said longtime subscriber Jon Mildenberg. “It’s very modern and that the same time, it’s a throwback medium.”

In June, Abe’s Penny celebrated its collaboration with photographer Spencer Tunick at the End of Century art space, where collaborator Alina Simone performed the song she had written in conjunction with Tunick’s solitary nude images, a deeply personal work featuring his wife and set in Suffern, New York. This month’s series has been equally profound, pairing the photography of Jason Fulford alongside excerpts of posthumously published work from Adam Gilders, titled Another Ventriloquist.

“Jason was a good friend of Adam’s and along with some other friends found over 200 pieces of writing after Adam’s death on his computer,” Anna explains.

Each volume is a limited edition offset print run of 250, and Abe’s Penny goes out to almost 200 subscribers all over the globe.

“They get ripped in the mail but that’s part of what I love about it–there are layers that the photographer contributed and then there’s the writer and me putting it together, and Anna and I hand-writing and stamping everything, the machine cancelling the stamp, and then the postman delivering it,” Tess explains. “Everything makes the final issue more tactile, time-sensitive and special.”

Humor writer Jake Goldman will represent Abe’s Penny at Slice Magazine‘s literary competition and reading, Piethos, this Saturday at DuckDuck in Williamsburg. The Brooklyn-based Goldman became a contributor to Abe’s Penny after seeing a set of postcards that featured a short story by his friend, Adam Wade.

“I was in a really bad writing slump at the time and getting rejections and not writing,” Goldman says. He submitted a few short stories to Abe’s Penny and was paired with Hilary Basing, a Brooklyn photographer with a penchant for Jane Fonda and dilapidated buildings.

“She sent me a bunch of pictures and then I picked the ones I wanted to write to. Abe’s Penny was the first piece of serious fiction I ever published,” Goldman says. He and three other artists will each present writing based on prompts provided by their peers–the winner receives a pie. Readings begin at 5:30.