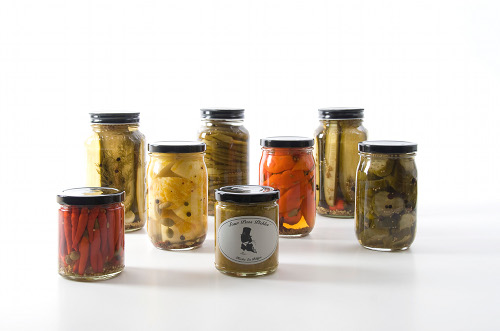 Sour Puss Pickles are sold around NYC, most recently at the DeKalb Market where they offer prepared foods made with their pickles

It seems we Brooklynites can never get enough pickles. Between producers like McClure’s, Brooklyn Brine Co. and Rick’s Pick’s, you can find everything from ramps to watermelon rind, jarred and preserved with adventurous spice blends. Yet despite the pickle craze, Chris Forbes and Evelyn Evers of Sour Puss Pickles are the among the few artisans in our briny borough using locally sourced veggies straight from nearby farms. Their production schedule is tied to whatever area farms are harvesting that month, making for unique pickles that pay homage to the true reason pickling began: to enjoy local, seasonal produce year-round.

Forbes, a Chicago native, and Evers, who hails from Jacksonville, began Sour Puss in 2009 with the goal of creating small-batch, locally sourced pickles unlike any others in Brooklyn. Since then, they’ve been honored with a 2011 Good Food Award, and have fostered relationships with farmers and local vinegar producers throughout the tri-state area. We caught up with them for some pickle war stories, a little Sour Puss history, and were even graced with a late summer pickle recipe.

What inspired you to go into the pickling business? What did you do before starting Sour Puss?
Both Evelyn and I were in the restaurant business, and have been around food for quite some time. I had been pickling on a casual level for a while and decided to give it the whole pickling thing a go. We saw a definite void in quality, sustainable practices and strict adherence to locally sourced ingredients, in terms of jarred items. We felt that if such wonderful ingredients could be served at high end restaurants, then why not be preserved for home use as well.

You locally source everything from your vegetables to your vinegar. What is that experience like? Do you work your pickling schedule around whatever the farms have available?
We do work our pickling schedule around what the farm has available, which is partly responsible for the large number of items we have available. There are quite a few challenges with using local ingredients, but we made the choice to use local based on quality. It just wouldn’t feel right to pickle asparagus in the middle of summer, or to be preserving something from Florida. The art of preserving is based around locality, traditionally. It is very simple: pickling and preserving are methods we use to enjoy items when they are out of season. So, if something is available year round–on a global level–and it is being preserved, then we have gone astray and are only manufacturing foodstuffs, not pickling.

To alleviate some of the obstacles with being seasonal, we have made some great relationships with the farmers we work with and a few, beginning this year, have started to grow items exclusively for us. Talking with the farmers who are responsible for growing such wonderful items is one of my favorite aspects of being a small-scale pickler. 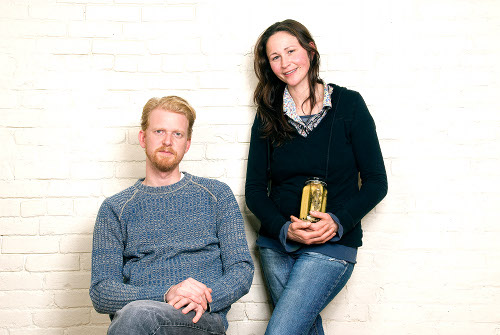 How long have you lived in Brooklyn? Where do you live?
I have lived in Brooklyn for about six years, as has Evelyn. We both live in Crown Heights and work out of the same neighborhood, which is pretty convenient.

What do you enjoy about working here?
Brooklyn has a lot to offer culturally that a lot of other locales lack. I like to be challenged and at times part of a larger like-minded social collective. I think that most Brooklynites are forward thinking and really expect a certain quality of life. It is nice to say that I am part of a business based in Brooklyn, even though my roots are elsewhere.

How is life in our borough’s pickling community? Do you all tend to overlap and network, or are you mostly off doing your own mad scientist thing?
In most cases we don’t overlap, physically and/or ideologically. There is definitely some amazing culinary/business talent within our small community. We do run into each other every so often and it is always nice to share our pickling war stories. In most cases we are busy in the kitchen. In our case, that may mean anywhere between 16-20 hours a day during high season.

What’s your favorite Sour Puss pickle?
I tend to like the items that I can cook with. So, the hot peppers (thai chilies, lantern peppers) and the scapes are some of my favorites. I also have been really enjoying some of our non-vinegar based, fermented items like our spiced seaweed sauerkraut and half-sour pickles.

Would you consider sharing a recipe with us? What’s best for pickling in late summer?
Late summer is a great time to pickle beans. Our spicy wax beans are a bit out there, but we have been toying with this naturally fermented bean recipe lately:

Method:
Add water and salt along with a pinch of bay leaves to a pot and bring to a boil.
Reduce heat and add cumin and mustard seed; let simmer.
Blanch the green beans for about two minutes and immediately add to an ice water bath.
While the beans are cooling, grate some horseradish.
Fill a sterilized gallon jar/crock or about three quart jars with horseradish and beans (after being drained and dried).
Pour the hot brine over the beans (make sure all the spices get into the jars).
Cap with a sterilized lid and put in an air-conditioned room (55 degrees) for about three days.
Transfer to the refrigerator and let ferment for another week or two.

And then you have fermented beans, which are full of probiotics and also delicious.

What’s your worst pickle war story? Any memorable recipes or experiments that just didn’t go as planned?
We’ve had our fair share. I think the worst had to be when we had to get a large order out and I think we stayed up for at least two days (it was only Evelyn and myself at the time) processing batch after batch of curried cauliflower. I remember feeling only numb and upset after the shipment was picked up with no sense of accomplishment, as I knew that if those jars were sold anytime soon, the flavors wouldn’t have enough time to develop. These last couple of years has been a complete learning process and we have learned to keep up with demand and control it from our end, thankfully.

I was sad to see our corn relish go. I thought it was delicious, but it was so inconsistent and we could never get a good grip on it. Maybe we’ll bring it back in a different form sometime.

You pickle Ghost Peppers, which are known to be the hottest peppers on the Scoville scale. How do you suggest a person use them without causing serious bodily harm?
Definitely use just a bit to cook with. They are hot and we always warn those buying them to consume with care. But we love to pickle them and I cook with them often, in sauces and to make spicy relishes.

Where are Sour Puss pickles sold?
We are at small specialty grocers in and around Brooklyn, Manhattan, Washington D.C., Boston, Chicago and San Francisco. We are always at the Fulton Stall Market, the New Amsterdam Market and most recently the Dekalb Market, where we will be showcasing prepared foods maybe with a pickle or two included in the ingredient list.

Court Street Grocers and Bedford Cheese Shop both carry a large selection of our pickles.

Maria Gagliano is a writer, book editor, and co-publisher of Slice Magazine. She’s a Bensonhurst native living in Park Slope, where she’s teaching herself to sew, garden, pickle, preserve, and bake like her Sicilian family. She chronicles her (mis)adventures at pomatorevival.com.