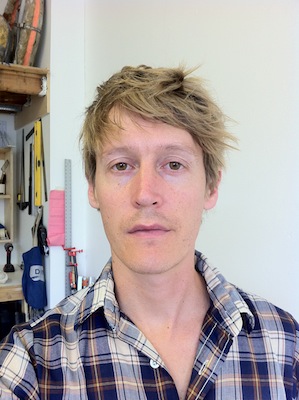 Since the turn of the millennium, the Brooklyn Museum has taken quite a few steps to engage locals and draw in visitors. It introduced a low-cost “socially networked” membership and extended hours. It continues to host Target First Saturdays, complete with dancing, performances, and gallery talks, which have boasted record numbers. And though the museum has been knocked for catering to popular taste–like when it participated in the Bravo reality show, “Work of Art”–it also rose above the dip in attendance that prompted the New York Times to ask arts leaders to sketch a new future for the museum. Some, like artist William Powhida, called for more exhibitions of Brooklyn artists, and it would appear as though the museum paid attention.

This Friday, September 16, the museum will kick off Raw/Cooked, a year-long series of five solo exhibitions by up-and-comers from the Brooklyn arts scene. Thanks to sponsorship from Bloomberg, five emerging artists from the borough will showcase their work for ten weeks apiece. Not only will Raw/Cooked mark the first major museum show for each of these artists, they’ve also been given the rare chance to interact with the museum’s collection and display spaces.

While the museum has sporadically shown work by local artists–like Fred Tomaselli’s mid-career retrospective last year–the last time we saw a major, Brooklyn-oriented exhibition was 2004’s Open House, a huge group show of over 300 pieces by more than 200 artists. One thing that distinguishes Raw/Cooked from previous programming is that the series is scheduled to run continuously for a year.

According to Eugenie Tsai, the museum’s John and Barbara Vogelstein Curator of Contemporary Art, the museum has long been interested in working with local talent. But proper funding was an obstacle until recently. “Bloomberg, which is sponsoring the series, was looking to fund a program of under-the-radar Brooklyn artists…so sometimes it just works out,” said Dr. Tsai.

Brooklyn is, after all, one of the world’s foremost creative centers–the wall text for the show states that the borough is “host to more artists than any other place in the country.” Based on recommendations from a board of established Brooklyn artists like Ron Gorchov, Michael Joo, Paul Ramírez Jonas, Amy Sillman and Mickalene Thomas, Dr. Tsai visited emerging artists’ studios. These potential candidates were also asked to propose projects. Dr. Tsai then selected the final five: Kristof Wickman, Lan Tuazon, Heather Hart, Shura Chernozatonskaya, and Ulrike Müller.

The artists have been encouraged–but not required–to use the museum’s collection in their exhibitions. “One of the things that we can offer, that’s a little bit different from some other institutions,  is the ability to show contemporary art in a historical context,” Dr. Tsai said. “We found that the artists have been enthusiastic about working with older art.”

They even get to choose where they want their work installed. “Rather than looking for a white cube in which to do this series, it seemed like it [was] an opportunity to create a dialogue between contemporary and historical, in terms of art and also in terms of space.” So far, all of Raw/Cooked’s projects will be located in different places within the museum.

Raw/Cooked’s first installment features pieces by object-maker Kristof Wickman, who is based out of Bushwick. According to Wickman, being chosen came by “total surprise.” 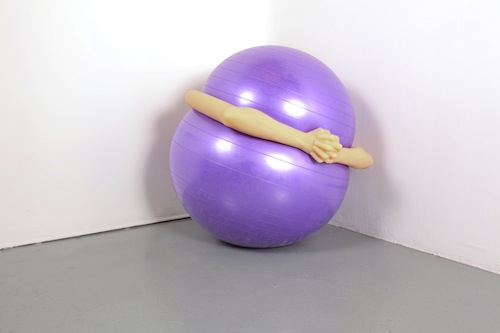 Wickman's sculptures often have a humorous bent, like this exercise ball, titled "Self-Portrait"

Wickman is a craftsman whose casts of seemingly ordinary objects demonstrate remarkable attention to technique. His playful sculptures employ materials such as silicone, plastic lumber, aqua resin, pigmented plastic and a neoprene exercise ball. A common theme in the upcoming exhibition is the presence of the human figure, or the implied presence thereof.

Wickman plans to incorporate four items from the collection into his display:  a mahogany bust of a young boy, a kneeling chair, an alabaster urn from ancient Egypt and a small Rodin bronze. He chose pieces that have “a humorous quality, or sort of an amorphous bodily shape… They’re all from different collections, and putting them all on one level surface, nothing is more important than the other thing. With the exception of the Rodin, the works are functional, so by displaying them in any sort of fashion they’re taken out of their life as a functional object.”

Over a dozen works, roughly half of which he specifically created for this exhibition, will be on display in the Mezzanine Gallery.  “(That gallery was) too tempting to not use,” said Wickman. “Because it’s an open white space, it lends itself well to an object-based show.”

“I think the premise [of the series] is brilliant,” Ramírez Jonas explained. “The are two things that museums have in abundance: objects in their collection that don’t get a chance to be seen, and tons of extra ‘in between’ and odd unused spaces. Pairing these two things with the right artist can yield great results.”

Regarding Raw/Cooked’s Brooklyn-specific bent, he offered the following critique: “First and foremost anything the museum can do to support emerging artists is great, and I support it wholeheartedly. On the other hand what is a ‘Brooklyn’ artist? Artists move to New York City from all over the world and where they settle is mostly determined by economics…Young artists can just as easily end up in Queens.”

“Nevertheless,” he continued, “there is a decades-long tradition of Brooklyn being the residence of many New York artists; it makes sense for our ‘local’ museum to create connections with one of its natural constituencies. I only wish there were more opportunities like this one–there are many great emerging artists out there and they all need a break.”

Raw/Cooked , A Series of Five Exhibitions by Emerging Brooklyn Artists. First Exhibition of Work by Kristof Wickman on view September 16-November 27, 2011 at the Brooklyn Museum.