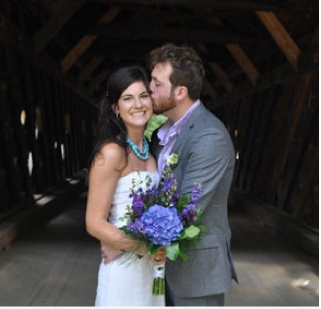 Since we started hosting Wedding Crashers two years ago, we here at Brooklyn Based have started thinking about weddings and the goods and services that surround them more than two married gals normally would.

A few months ago it occurred to us that there’s really nowhere to list your wedding, or your engagement, in Brooklyn. The New York Times is incredibly selective, and you have to get that weird duo head shot, and Craigslist? A world of no. So we started our own.

We’ll post engagements, upcoming weddings and recent weddings on our BB Weddings page. To cover the cost of writers (yes, we pay them) and hosting, we’re charging $25 per listing, but the first 20 are free! Check out the details for listing your special day here.Or, go straight to Engagements, Just Married! or Upcoming Weddings to fill out our form and submit. Also, Wedding Crashers 2012 will be held on Sunday, March 4 at The Green Building.

To show you what sort of listings we’ll be whipping up, we used BB sister, and brother-in-law, Lauren Griffin and Jake Loiko, as guinea pigs. Here’s our reprisal of their recent nuptials:

Lauren Griffin and Jake Loiko on the August 20 wedding day.

Lauren Griffin and Jacob Loiko may have known each other since kindergarten, but they aren’t your typical high school sweethearts.

“The first time we met we were playing Teenage Mutant Ninja Turtles in kindergarten,” says Lauren. “Jake was a turtle with sweet nun-chuck skills, I served up construction paper pizzas–Ninja Turtles’ favorite food. We were constantly in the same class throughout grade school, but went our separate ways in high school. Jake had pink hair, I was a band geek. It wasn’t until we both dropped out of college and moved home for the winter that we started hanging out. We were working at the local ski resort, I was selling tickets. I heard a familiar voice over the intercom, and it happened to be Jake, working the basket room. He invited me to a party that night, and the rest is history.”

Today, the pair live in Ridgewood, Queens, and Lauren, 27, manages Champion Coffee in Greenpoint, and is the nanny for a 9-year-old. Jake, 28, works as set constructor and prop builder for TwoSeven Inc. in Bushwick. They moved to New York about five years ago after stints in Florida and in Westchester, working as a nanny and manny.

“We’re from Vermont and there was never any question whether we’d get married there,” says Lauren. Their August 20th wedding, held in Perkinsville, Vermont, relied on help from friends and family, from the location scouting to the first dance to the food. “The night Jake proposed we were having dinner with my best friend and her parents at their house. Describing what we wanted for a venue–a private house rental big enough to sleep a ton of people, a barn for dancing and a huge lawn–my friend’s parents suggested a house on their road. The next day we went to investigate and fell completely in love with the place. The second I saw it I couldn’t picture us getting married anywhere else.”
Finish reading on BB Weddings>>>