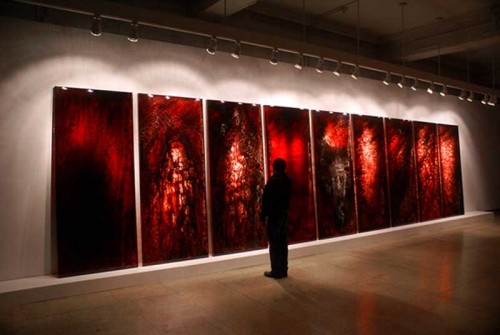 Installation view of "Bar 1-9," 2009 by Jordan Eagles, on view at Causey Contemporary through Sunday, Oct. 2

Walking into “Hemoglyphs” at Causey Contemporary in Williamsburg, the immediate sensation is one of tentative pleasure—it’s beautiful, but something inside tells you that “beautiful” isn’t the right word. The paintings are by New York artist Jordan Eagles, and the hesitation you feel is because of his chosen medium: blood. Salvaged slaughterhouse blood, to be exact. His work may sound morbid, polemical, or worse, ostentatious, but then you would be missing the point. Eagles is a painterly alchemist whose creations, while suspicious from a distance, reveal themselves to be strikingly innovative and complex.

“Bar 1-9” (2011), which occupies the entire left wall of the gallery, immediately pulls the eye in its direction. It is a series of eight-foot high panels in which blood, encased in UV resin, drips, splatters, congeals, crystallizes and dissipates into patterns of geometric intricacy. Surprisingly, the color is anything but chromatic, as the tonality of the blood seems to rise and fall throughout each panel. In some places the hue is a fluid and translucent scarlet, in others a flaky burnt umber with washes of amber in between. When light hits the panels, the effect is a lively luminosity, which is slightly unnerving, seeing as the blood preserved in these panels has long since ceased to sustain life.

After over a decade of experimenting with blood as a medium, Eagles is quite adept in its manipulation. Every piece in the show is from 2011, and he completed “Bar 1-9” in only 18 days. His work has also begun to move off the wall, with some, like the “Configuration” pieces, becoming free-standing sculptures. Three of these works are shown here, and are perhaps the most poignant of the show.

Each “Configuration” is constructed in the shape of a coffin, and sits eerily on the floor. Crouching down to stare through the blood-stained glass, it is strange to be looking into a “coffin,” yet to see the remnants of a body on the outside instead of hidden within. It is here, too, that the reference in the title of the show—Hemoglyphs—is strongly echoed. The figuration of the blood, trapped in its slow descent down the side of the glass, becomes a pictorial language similar to the hieroglyphics that decorated Egyptian sarcophagi many millennia ago.

There’s something atmospheric about this show, something that stays with you after you leave. Part of it is the scale, much of which is imposing and ethereal, similar to the work of the Color Field painters. But what lingers primarily stems from his choice to take something that runs through each of our veins and make art of it.

Eagles isn’t using bodily fluids to make a political critique (like Andres Serrano’s infamous “Piss Christ” of 1987), but he is leaving you with a host of allusions from which inquiries can grow. Life and death, the preservation of the former through evidence of the latter, the sacredness of the body and the profanity in the display of its remains–these are all themes that are catalyzed by his work. So, go to Causey Contemporary, stare into the hemoglyphs, and see what thoughts you find.

Jordan Eagles: “Hemoglyphs” is at Causey Contemporary through Sunday, Oct. 2.