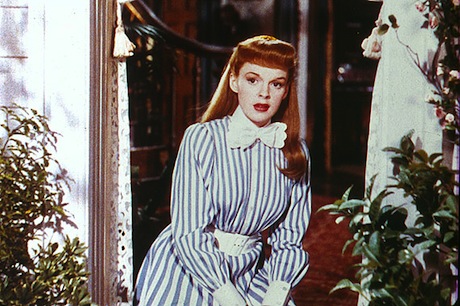 Judy Garland in "Meet Me in St. Louis," one of many acclaimed musicals by the multi-genre director, Vincente Minnelli

To 21st century filmgoers, Vincente Minnelli may be most familiar as the director of the musical masterpiece Meet Me in St. Louis, a film that led to two more indelible moments in Hollywood history: his marriage to its star, Judy Garland, and a year later, the birth of their daughter Liza.

His musicals, the genre he’s best known for, include Best Picture Oscar winner An American in Paris (1951—Oct 8), full of soaring Gershwin songs and the fancy footwork of Gene Kelly and Leslie Caron; the beloved Gigi, which swept the 1959 Oscars with nine awards including Best Picture and Best Director (Oct. 30); his final musical starring Barbara Streisand, On a Clear Day You Can See Forever (1970—Oct 24); and the first that launched his directorial career, Cabin in the Sky (1943), which kicks off the series tomorrow, September 23. The film’s all-black cast was unusual for its day, but the all-star talents—Ethel Waters, Lena Horne, Louis Armstrong, and Duke Ellington—guaranteed its rightful place as a classic.

Minnelli was a master of more than musicals, though, and this retrospective, the first comprehensive one to screen in New York in over 20 years, is a chance to appreciate his fabulous range. The series includes melodramas like the Lana Turner and Kirk Douglas vehicle, The Bad and the Beautiful (1952—Sept. 24), lavish productions like his adaptation of Madame Bovary (1949—Oct. 7), the Van Gogh biopic Lust for Life (1956—Oct 9), and comedies including the original Father of the Bride starring Elizabeth Taylor and Spencer Tracy (1950—Oct. 11).

Seeing even one film in this series is a chance to rediscover this Hollywood giant and reconsider Minnelli’s legacy as one of cinema’s greatest artists. You could even win a pair of tickets if you tell us the film you’d most like to see by tomorrow at noon. We’ll choose six winners at random who email us their pick or tweet it using the hashtag #Minnelli.

Check out the full schedule here, then RSVP to the Minnelli series on Facebook.