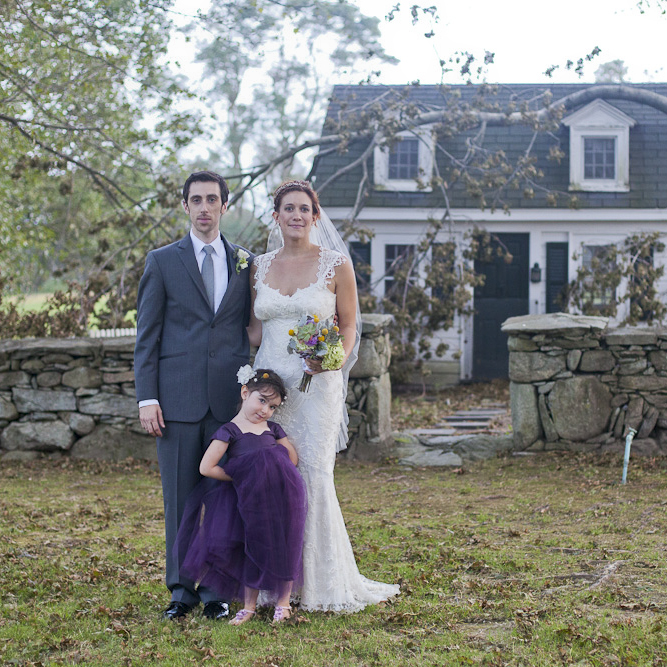 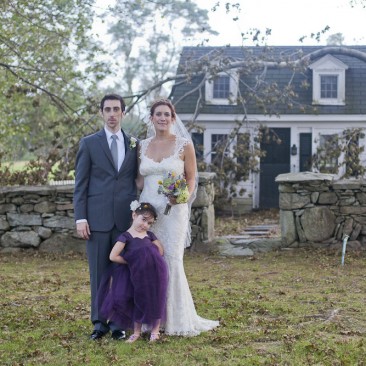 Photo by A Couple of Cameras

The couple, who have a 4-year-old daughter named Ellie together, both work in the arts. Tim, 29, is a motion graphics artist and editor for television and Kristina, 29, owns her own local business, PhotoPetit which specializes in infant, child, and family portraiture. Their incorrigible middle aged min-pin, Maycee, is also an essential member of the family.

Tim and Kristina’s ceremony was held in the gardens at the farm, and the reception was steps away at a historic restored barn. The couple chose Rhode Island because Newport was the first place they took a vacation together–alone–after Ellie was born. They decided that very weekend to return for their wedding. The bride’s beloved aunt was ordained as a minister and performed the ceremony. Close friends from college and as far back as elementary school made up the wedding party for both bride and groom, and many of them lent their talents to the day. Tim’s brother, Brian D’Amico, was the best man. The maid of honor, Lisa Naccara, is a talented musician and played violin along with the bride’s twin brother, John Gibb, who is a sound engineer and guitarist. The bride’s cousin, singer, Alicia Smith, sang Caresse sur l’océan by Bruno Coulais in her lilting soprano. The wedding photos were taken by A Couple of Cameras, a New York based company.

The couple’s daughter was of course the flower girl, in a beautiful plum-colored tulle dress, because she so loves to dance.

For their first dance, Tim and Kristina surprised their guests with a choreographed number to the tune of Say Hey (I Love You) by Michael Franti. After a few minutes the bridal party to joined in, with a show-stopping entrance.

While the couple have been sharing their lives for some time now, and marriage hasn’t significantly changed that, they are relieved to finally be able to use the terms “husband” and “wife.” Before their wedding, saying “girlfriend” or “boyfriend” didn’t really seem to cut it, considering they’d been together for years and were raising a child. “Domestic partner” sounded overly clinical and not indicative of the love they felt for another.

The best moment of the day for the pair was when they waited in anticipation together outside the barn reception just before the dance. The ceremony had been lovely and they were now officially joined, but the lights and music inside the barn and the glowing sun setting behind them reflected the energy and optimism of their love. Tim and Kristina both said that in that moment, “we felt so happy and so alive.”